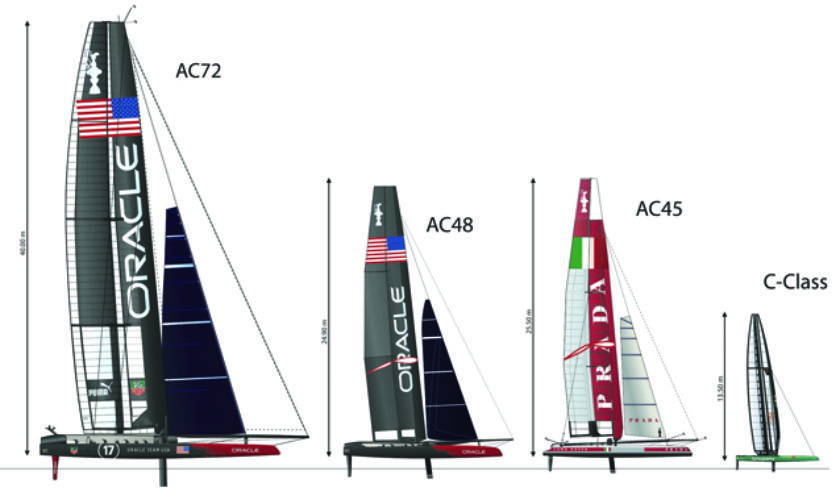 A Landlubber’s Guide to the America's Cup: Battle of The Boats

Since the inaugural race in 1851, the America’s Cup has been on the leading edge of sailing technology. But it wasn’t until 1983, when the Australians unveiled a radical new “winged keel,” that technology became the dominant force in America’s Cup racing.

Following the Australians’ unprecedented win over the Americans—who had won each consecutive America’s Cup until that point—technological advances have been at the heart of the America’s Cup, with teams using cutting-edge materials and radical designs to gain the upper hand over their competitors.

In 2013 those designs reached new heights in the form of two new boats—the AC72 (72 feet) and a scaled-down version, the AC45 (45 feet), which was used for the preliminary training and racing. Using innovative wing sail designs and hydrofoils, the yachts were able to achieve almost three times the wind speed, skipping along at a clip of up to 47 knots, or 55 kilometres per hour. If they were on the roads instead of on water, older Bermudians would complain non-stop about them.

Wait a second. How can a sailboat travel faster than the wind speed?

The speeds reached by the AC72 and AC45 defied all predictions, and at first glance, the numbers appear to defy logic as well. Instead of traditional cloth sails attached to a mast, the America’s Cup yachts used fixed rigid wing sails. This enabled the boats to exploit the Bernoulli principle—the same thing that makes planes fly—by creating a difference in pressure on either side of the sail, generating lift. In simpler terms, a wing that is parallel to the ground creates upward lift, while a perpendicular wing creates forward lift, or in this case, forward motion through the water.

But moving through the water is a problem in itself. The AC72 weighed seven tonnes. To get around the challenge of pushing all that boat through the water, the yachts used hydrofoils that extended beneath them, enabling them to sail without any part of the boat’s hull in the water.

After reaching around 20 knots, the boats pop up out of the water so the weight of the boat is carried on the carbon fibre foils, which can take up to 15 tonnes of pressure. By being entirely out of the water, the reduction in drag allows the boat go between 10 and 15 per cent faster.

What can we expect to see in Bermuda?

For the 2017 America’s Cup, teams have chosen to race a smaller version of the speed demons that carved up San Francisco Bay in 2013: the AC48. While the AC48s will not be seen until the finals of the America’s Cup in 2017, you can get a pretty good idea of what they look like during the America’s Cup World Series this October, when teams will be racing standardised AC45s.

Sweden’s Artemis have already begun their training in miniature foiling catamarans that require just two people to sail. Artemis and Oracle are using Phantoms, while BAR is using a Nacra 500. Between now and 2017, teams will be using these to test out the new technologies that will be featured on the AC48s in the finals.

Before the new tech makes it onto the final boat, however, teams will be testing on “tricked out” AC45s. Oracle already appear one step ahead of the competition after unveiling the AC45 Turbo in April, a “tricked out” version of the standardised yachts that will be raced in October. Not only does this allow them more time to learn about the race course and the wind conditions, they’re also able to test out the cutting-edge technology that will, fingers crossed, get them across the finish line first.

Who should I root for?

By all means, go with your gut, or national allegiance, but at the end of the day a win for Oracle is a win for Bermuda. If Oracle are able to dominate the competition, and find Bermuda to be everything they hoped for when they chose our home as the venue for the 2017 America’s Cup, there’s a very good chance the next America’s Cup will be held here as well. And that’s something we all should be hoping for.