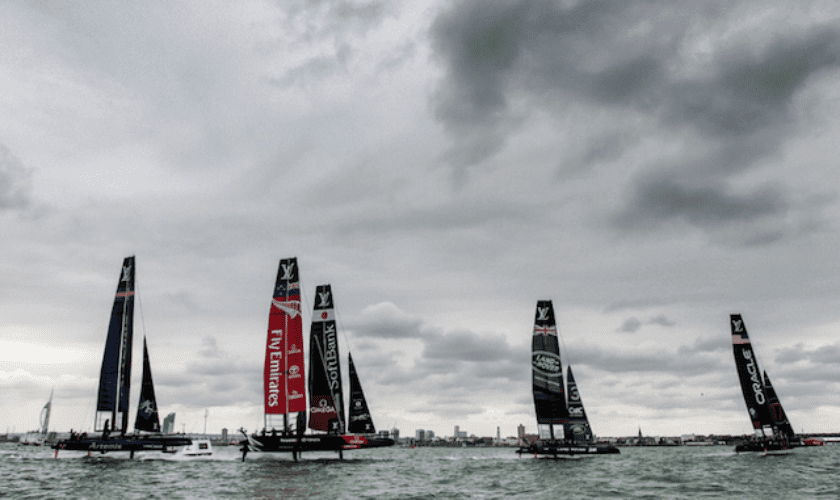 Five of the six current America’s Cup syndicates agreed this March to a new framework for the competition that would see it be held every two years, making it easier to raise sponsorship for the multi-million dollar costs of fielding a team, and giving clarity for sailors, fans and broadcasters.

The agreement will determine the format for the next two America’s Cup events, the design protocols and class rules. But, in keeping with tradition, the winner of the 35th America’s Cup this June will decide where the next one is held.

The new framework would also see the total cost of fielding an America’s Cup team reduced dramatically, to anywhere between $30 and $40 million.

The deal has taken more than a year to hash out between the teams, but the agreement was reached in a rare showing of co-operation between the competitors.

“As much as we want to kill each other when we go on the water, its good to see we can come together and be logical and have a common sense approach,” said Jimmy Spithill, Oracle Team USA’s skipper.

The one team that was not on board with the new framework, Emirates Team New Zealand (ETNZ), was notable in its absence as teams gathered at the headquarters of jewellery maker House of Garrard, where the trophy was originally crafted in 1848.

Prior to the new agreement, the winning team became the event’s trustees, with the ability to outline the terms for following events until they lost. This often meant long gaps between events and costly legal battles as teams wrangled over right and wrong, something ETNZ views as something that shouldn’t change.

Skipper Glenn Ashby was reportedly apprehensive about the signing the agreement in July last year, when it was still only a proposal, concerned over the restrictions it could impose.

“In many ways as a commercial team this is something one would have thought they (ETNZ) would wholeheartedly support because it’s laying the foundations for the commercial teams of the future,” Ben Ainslie, skipper for Land Rover BAR, told Reuters news.

As of press time, the future of the America’s Cup is in the hands of ETNZ. Unless the team changes their stance, victory in the 35th America’s Cup could put the new framework into doubt.

Ainslie, along with the other skippers behind the new plan for the Cup, was optimistic ETNZ will come on board.

However, if ETNZ does not sign up to the deal and wins this year’s Cup, they would then be in the driving seat, potentially throwing the new accord into doubt.

• The America’s Cup World Series (ACWS) will start, at the election of the defender, as soon as Q4 2017. Venues, sponsors and media partners will be approached over the next six months to secure up to 12 international events over the next two years.

• The first year of the ACWS will be raced in AC45F foiling catamarans—the same boats used in America’s Cup World Series (ACWS) in the 35th America’s Cup.

• The second year will see a transition to the America’s Cup Class (ACC) boats, the same technically sophisticated class of boats raced in Bermuda in 2017 (with a slight rule modification to extend the wind range in which they can race to 4 to 26 knots). After this transition to the ACC, the AC45Fs will be retired from the America’s Cup competition and the ACC boats will be the only boats raced.

• To reduce costs, teams will not be permitted to build, test or train on AC45 surrogate boats as they have in this cycle of the America’s Cup.

• This above will repeat for AC37, with the exception that all racing will take place in ACC boats.

• There is no mention of a nationality clause within the framework agreement.