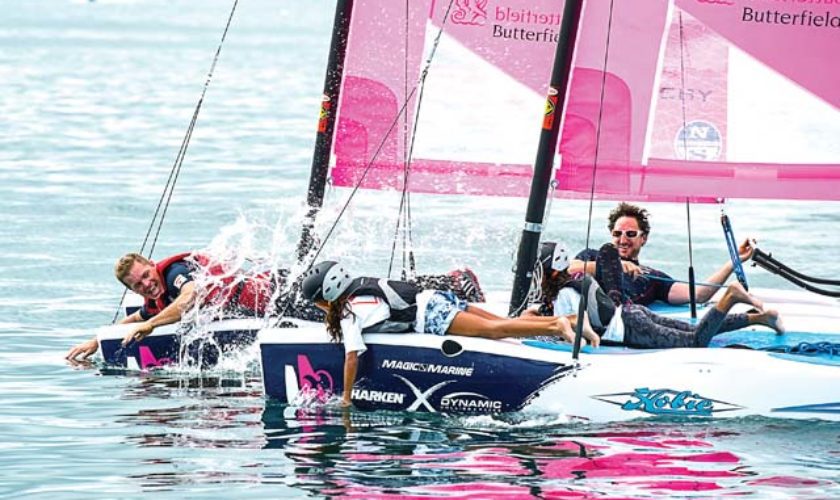 Take a look at the Wikipedia page titled “Bermuda at the Olympics,” and you’ll come across an interesting statistic. Bermuda has sent athletes to every summer Olympics since they began in 1936, save for when we joined the boycott in 1980 protesting Russia’s invasion of Afghanistan. Of those athletes most, albeit not all, have been sailors. The only Olympics we haven’t sent sailors to, at least in recent memory, was the 2008 Olympics in Beijing, when Peter Bromby narrowly missed out on qualification. For an island where sailing is a year-round sport and a national pastime, it’s somewhat of a curiosity that Clarence Hill is the only athlete to have earned a medal, and in boxing no less. Compared to the performance of young Bermudian sailors at international regattas throughout the years, the lack of national Olympic achievement becomes even more curious.

The issue is far from a simple one, but there is one limiting factor a sport like sailing faces when it comes to producing world-class talent. Unlike track and field, or soccer, or cricket, anyone who wants to sail must first be able to afford a sailboat, or at the very least afford to attend one of the many sailing programmes around the island. Even those who can afford to get into sailing at its most basic level must then be able to finance their own progression in the sport, graduating into new sailboat classes and paying for top-level coaching. These financial hurdles only get bigger the more a sailor progresses, and are a much-bemoaned bugbear of Bermudian sailors dreaming of international achievement.

But a solution is on the horizon.

The chief objective of the America’s Cup Endeavour programme, launched in August 2015, is to teach young Bermudians STEAM education (science, technology, engineering, arts and mathematics) through the practical application of sailing. It gives students, aged between eight and twelve, a chance to participate in a sport that is financially inaccessible for many, while translating their regular curriculum into real-world experience. Wrapped up in that humble objective, however, is the hope of creating a new and much larger generation of Bermudians pursuing sailing—be it competitively, recreationally, or as a career—by providing clear pathways and infrastructure for support.

“The advantage Bermuda has is that it doesn’t take very long to get to a club,” said the 27-year-old from Wales. “Some kids in the UK have to travel an hour and a half to get to a sailing centre, which is ridiculous. You’ve also got a year-round climate here, and what I call the ‘paddling pool’ effect. Bermuda offers three stages of sailing: beautiful, natural harbours, which are safe to go out into and learn to sail on, then you’ve got the Great Sound or St. George’s Harbour as a next step up, and then if you really want a challenge you can go along north or south shore where you get ocean swells. You can’t really do that anywhere else in the world.”

After working for the Royal Yachting Association, where he was in charge of creating participation and retention within the UK for sailing, windsurfing and general water activity, Herbert-Evans joined the Royal Bermuda Yacht Club in 2012, before taking on his new position with the America’s Cup last year.

“When it comes to getting more performance out of sailors, you need to start at the grass roots and have those pathways to facilitate kids to get to that level. That’s one of the great things about the Endeavour programme. Bermuda hasn’t got a national water sports or national sailing centre, and you can’t just build one and expect it to work. What would make sense for Bermuda is to have an establishment you can combine with something like the AC Endeavour programme, and then all the other strings would come of age on their own. As kids develop and come through the programme, you’ll have that performance training aspect and the maritime training aspect as well.”

For programme coordinator and teacher Katrina Williams, AC Endeavour is already on its way to achieving that goal.

“We put around 300 children through the government sailing programme every summer,” said the 27-year-old Bermudian. “Endeavour is putting 1,500 kids through the programme every year. So imagine in five years, when they’re at an age to try out for the Red Bull Youth team, how many more kids are going to be vying for those spots.”

The prospect is a salubrious one, but one that is secondary to the far more grounded goal of teaching young Bermudians via the sport itself.

For students in P5 and P6, Endeavour offers a two-day after-school programme in partnership with the Department of Youth and Sport, giving them a brief taste of sailing and hopefully whetting their appetite for the far more involved week-long programme reserved for Year 7 students.

For the week-long programme, students are taken out of the classroom and onto the water, where Williams and the other Endeavour coordinators teach the regular M1 curriculum through practical application on the water, sailing Hobie Waves, Optimist prams, RS Fevas or Open Bics, all of which have been donated by the programme sponsors.

“On day-one, the students are asked to draw examples of what sailing means to them.” The responses, said Williams, are often surprising.

“Some kids have obviously seen a lot of America’s Cup stuff, and they draw catamarans. Before it would have been an Opti, or a single-handed boat, but they see sailboats as cats now. And then we see things like: ‘Sailing is going out to open sea and fishing with your friends.’ One kid drew what was pretty much a Viking ship that didn’t even have sails—no water, no indication of creative thinking. But by the end of the week, you see them drawing specific details, like the mainsheet, the sails, the wind and the waves and the fish and their friends, which is great to see, because sailing is not going out to sea and fishing.”

“What they’re learning they’ve already learned in school, most of the time. There’re some new elements, but it’s more about practical application of stuff they already know. For example, instead of measuring the area of a triangle, they’re measuring the area of their sail, or applying the concepts of buoyancy and density to experimental learning, teaching the kids to find out why a boat with more surface area is able to go faster than a smaller one, and they find these answers themselves.”

Through this, the programme hopes to set children onto three separate pathways: recreational, competitive and occupational sailing. For the more eager students, there is then a summer sailing programme they are offered the chance to attend, after which they may be given one of the 15 Optimist prams that have been donated by the Royal Hamilton Amateur Dinghy Club.

“Any child who wants to continue after the M1 programme can have an Endeavour Opti, which will be theirs to sail at a local club, becoming responsible for that boat and committing to sailing a certain number of days every year,” said Herbert-Evans.