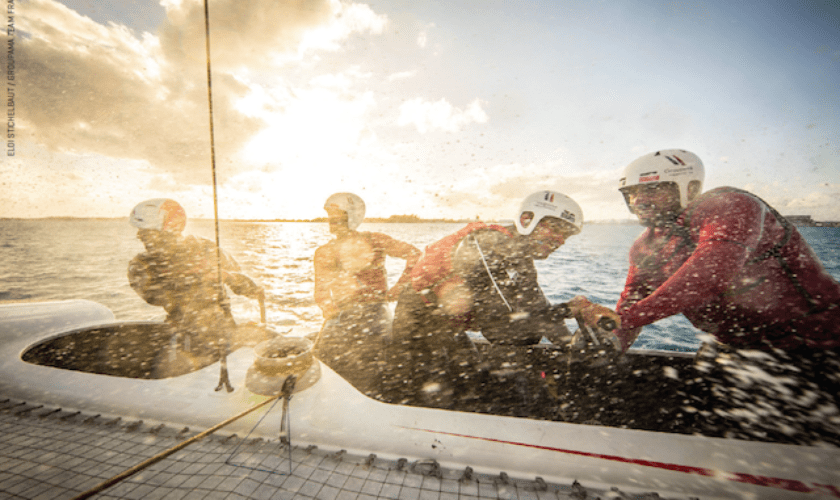 To abandon a race means to stop racing prior to a yacht having sailed the course.

The line that marks the limits of the racing area.

A yacht is capsized when her wing is in the water.

A yacht finishes when any part of her hulls cross the finishing line from the course side after completing any penalties.

A sailboat with wing-like foils mounted under the hull. As the craft increases its speed the hydrofoils lift the hull up and out of the water, greatly reducing wetted area, resulting in decreased drag and increased speed. A sailing hydrofoil can achieve speeds exceeding twice the wind speed.

A crew member whose duties include operating manual winches (called “coffee grinders”) that raise and trim the sails and move the boom. It is a physically demanding role with a significant impact on a racing yacht’s overall performance.

An object the sailing instructions require a yacht to leave on a specified side, and a race management vessel surrounded by navigable water from which the starting or finishing line extends. An anchor line or an object attached accidentally
to a mark is not part of it.

An object that a yacht could not pass without changing course substantially, if she were sailing directly towards it and one of her hull lengths from it.

Boat designed to the same set of rules and built from the same yard.

The nautical term for the side of a boat that is on the left when one is facing forward.

An allegation made under rule 61.2 by a yacht, the Regatta Director or the Jury that a yacht has broken a rule.

The space a yacht needs in the existing conditions, including space to comply with her obligations under the rules of Part 2, while maneuvering promptly in a seamanlike way.

The nautical term for the side of a boat that is on the right when one is facing forward.

A yacht is on the tack, starboard or port, corresponding to her windward side.

To terminate a race means to stop a race after one or more yachts have sailed the course or, if in a Match Race, a yacht has been disqualified.

The mesh installed between the hulls.

To pull the sails in.