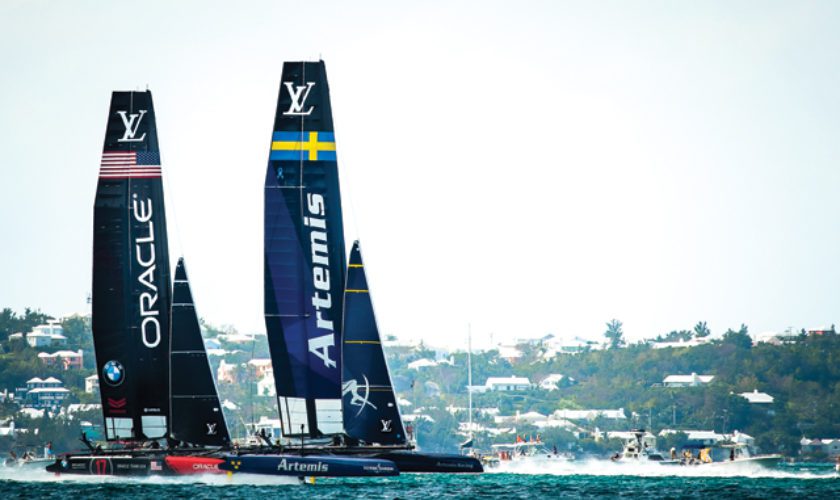 A Landlubber's Guide to The America's Cup: Opinion

There’s this scene in the 5th season of Seinfeld. Newman, the villainous mailman, comes slithering into Jerry’s apartment pleading to borrow the talents of a lip-reader Jerry had recently met. When Jerry says no, Newman leaves, but not before delivering an ominous warning. “You remember this – when you control the mail, you control the information!”

The reason this comes to mind is because Bermuda Industrial Union chief Chris Furbert discovered this January that when you control public transport, you control The America’s Cup.

Or so he thought.

In one sense, it’s hardly a shock. Mr. Furbert putting the priorities of the country above his own is an ever-increasing rarity. What was surprising – and telling – is the hill upon which he chose to deliver his ultimatum. Unless Reverend Nicholas Tweed was issued a new work permit, and the airport redevelopment deal was reconsidered, he warned that “The America’s Cup is in great threat of being derailed.” Two days later and union members voted to end the work stoppage. Neither issue had been resolved. Threatening The America’s Cup, it seemed, was a step too far – for both the union members and the opposition government.

“The OBA government has committed in excess of $100 million of taxpayer funds to support The America’s Cup,” said PLP Shadow Tourism Minister Jammahl Simmons in response to Mr. Furbert’s ultimatum. “While we share the concerns of many Bermudians, that the benefits of the event may not be as inclusive, far-reaching and diverse as they could and should be, the PLP will continue to assist in ensuring The America’s Cup is a success for the benefit of all Bermudians, as Bermuda cannot afford anything less.”

Mr. Furbert’s threat, however empty, is an answer to the question that is on a many Bermudian’s minds: why should those millions of dollars be invested into a gaudy spectacle for rich white people, when it could be spent fixing the other myriad issues facing our country?

It’s a fair question, truth be told. For example there aren’t many good excuses why the Seabright Outfall continues to dispose of untreated sewage close enough to shore that, with the right wind, it gets washed up onto the beach. Or why the roads are crumbling apart after every heavy rain. It costs money the government has deemed more important and allocated elsewhere.

The simple answer, the one everyone has heard already, is economics. Gross spending during the event is estimated to be around $250 million, money Bermuda’s businesses and Government desperately need, but it would be disingenuous to suggest that the majority of residents will directly benefit from that return on their tax dollar’s investment. So why care? Why support The America’s Cup when it does nothing to solve the very real, very important problems in your life? At the end of the day, it all depends on how you view fiscal policy. Nobody can tell you The America’s Cup matters more than fixing up the T.N. Tatum Middle School if you believe the opposite.

But in our wrangling over these questions of finance, we’ve been missing the trees for the forest. The America’s Cup is about a lot more than money spent and money earned. Don’t say it out loud – I even hesitate to put it in writing – but The America’s Cup might be the new engine for social mobility we’ve so desperately needed. Not because the business it brings will generate jobs, or that it will remind snooty yacht owners of our existence so we may benefit from their spending, but because it offers us the chance to claim a new national identity – or rather, reclaim a long forgotten one.

Modern sailing is a Bermudian invention. It is our greatest contribution to the world, and the legacy we will leave behind when our tiny island is inevitably swallowed by the sea from whence we came. Yet our connection to that heritage is spoken of today in the past tense, cited most often as an interesting factoid. It’s unfortunate, but sailing’s decline from a fundamental part of the Bermudian experience to middle-class hobby is far from inexplicable. It used to be a necessity. Now it’s not. And unless rising sea levels force us to rebuild our society in the image of Kevin Costner’s ‘Water World’, that’s not going to change any time soon.

But sailing isn’t just a hobby. It’s also a sport – an incredibly lucrative sport, as The America’s Cup has shown us. More specifically, it is a sport in which Bermudians have consistently established themselves among the best in the world. If it wasn’t for Peter Bromby’s failure to qualify for Beijing in 2008, we would have sent a sailor to every Summer Olympics in modern history. And that’s through barely even trying. Imagine how we might do if we made winning an Olympic medal in sailing a national priority. We have in our homeland the perfect conditions and institutional knowledge to produce world-class sailors, but there’s always been one major limiting factor. Competitive sailing is, like, stupid expensive.

A middle class family might be able to pay for sailing summer camps at one of the island’s yacht clubs, but indulging a child’s interest beyond that takes a financial commitment many cannot afford – and that’s just to get started. Competing on the international level takes the kind of budget very few parents can even dream of, let alone hope for. We could give every Bermudian their own private sailboat, but none of us will win a gold medal if we can’t afford the coaching and travel expenses required to compete at the highest levels.

But this is not a problem we have idly lamented. For the past decade or so, we’ve slowly begun working to change these aforementioned realities, to make sailing accessible for all Bermudians, not just those that can afford it.

The Spirit of Bermuda is a monument to the pursuit of that goal. Thanks to their work, thousands of children have been given the chance to partake in something that was once an integral part of our collective identity, something they might have gone their entire lives without experiencing. Beneath her signature swept masts, young Bermudians have learned the value of cooperation and leadership, the importance of responsibility, the joy of a well-earned rest, the exhilarating nervousness that grips you when you realize that land is nowhere in sight. They’ve learned to love the sea.

Along with Spirit, the introduction of the Endeavour programme by The America’s Cup, designed to give every public school child the chance to sail atop our beautiful waters, it might be that the next generation of Bermudians will find it hard to believe anyone could grow up on this island without ever experiencing the sport. And then there’s our America’s Cup Red Bull Youth Team. Not only does it offer a direct path towards a professional sporting career as an America’s Cup sailor, the entry requirements are nothing more than hard work and determination.

Which brings us – finally, exhaustingly – to the point of all this. The America’s Cup doesn’t just offer us the chance to make the sport accessible for all Bermudians, it offers us the chance to remind the world of the one thing we’ve always done better than the rest: sail. Increased exposure will mean increased interest from sponsors, and if we play our cards right, it might not be long before we have companies willing to fund an entire Olympic campaign. Just imagine if a Bermudian won Olympic medal… if a black Bermudian won an Olympic medal… in a sport whose whiteness is perhaps rivaled only by show jumping!

But to give ourselves the best chance at seeing this through, we need to show The America’s Cup, and the world, that when it comes to sailing, you won’t find a country more thrilled to have you. That starts with not treating The America’s Cup as a political bargaining chip, and more like the incredible opportunity it offers. It’s not ev
ery day a country is given the chance to resurrect its heritage, let alone re-cast it in the name of inclusivity.