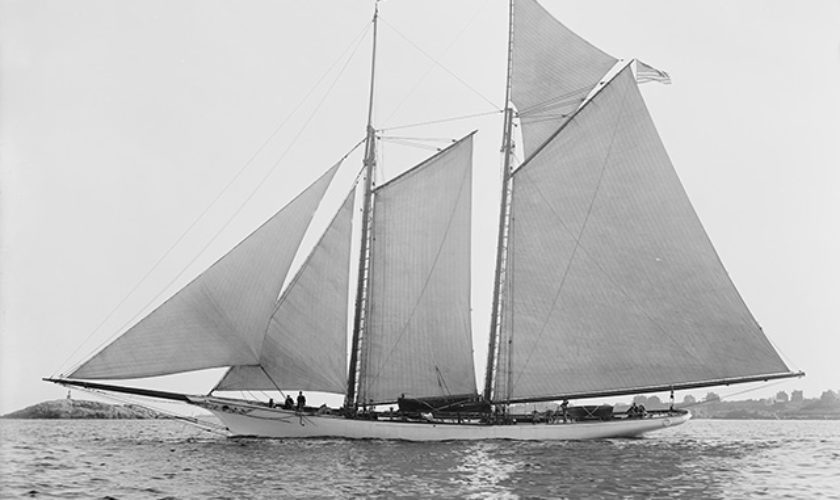 Sailing is a thinking man’s game. Skippers learn to search for wind shifts in the way the sun shimmers on the waves or shuddering ripples belie a favourable “puff”—a pocket of low-pressure on the course signifying stronger winds and an opportunity to gain ground. You watch your opponent, anticipating their next change of course, reacting to use the rules of the game to your advantage. Like chess, it is about controlling your opponent while sacrificing as little as possible.

At least, that’s the romantic vision. And the sport of sailing tends to attract a lot of romantics.

For more than 150 years, regardless of romanticism, the grandest display of this thinking man’s game has been the America’s Cup. Today, critics—and there are a lot of them—argue this is no longer the case.

Since winning the Cup in 2010, Larry Ellison’s Team Oracle USA has changed the sport so drastically many can’t even bring themselves to call it “sailing.” In April last year, Hall of Fame French skipper Bruno Troublé called it “a vulgar beach event smelling of sunscreen and french fries.”

Ellison’s iteration of the Cup is splitting the world of sailing, engaging new followers but alienating much of the preexisting fan base at the same time. In his search for a more exciting spectacle, Ellison has dramatically changed both the way in which the racing itself unfolds and the skills required to sail the new machines.

It’s an old-timey, almost fusty argument. But in a sport filled with fusty old-timers, their concerns are hard to ignore.

It all began in 1851 as a “friendly competition between foreign countries,” when America and Britain’s most prestigious yacht clubs—the New York Yacht Club and the Royal Yacht Squadron—raced each other one-on-one around the Isle of Wight. The NYYC’s schooner America won the showdown, thus the Cup’s name.

The trophy, known as the “Auld Mug,” was donated to the NYYC in 1857 under the terms of a Deed of Gift, a legal document residing with the New York Supreme Court that allows other countries to challenge for it in a one-on-one match race. The Deed of Gift also sets out many of the rules and guidelines for the race. Like most sports, these rules and regulations have evolved drastically over the years to encourage favourable elements inherent in the game. Unlike most sports, the ability to make such changes has always lain with the current champion.

It’s this quirk that is at the heart of the America’s Cup fans’ displeasure. The reigning champions get to select the venue and rules for their title defence, including what kind of boats are used. To put this in context, imagine if the winner of the Super Bowl was allowed to change the rules for the following NFL season.

For 127 years the reigning America’s Cup champion was the NYYC, until they were beaten by the Royal Perth Yacht Club’s Australia II in 1983, ending the longest winning streak in the history of professional sports. During that time, the Cup experienced few changes.

Teams raced on 65- to 90-foot yachts owned by wealthy sportsmen until 1958 when the NYYC made changes to the Deed of Gift to allow smaller, less garishly expensive 12-meter class yachts to compete. A selection series was also started in 1970 to accommodate multiple challengers, the winner of which earns the right to race the defending champion. In 1990, the boat designs were changed again to the International America’s Cup Class (IACC), which was used until 2007.

While there had been grumblings of displeasure beforehand, it wasn’t until Ellison’s BMW Oracle Racing, representing the Golden Gate Yacht Club, won the Cup in 2010 that these voices really started to be heard.

For the 2013 contest, Ellison “set a goal far more daunting than simply securing another trophy as the world’s finest sailor: making the America’s Cup financially viable.” The most high-profile change in pursuit of this goal was the introduction of a new kind of boat: the AC72.

Instead of the lugubrious single-hulled boats of old, the 2013 contest was raced on two-hulled catamarans that fly above the water on hydrofoils, reaching speeds near 50 mph. The rationale was that this high-speed iteration of sailing would attract people unfamiliar with the sport through sheer spectacle alone.

While the 2013 America’s Cup was most certainly a spectacle, it left many of the sport’s oldest fans angry, for myriad reasons. Continuing with the NFL analogy, Ellison’s changes are akin to replacing the traditional pigskin football with something produced by Nerf, allowing quarterbacks to huck the ball 90 yards with a flick of the wrist. If the thought makes your skin crawl, that’s precisely how many fans feel about the current Cup format.

“…it’s terrible. It’s embarrassing. These boats are too extreme, too expensive,” read a 2013 opinion piece in the New Zealand Herald.

“Having a pure speed contest in one-design multihulls is no longer the America’s Cup. The old Deed of Gift is in tatters,” wrote author Roger Vaughan.

In the simplest of terms, winning in a monohull match race requires controlling your opponent and finding the shortest distance between markers; winning on foils is done by losing the least amount of speed. This emphasis on speed—commonly referred to as “velocity made good”—means skippers and tacticians approach things very differently from what the average sailing fan is used to seeing and analysing. The argument is that in the quest for speed, the nuances that made the sport of match racing have been lost. “The racecourse becomes a lottery as teams bounce off course boundaries, praying they’re in phase with Mother Nature,” as one writer put it. It’s no longer “a thinking man’s game,” rather it has become the ultimate test of fund-raising and technology.

Furthermore, the change has repercussions for sailing as a whole. As the pinnacle of the sport, becoming part of an America’s Cup team is the dream of top sailors everywhere, but very few have access to flying catamarans. This means the majority of competitive sailors are learning and training an entirely different skill set than the one required at the top of the game.

A Different Type of Sailor

For the best illustration of this, look no further than the current skipper of Sweden’s Artemis Racing, Nathan Outteridge, widely regarded as one of the sport’s most promising talents.

Back in 2012, I and some other Bermudians living in London packed our bags for a quick jaunt to Zadar, Croatia. It was the 49er World Championships, and the last chance our friends Jesse and Zander Kirkland had of representing Bermuda in the London Olympics.

As relative newcomers to the 49er—a skiff that emphasises pure speed over tactical nous—the Kirklands’ progression up the rankings was more impressive than it might seem. Like a foiling catamaran, the 49er is lightweight and lightning quick, which means it’s also terribly unforgiving. Mistakes on such a boat result in much greater losses against your opposition on the course, and can happen with much greater frequency. Also like the foiling cats, this means a skipper’s primary objective is to maintain their momentum and gain as much speed as possible, rather than search for and exploit advantages offered by the wind.

But the Kirkland brothers—like the majority of competitive sailors—were chess players at a drag race. While their eventual qualification for the Olympics is deserving
of its own story, it was the difference in sailing between them and the eventual winners Nathan Outteridge and Iain Jensen that really stood out.

“The way he glides over the waves is just different,” Jesse explained to me later. Normally, there’s little you can do when swells are striking your bow and slowing you down. Outteridge, he said, was seemingly unaffected. He glided over the waves instead of ploughing through them.

Outteridge would go on to win the gold medal in the London Olympics, and was rewarded with the position of skipper at Artemis Racing as a result. While his progression through the sport represents the path others should take in order to reach the America’s Cup, very few can afford such an endeavour. Skiffs like the 49er may make for great America’s Cup sailors, but their high-end, lightweight design puts them beyond the budgets of most sailors and even most yacht clubs.

Ultimately, whether you enjoy the type of sailing offered by the current America’s Cup depends on you. There are still glimpses of the thinking man’s game, those calculated chess moves; they just happen a lot faster than anyone is used to. And regardless of what you think of Ellison, there’s no denying his flying cats are the most spectacular boats ever to grace an America’s Cup racecourse.

The prescient question at hand here is whether or not the Deed of Gift should be amended to allow a governing body to control the rules, rather than the defending champions. Ironically, it’s the sport’s most vehement romantics that are pushing for this change, wanting to strip away the most traditional aspect of the Cup in order to return it to a more traditional format.

But while the fusty old-timers busy themselves with outrage, the actual participants in the America’s Cup are having the time of their lives. You’d be hard pressed to find a single sailor aboard a foiling catamaran who prefers sailing in a single hull. Take that as you will.