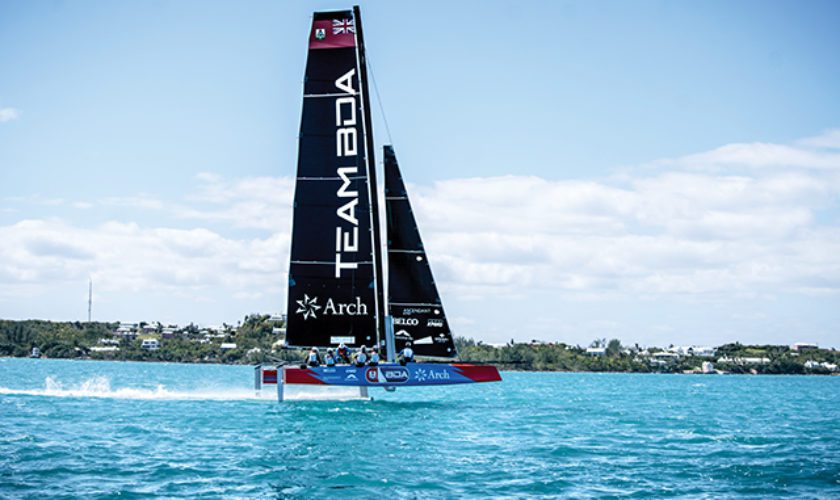 ‘‘This is a time for bold measures. This is the country, and you are the generation.” —Bono

TeamBDA will make history in the Red Bull Youth America’s Cup when it takes to the Great Sound in next week’s competition.

In August 2015, a call went out for the best young athletes in Bermuda to try out for TeamBDA, whether they had sailing experience or not. The final team of nine emerged from a series of grueling mental and physical assessments, and come from a variety of sailing and non-sailing backgrounds. The team has been training full-time since January of this year.

Now, with official training having started yesterday, the full line-up of the people who will be racing for TeamBDA has been announced. For the first time ever, two black sailors will feature in key positions on the AC45Fs being raced in the regatta.

Dimitri Stevens, helmsman, will drive the boat while Mustafa Ingham, wing grinder, will handle the winch that keeps the giant wing sail in the optimum position for speed. Stevens comes from a sailing background while Ingham had never sailed before, trying out for the team almost two years ago.

Stevens, 22, says: “I began sailing when I was 11 and now 11 years later to be a helmsman competing in the Red Bull Youth America’s Cup is a dream come true. This is the pinnacle of my sailing career and I’m so proud of my teammates.”

Ingham, 20, says: “Two years ago, I had never sailed and jumped on the opportunity to try out for TeamBDA. As a result of being on the team, I’ve had amazing opportunities that wouldn’t have come my way otherwise. I’m excited to compete next week and hope the entire Island comes out to watch our races.”

TeamBDA will sail in just one week’s time on the same racecourse as the America’s Cup races. The team began training in their AC45F on the Great Sound on Sunday and will continue to train for the rest of the week. The qualifying stages of the regatta are scheduled for 5pm to 7pm on June 12th and 13th on the Great Sound.

The roundup of the team members and their roles:

Dimitri Stevens – Helm, drives the boat, controls ride height by adjusting the angle of the front foils with push buttons near where he sits

Owen Siese  – Wing trimmer, adjusts the angle of the wing through his wing sheet, works closely with Dimitri on what mode the boat sails, also works with Mackenzie (Tactician) on general race course strategy.

Mackenzie Cooper (Skipper) – Tactician, decides where the boat travels on the race course, how it starts, where it tacks and gybes, and what mode it sails, also adjusts the tension of the running backstays.

Peter Dill – Jib/Code Zero Trimmer; adjusts the tension and setting of the two soft sails in the front of the boat.

Philip Hagen – Bowman, works at the front of the boat, lowering the foils, pulling up, or hoisting, the code zero (a large jib) and grinding the code zero.

Laura Cutler, Manager, TeamBDA says: “We are so excited to announce the team who will sail on the boat during the competition. Not only is it historic for Mustafa and Dimitri to be in the competition, but also for the entire team as it is Bermuda’s first time competing in this elite event.

“We encourage all of Bermuda to rally behind the team as we sail against some of the best youth sailors in the world. The team has trained diligently for the past six months and they are ready to do their best for Bermuda on the world stage.”

Watch TeamBDA on June 12th and 13th from the America’s Cup Village including Grandstand seating or the Goslings Dark ‘n Stormy ® Island Bar. With tickets available from just $10, please go to www.americascup.com/tickets to secure your place.

The Red Bull Youth America’s Cup Qualifiers feature two groups of six teams. The top four teams from each group will proceed to the finals, which take place on June 20th and 21st. TeamBDA will compete in Group B, along with teams from Austria, Great Britain, New Zealand, Spain and the USA.

The Red Bull Youth America’s Cup was developed to provide a pathway for youth sailors into the highest level of international sailing.

Many of the America’s Cup teams competing in Bermuda feature sailors that took part in the 2013 regatta in San Francisco, including Peter Burling who was the winning skipper for New Zealand’s youth team and is now the helmsman for Emirates Team New Zealand.

You can learn more about TeamBDA and the Red Bull Youth America’s Cup here: www.acbda.bm/teambda-home/