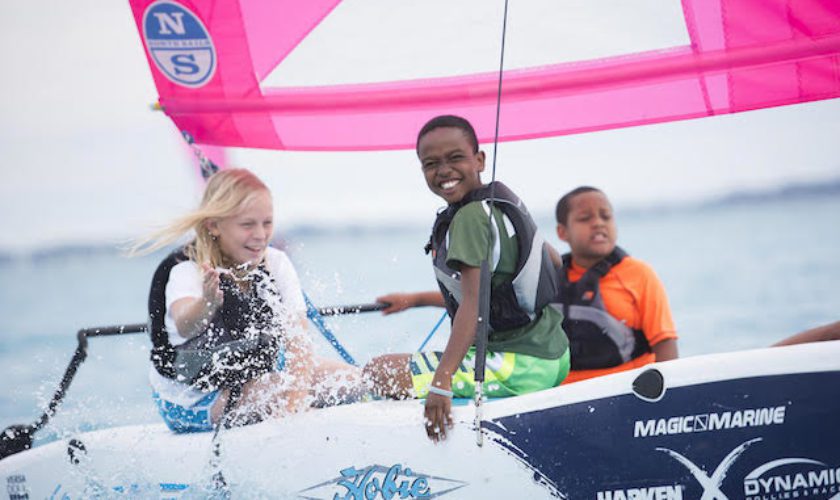 Every day throughout the 35th America’s Cup, from 26th May to 27th June, a range of family friendly activities, including a kids zone, will be on offer in the America’s Cup Village, and on America’s Cup Endeavour Day, on 28th May, the family fun will be ramped up even more. Among the features are a Hobie Wave sailing taster session that will be launched on the water for adults and children and which will continue on weekends throughout the event. Special programming will take place with Science From Scientists (check them out here https://www.sciencefromscientists.org/), samples of complimentary ice cream will be on offer and live local entertainment including The Simons Brothers Band, Bermy Bouncers Jump Rope Team, H&H Gombey Troupe and Gombey Evolution Troupe will be featured in the venue throughout the day.

Bermuda Residents can purchase a family pass for two adults and two children to attend America’s Cup Endeavour Day for just $48 via www.americascup.com/tickets. This can be found within the America’s Cup Village section of the ticketing portal.

On the water, 28th May is the third scheduled day of competition in the Louis Vuitton America’s Cup Qualifiers with racing due to start at 2:00 pm. SoftBank Team Japan will take on Emirates Team New Zealand in the first race of the day, followed by ORACLE TEAM USA versus Artemis Racing, Emirates Team New Zealand against Land Rover BAR and then SoftBank Team Japan will wrap up the day’s racing with ORACLE TEAM USA.

Nearly two years on since its launch, the America‘s Cup Endeavour Program has now engaged over 1,550 students aged 9 to 12 years old from diverse socioeconomic backgrounds across Bermuda. Every participant has been introduced to the sport of sailing in a uniquely designed, fun and interactive education program which features a Science, Technology, Engineering, Arts, and Math curriculum, known as “STEAM through Sailing”. In addition, hundreds of young people have been able to try sailing, many for the first time, and the initiative was also recently extended to the “No Limits” sailing program, through a partnership with BF&M and BASE (Bermuda Autism Support and Education), creating the chance for children with autism spectrum disorder (ASD) to also take part in America’s Cup Endeavour Program activities.