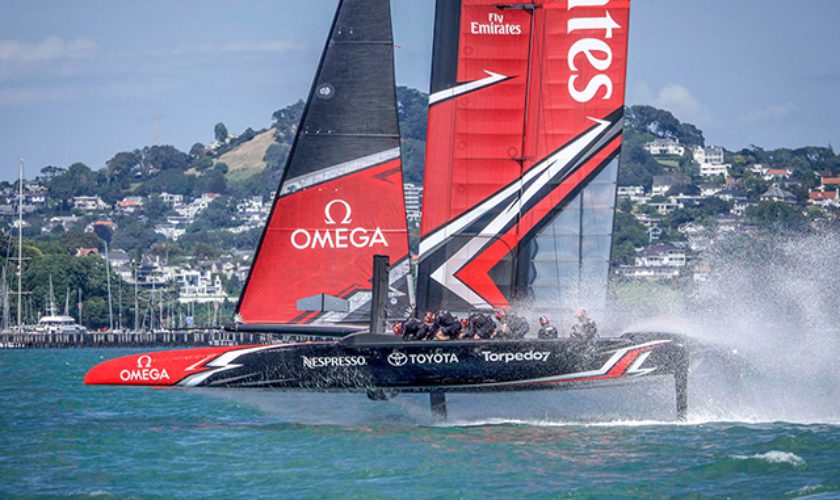 The Gang's All Here

The Emirates Team New Zealand (ETNZ) boat arrived in Bermuda on Monday, and all eyes will be on them leading up to the Cup. They are the team with everything to prove, and whose performance will tell us the most about the future of The America’s Cup. But why are they so late to the party?

It wouldn’t be an America’s Cup without some legal wrangling, and this year is no different. Due to an oversight in the Protocol Agreement establishing the rules for the 35th America’s Cup, there were no dates announced that allowed the teams to compete against each other in practice races, effectively creating a ban. A last-minute amendment to the Protocol allowed for practice racing, putting ETNZ on the back foot.

For anyone that wants to know how each team is performing, there’s no better way than to get out on the water and watch for yourself. The schedule for practice races is as follows:

What do we know from the practice racing so far? Oracle remains the team to beat, followed by Artemis Racing (SWE) and SoftBank Team Japan, respectively. Most surprisingly though, Land Rover BAR (GBR) have been drastically off-pace, despite having some of the best sailors in the Cup. Meanwhile, the agreed-upon whipping boys of the 35th America’s Cup, Groupama Team France, have shown little sign of presenting a credible threat to the rest of the field.

That leaves one, very big question.

Pretty good is the short answer. Footage from their training shows that they’re capable of sailing around the entire course without dropping from their foils. But just how fast they are remains a mystery, which is why the eyes of the sailing world will be on them once they hit the water. But there’s another reason for that as well.

As always, new innovations in sailing take center stage in The America’s Cup, and the Kiwis are leading that charge in 2017. After unveiling their new boat in February, they also revealed a potentially game-changing secret: they had replaced the grinding stations on the boat with four stationary-bikes, opting to use leg-power instead of arm-power to create the energy needed to work the boat’s control systems and maneuver the wing sail.

“These boats are very power hungry,” Dan Bernasconi, the design coordinator for Team New Zealand, told the New York Times. “With unstable foils plus a small racecourse requiring lots of manoeuvres, we can never have too much hydraulic power available. Leg muscles can obviously provide more power than arms. At the same time, it frees sailors’ hands to control the boat. The trade-off is that it’s harder to get from one side to the other in a maneuver, getting on and off the bikes.”

The innovation is so radical that if ETNZ’s stationary-bike design is the right one, everyone else is wrong. But this has further implications beyond the efficacy of generating hydraulic power.

This January, for the first time in more than 165 years, America’s Cup syndicates gathered together to agree on major changes to the competition’s framework for the next two editions of the race, specifically when and how they will be raced.

“This agreement is about a format long overdue in competitive sailing. The boats and the racing are incredibly exciting to watch – whether you are a sailor yourself or not. This will now reinforce The America’s Cup as the world’s supreme grand prix racing for sailing,” said Torbjörn Törnqvist, Artemis Racing’s Team Founder and Principal.

Crucially, though, ETNZ was the only team not to agree on this new framework, which makes their pedal-powered boat a lot more interesting. If the design proves to be a stroke of genius and they win, the natural result would be to replace grinding stations with stationary-bikes on all foiling wing-sail catamarans. But ETNZ’s vision for The America’s Cup is a more traditional one, and a Kiwi win would see the competition return to the mono-hulled sailing of old.