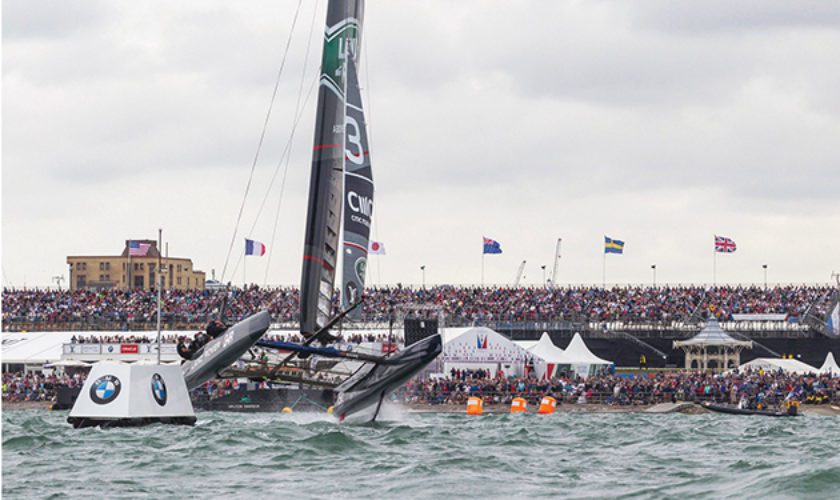 The Landlubbers Guide to the America's Cup: Racing the BAR

The ACWS is the first stage of competition in the 2017 America’s Cup and features all of the America’s Cup teams racing in foiling, one-design AC45 catamarans. For the top two overall finishers, the series represents an early opportunity to put points on the board that will carry forward into the next stage of the competition, the America’s Cup Qualifiers, in 2017. The winner of the Qualifiers earns the right to challenge the current champions, Oracle, in the America’s Cup Finals. So after seven stages and with two more remaining, where do things stand now?

BAR is leading the series heading into Round 8 in France, after taking the overall lead away from Emirates Team New Zealand with an outstanding weekend of racing on home waters in Portsmouth. The romantic would chalk it up to the 130,000-odd spectators cheering the home team on from the shores or the team’s knowledge of their local waters or the fact that skipper Sir Ben Ainslie was riding the high of welcoming his daughter Bellatrix into the world earlier that week. Either way, the most decorated sailor in Olympic history was as dominant as everyone predicted, including Iain Percy, team manager and tactician for Sweden’s Artemis Racing. “It would be amazing to me if he doesn’t come out on top, actually,” he told the BBC after the first day of racing. “Frankly this weekend, they’ve probably done 100 more days in this boat than anyone here.”

BAR have thrown everything they’ve got into earning the right to challenge Oracle for the America’s Cup and a chance at bringing the Auld Mug to Britain for the first time ever. The Royal Yacht Squadron lost the inaugural race to the New Yorkers in 1851 and Britain has failed to win the trophy 18 times since—most recently in 1964. The British challengers are now looking more and more dangerous as the series progresses, and considering Ainslie’s pivotal role in securing the cup for Oracle in 2013—he was brought in as the team’s tactician half-way through the race, helping mastermind the greatest comeback in sporting history winning eight straight races—newcomers BAR are looking like the team to beat.

BAR’s advantage in Portsmouth wasn’t an excuse for the other America’s Cup juggernauts, including Oracle, to give up chase. Skipper Jimmy Spithill arrived in the south of England with the express intention of spoiling Ainslie’s day, and nearly pulled it off after taking the win in two of the three races on Super Sunday, when the points up for grab are worth double. But a poor showing on day one, and two second places and a first by BAR on day two, left the champion just one point behind the Brits at the end of racing. Their day-two dominance put Oracle ahead of Emirates Team New Zealand—who have dropped to third—on the overall leaderboard, but despite being only one point behind Land Rover BAR in the overall series, Oracle have yet to notch
a series win, a monkey Spithill will surely be looking to get off his back come Round 9 in France.

ETNZ were perhaps the biggest casualties in Portsmouth, but their poor showing is little cause for concern. They were leading in the overall standings after winning the series in New York, but have dropped to third after weak performances in Chicago and Portsmouth. Despite the setbacks, the team’s pedigree and financial support means there’s little separating ETNZ from BAR as the main contenders for the finals.

CEO and skipper Dean Barker has a lot to prove. Barker was at the helm for Emirates Team New Zealand in 2013, and took the blame for what’s been called “the biggest sporting choke in sporting history,” giving up the America’s Cup to Oracle by failing to win a single race in eight attempts. After a very strong performance by Japan in Chicago, they failed to carry that momentum forward into Portsmouth. Despite not winning a single race, they have shown consistency that will serve them well in the battle for the top four positions at the end of the ACWS.

Having been led by America’s Cup newcomer Nathan Outerridge, Artemis had a new man at the helm in Portsmouth, which might explain their poor performance. Outerridge was in Rio for the event, leaving Francesco Bruni as skipper. The timing certainly didn’t work in the Swede’s advantage. While a series win in New York will give Outerridge some confidence, the team’s most recent performance means they desperately need to find their form in the two upcoming series in France and Japan if they are to advance into the qualification rounds.

The French were the last team to confirm their entry into the ACWS, but have proven their mettle out on the waters more than once. They are skippered by French sailing legend Franck Cammas, who is no slouch when it comes to performing well in new events after winning the Volvo Ocean Race on his first attempt. Cammas came into Portsmouth fully recovered after a gruesome accident while training when he got hit by the boat’s rudder, nearly detaching his foot from his ankle. He wasted no time in proving his worth to the team, posting a first, second and third place on the first day of racing in Portsmouth. Although they finished 5th overall, the French will take heart in the fact that their performance appears only to be hindered by consistency, rather than skill.