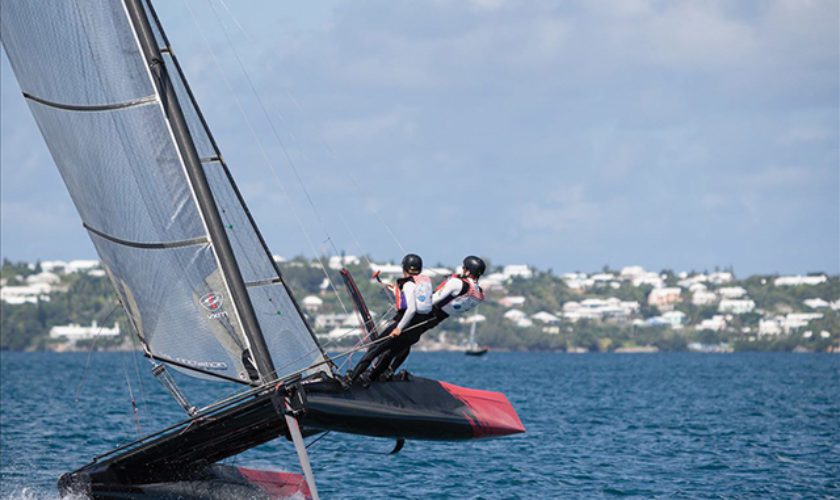 The Landlubbers' Guide to the America's Cup: Team BDA

After a selection process that began with 100 candidates, the final 11 members of Bermuda’s Red Bull Youth America’s Cup team were named this August. Over the course of 12 months and brutal training camps, the team represents the best Bermuda has to offer in terms of sailing skill and athleticism.

SIX YOUTH CREWS affiliated with current America’s Cup teams will compete in Bermuda next year, with up to 10 additional teams to be selected by sport directors and double Olympic gold medalists Roman Hagara and Hans-Peter Steinacher before the end of November this year.

From there, the field will be whittled down to the top eight teams after a qualifying series. Those eight teams will then race each other in the week prior to the America’s Cup Finals.

For the first time since the programme started in 2013, the racing will be done aboard the “flying” catamarans put on display earlier this year in the Louis Vuitton America’s Cup World Series, the AC45Fs. Hydrofoil technology has created boats that can go up to three times faster than the wind, lifting the hulls out of the water to ride on a carbon-fibre blade for minimum drag and maximum speed. The AC45Fs are capable of at least 37 knots, or roughly 43 mph.

Along with providing young Bermudians the chance to test their mettle against top competition from around the world, competing in the series also presents our sailors with the opportunity to put their skills on display, and translate their performance into a permanent spot with an America’s Cup team.

“The challenge gets even harder and more exciting as we add the foiling element to the equation,” said Steinacher, talking about the AC45F foiling catamarans. “I know we will be pushing these sailors outside their comfort zones, but that is why this is so compelling for the athletes.”

“I have no doubt the teams that make it to Bermuda are going to feature some of the best young sailors in the world,” said Spithill. “There is now a pathway that leads to the America’s Cup and the first step is with the Red Bull Youth America’s Cup.”

For 18-year-old Wollmann, the opportunity represents a chance to further her career. “I want to use the experience I gain from Team BDA in catamarans and my experience from competing in the 2016 Olympics in Laser Radials to possibly try a Nacra 17 campaign for the Olympics in 2020,” she told Bernews.

But Team BDA comprises not only sailors, and not everyone is looking to forge a career on the water. “I believe that this is a tremendous opportunity that is well-recognised worldwide,” 19-year-old Ingham told Bernews. “So being able to put this on a resume or just to be a part of it will benefit me no matter what I do in life. It has already made me fit and helped me attain a healthy lifestyle and network with professional
sailors.”

Twenty-year-old Danny Pell said Team BDA is “just the beginning for Bermuda’s young sailors. Hopefully we’ll be able to inspire the next generation of sailors, but also establish an infrastructure that allows them to transition seamlessly to new heights.”