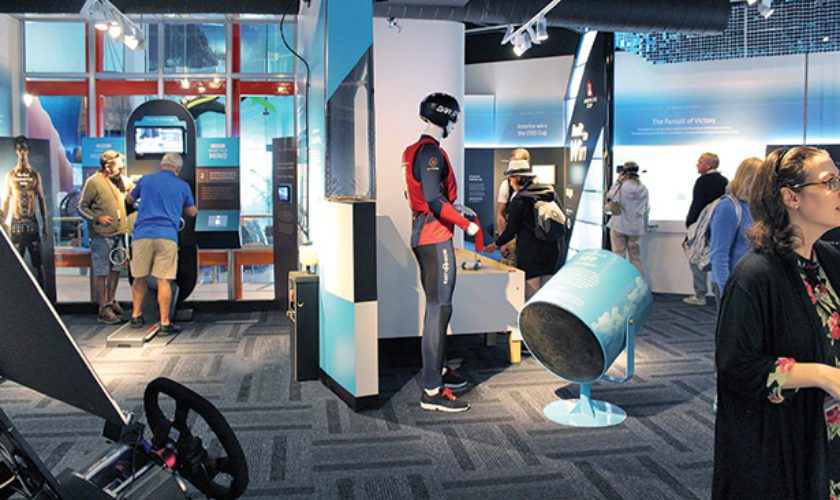 The Science Side of the America’s Cup

The new exhibit at the Bermuda Underwater Exploration Institute is a sailing nerd’s dream. And if you’re not already fascinated by the technical side of the sport, chances are you will be. Ahead of the 35th America’s Cup next summer, BUEI’s “Built To Win” exhibit gives you the perfect chance to delve into the Cup’s technological history and everything else that has made the boats of the America’s Cup what they are today.

Ever wonder what it was like to sail onboard the original America, for which the trophy is named, in 1851? Strap on one of the two Oculus Rift virtual reality headsets and find out for yourself. You’ll be taken on an adventure through the entire history of the America’s Cup, from the white-oak boats of the 1800s to the flying AC45s that speed across the Great Sound today.

The interactive exhibit focusses on three distinct aspects of the America’s Cup: the evolution of boat-building materials, sail technology, and the athletes that are competing—presented in the most fun and engaging way possible.

Along with samples of the original keel and sails from the America, you can see firsthand how the materials used for building these technological dreams have evolved from all-natural materials to advanced composites of aluminum and carbon fibre.

Ever wonder how exactly it’s possible for a sailboat to go faster than three times the wind speed? The exhibit covers that as well, from interactive explanations on the fabled foils to a custom-built rigid wing sail that you can trim yourself.

Finally, the exhibit gives you a glimpse into the lives and roles of the America’s Cup athletes. Today, the men aboard an America’s Cup boat aren’t just sailors. They’re plucked from a talent pool of swimmers, rowers, rugby players, and from other sports that require extreme strength and endurance. Learn what it takes to be one of these top athletes—from their diet to their fitness regime—as well as the various positions they take up on the boat itself.