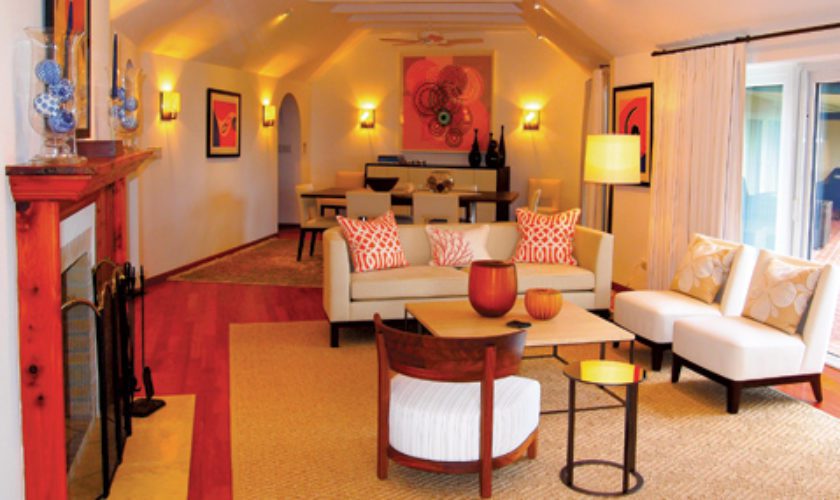 Honourable Mention: Bacardi on the Rocks

Drawing inspiration from the homeowners’ magnificent art collection, Tripp West and the staff at Westport Architecture redesigned Bacardi on the Rocks and transformed it from oppressive and dark to light, bright and inspiring, just in the nick of time.

Originally from New York, the homeowners fell in love with Bermuda and purchased Bacardi on the Rocks but chose to wait before renovating. “The owners bought the house furnished and lived in it for two years before they decided to change anything,” says architect Tripp West. “Although the décor was not their taste, they wanted to see how they used the house, what worked and what didn’t. It was a good exercise because once they decided to start the project, they had very strong ideas of what they wanted.”

Initially, both the homeowners and West agreed on a small list of features within the home which needed to be redesigned, namely the couple’s master suite, including the master bedroom, bath and closet space. However, once renovations got underway, it was apparent more changes should happen.

“During the renovations, we encountered issues with the existing air conditioning, which was in the ceiling, and we discovered that we had to replace the central systems. This created an opportunity to open up the ceilings and use the space that the ACs occupied and as a result, the space was dramatically transformed,” says West. It was so transformed, in fact, that after seeing the results in their master suite, the owners decided to transform the ceilings throughout the rest of the home as well.  West says this is the design element he considers the most successful because it ultimately saved them from having to build an extension to the house, as the transformed spaces created just enough volume.

To accentuate the newly freed space, West settled on a neutral colour palette for the home, which allowed the owner’s sublime art collection to take centre stage.

The neutral palette was complemented by large windows, which allow copious amounts of natural light to shine in and add to the organic environment created by the warm wooden floors and warm woods used to frame doorways and bookshelves.

The space was finalised with a beautiful master bathroom, which was designed using glass tiles and teak countertops, accentuating the natural, organic feel of the redesigned home perfectly. West also served as interior decorator on the project choosing exquisite pieces for the family that complement their art beautifully.

The project only took six months to complete. West explains they had to finish quickly as the couple welcomed their second child during the renovation process. West credits Westport’s contracting company, C.W. Construction, as well as Westport’s team of sub-contractors (Niche’s Electrical; After Hours Plumbing; Surface Trends Ltd.; GSC Ltd.) for pulling off the project in record time.