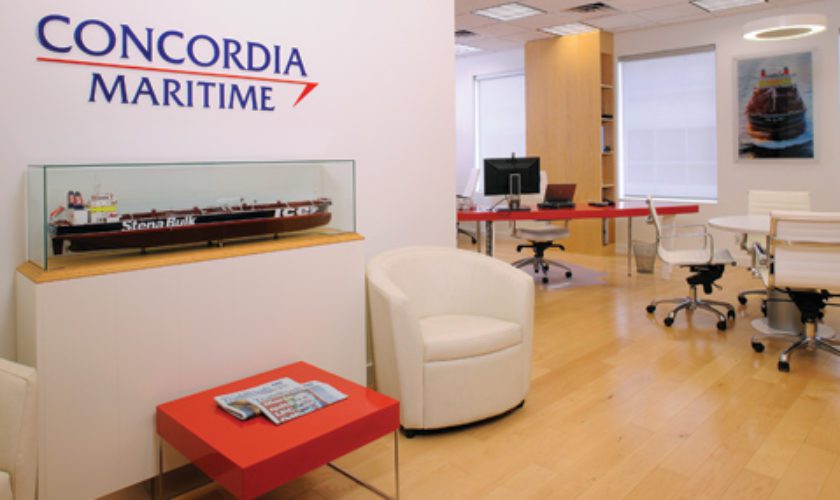 International tanker shipping company, Concordia Maritime (Bermuda) Ltd., headquartered in Sweden, was in dire need of an overhaul when they enlisted the help of Jason Mackertich of Botelho Wood in November 2010.

The outdated office space was formerly divided into three disconnected areas, which altogether totalled only 750 square feet. This lack of square footage was made worse by inadequate storage methods and dysfunctional floor plans.

The new design called for open space in lieu of additional square footage. It was important that the space be designed so that it could be shared by both the general director (who spends most of her time alone in the office, as she is the Bermuda branch’s only employee) and visiting clients and staff who frequent the office space for meetings periodically.

Mackertich chose to improve the lighting throughout the space to create a more open concept, thus creating the illusion of added square footage. A combination of light fixtures, including a hanging chandelier, recessed lighting and wall sconces, helped to achieve the desired effect. Light wooden floors were also used to brighten the space and mimic the light, bright and airy feel found in Concordia Maritime’s European offices. Mackertich accentuated the newly brightened space by locating the workstations closest to the exterior window wall while locating the infrequently used spaces, such as the bathroom and kitchen, on the interior.

Mackertich was impressed by Concordia Maritime as a company and drew inspiration from its corporate colours.

“The client was a major influence on the design,” says Mackertich. “They allowed for a more fluid design, and all were keen to move away from the traditional modular office design.” The new design happened to be a nautical theme, reflecting the company’s core business.

Mackertich was most inspired by the company’s nautical colours: red, blue and white, and used the combination throughout the space, particularly in the general manager’s desk, which was custom built to mimic the shape of the bow of a ship and coloured red to brighten the work space. “The curved workstations were designed to reflect the bow of the ship with a strong work colour that reflects Concordia’s shipping fleet,” says Mackertich.

Indeed, the corporate inspiration doesn’t stop there: the art incorporated into the space is all related to Concordia Maritime, with images of the company’s P-Max vessels mounted on the walls and a model of the company’s ship greeting guests at the waiting area.

Concordia Maritime’s newly renovated Bermuda office officially embarked on her maiden voyage in May 2011, with all involved deeming it a successful venture, as did our judges who awarded Concordia Maritime and architect Jason Mackertich a well-deserved honourable mention.