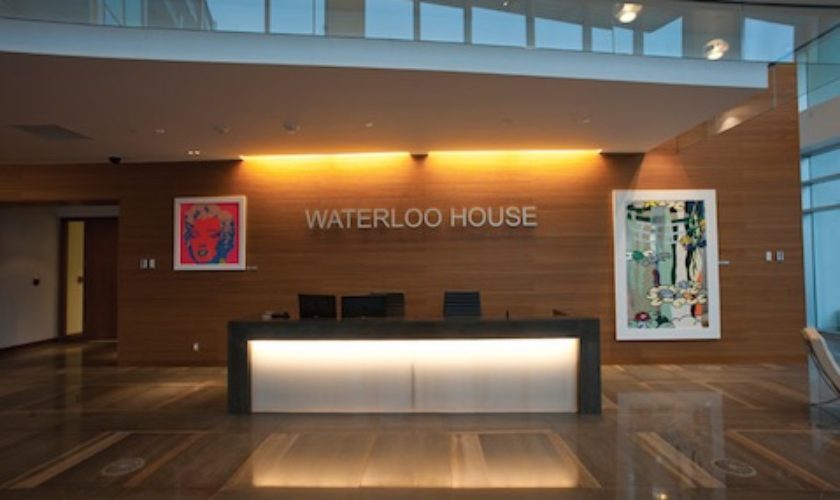 Hamilton’s newest office building is modern and efficient with a nod to traditional Bermudian architecture.

George Bernard Shaw once said, “Progress is impossible without change.” The demolition of a charming old hotel and re-creation of Waterloo House as a Class A office building was a particularly controversial change in the landscape of western Hamilton. While many lament the loss of the historic hotel, progressives know that any investment of this magnitude in Bermuda‚ business sector can only be seen as a welcome sign of optimism in the island’s future economic growth.

The architects responsible for the award-winning design of the new Waterloo House, BotelhoWood Architects‚ have created more than optimism with their 185,000-square-foot commercial/residential building for the Green family. “Our plan was to create a modern office building to meet all the needs of today while retaining many of the qualities of Bermudian architecture‚ and to take full advantage of the spectacular site,” said architect Michael Strohecker. With the aim of designing a building that makes the best use of the available landscape while simultaneously improving the aesthetics of Pitt‚ Bay Road, BotelhoWood earned our judges highest‚ and only‚ praise in the commercial division.

“By the nature of the site and the curve of Pitt’s Bay Road, the building was designed to step back along the street,” said Ted Wood, a partner at BotelhoWood. “This allows the building to unfold as you travel from or to Hamilton, and the courtyard with the sculpture set into a water feature provides a very pleasing addition to this view of the building.”

Entitled Points of View, the 26-foot sculpture by local artist Will Collieson, highlights the entrance to the building with its glossy, white undulating forms representing billowing sails floating atop a serene infinity pool. Custom-made using fibreglass and stainless steel, it was designed to maintain a sense of lightness while being strong enough not to sail away in storms.

“A conscious decision was made to include the Pitt’s Bay sidewalk into the design with increased width and paving that flows into the building courtyard,” added Wood. “Street lights and mature palmetto palms add to the pedestrian experience. This carefully considered design of the entrance perfectly reflects the elegant yet restrained style of the new Waterloo House.”

With four generous floors of office space topped with two floors of luxury residences, and three half-levels of parking underground, the building is substantial in size but maintains that same sense of lightness reflected in the Collieson sculpture. A pitched roof, extensive balconies and full-height windows with shutters help to soften the exterior and recall traditional Bermudian architecture, albeit with more contemporary clean lines. It is immediately apparent that neighbouring Overbay to the east was a design inspiration for the architectural firm.

“The owner of Waterloo House also owns Overbay, the building immediately to the east,” explained Wood. “During design we made a conscious effort to attempt to blend the two buildings. Both buildings share the same colour palette as well as similar details for the handrails with wood cap and the shutters. In addition, during the construction of Waterloo House we renovated the Overbay site along Pitt’s Bay Road to help blend the two sites together as one.”

Their neighbours to the west were given equal consideration in the design. “As Waterloo Lane gives access to high-end commercial and retail activity at WaterFront, the service functions for Waterloo House are carefully concealed behind a sinuous Bermuda-stone-clad wall,” said Wood. “The entire west elevation of Waterloo House is modulated with balconies to ensure there is no connotation of being the back of the building.”

Employees can also enjoy the view alfresco around a paved courtyard area surrounding a preserved poinciana tree that was incorporated into the design and protected during the construction. The significance of the tree‚ which was well-known and appreciated by locals going back to the previous Waterloo Guest House‚ has been highlighted with seating and lighting which allow for casual get-togethers during the day or corporate cocktail parties at night. Restroom facilities and a catering kitchen‚ thoughtfully designed adjacent to the courtyard‚ facilitate more formal functions.

Even the building-code-required fire stairs were carefully finished with custom stainless steel handrails with wood accents and charcoal grey tiles. “In lieu of typical fire stair construction which usually consists of concrete stairs and painted steel handrails, the stairs were thought of as a finished portion of the building,” said Strohecker. By placing the stairs on the building exterior it allowed the stairs to receive ample natural light which is filtered through the green screens outside the glazed walls.

The green screens are a type of vertical landscaping, a first of its kind in Bermuda according to Kevin Horsfield of Horsfield Landscape & Design Ltd. who planted a selection of vines including allamanda, coral vine and honeysuckle that will eventually grow up and down the trellis system and provide shade for the stairwells while reducing energy costs.

As is often the case with large office buildings, some of the most interesting design details are actually hidden from view—Waterloo House being no exception. A first of its kind on this scale for Bermuda, the office areas boast a unique under-floor air distribution system. Strohecker explained: “The under-floor air distribution system utilises floor panels raised 18 inches above the structural concrete floor slab to form a plenum through which conditioned air is distributed through the floor at low pressure. Air flows up through the floor via adjustable diffusers that can be located to give each occupant control over the amount of conditioned air around them. This system has many advantages over traditional HVAC system designs, such as estimated 20 percent saving on ener
gy costs, highly flexible and reconfigurable layout, better acoustics and improved personal comfort with individual air volume control. Also, with the space provided by the use of the access panels it allows electrical and data cabling to be run under-floor in the plenum.”

Many other energy-efficient systems were included as part of the design. Interior lighting is automated, turning on and off based on occupancy and daylight levels. Balconies, particularly those on the south side, provide shade to reduce glare and solar heat gain, while insulation in the roof and exterior walls as well as high-performance low-e glazing on the windows help to reduce cooling costs. In the residential section of the building, solar panels on the roof provide preheated water for each of the seven apartments.

The luxury apartments include five three-bedroom units and two two-bedroom units ranging in size from 2,800 to over 4,200 square feet, including expansive balconies with impressive views overlooking the City of Hamilton, Hamilton Harbour and the Great Sound. Fetching rents from $14,000 to $20,000 per month, the high-tech and spectacularly appointed apartments are finished with Brazilian walnut floors, custom kitchen and bathroom millwork, granite kitchen countertops and porcelain tile in the bathrooms. A gym, lounge and large outdoor terrace, complete with barbeque, were also included for the tenants personal use. For those who may own a boat, the adjacent marina was also renovated to accept new floating docks allowing for seven boat berths to be added.

When they purchased the site in 2009, the Green family, intended to create a Class A office building worthy of the special site and provide a building that compliments and adds to the Hamilton area said Strohecker. And according to Wood, the owners are thus far very pleased with the success of the building.

The Green family have been very supportive through all phases of the project and have been a pleasure to work with. In the course of construction they hosted worker appreciation parties to express their gratitude to the full team of consultants and contractors. They are very pleased with the completed building and encouraged that less than six months after completion of the building both the commercial and residential space is 100 percent leased.

“While the overall success of the project can be credited to all of the contractors and suppliers, we would like to specifically recognise the general contractor, D&J Construction, and the main subcontractors, P&M Electric and Bermuda Air Conditioning, for helping create an on-time and on-budget project,” added Strohecker.

We give all the credit to BotelhoWood for designing a spectacular commercial project worthy of the top award in the commercial division, as well as a beautiful new addition to the Hamilton landscape.