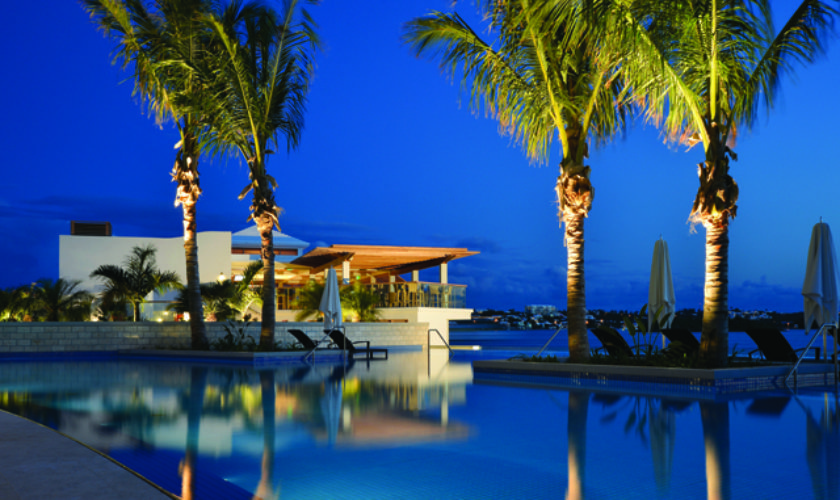 When the Green family proudly purchased the Fairmont Hamilton Princess in September 2012 they immediately set out to revamp the 130-year-old grande dame of Bermuda hotels. While still one of the most beautiful resorts on the island, the old girl was showing her age and some obvious upgrades were desperately needed. Working with almost the entire team at BotelhoWood Architects, the family provided the following mandate: To upgrade the aging hotel as appropriate for a premier international business hotel and to add amenities to expand the successful business appeal to attract resort-oriented guests—a clear yet complex request that was satisfied in spades according to our judges.

“The architectural firm managed to meet expectations at an international level while doing an excellent job of creating a beautiful oasis in the heart of the city,” stated one judge, while another was impressed by how they “perfectly referenced Bermuda, without stripping it out of the design process.”

In Phase 1 of the three-phase project, the architects set out to turn the famous “Pink Palace” from the executive businessperson’s hotel to a full-scale, high-end resort with all the amenities a family would look for—and expect—in an island retreat. The team—including senior architectural technologists Mark Danforth and Gary Ince, architect and partner Ted Wood, architect Michael Strohecker and senior architectural technologist and partner Jason Mackertich—began by completing a major renovation of the three-storey Poinciana Wing, including 33 rooms and 66 suites with minor works to the adjacent Bermudiana Wing. “The Poinciana Wing received a full remodel,” said Danforth. “All the bathrooms were removed and a more modern, clean design was implemented. The one-bedroom suites were modernised throughout, and new extended balconies were added to take advantage of the harbour views. The highlight has been the two new 2-bedroom suites, Deliverance and Patience, located on the southern extremity of the Poinciana Wing which enjoy the full panorama of the harbour.”

Working with incredibly tight deadlines—the firm had only a year to complete the master planning, design and documentation for Phase 1—construction firms D&J Construction, Somers Construction and Correia Construction simultaneously began work in September 2013, with the substantial portion of the job finished by the May 24, 2014, deadline. According to Wood, however, the complex and weather-sensitive marina breakwater was not completed until July 2014.

An essential part of Phase 1 included a new, full-service, 66-berth marina complete with electrical and water services for local and visiting craft and featuring dock master and customs offices, washrooms and showers, and a large dock area for functions. “The marina has floating finger docks for 66 berths, for boats ranging in size from 25 feet to 100 feet,” explained Wood. “In addition, there is a 200-foot-long floating dock, for drop off and pick up, and short term visitors. These floating docks and finger docks are in a marina protected by a breakwater constructed with precast concrete elements and supported on steel and reinforced concrete piles driven through the seabed into solid rock. There is provision for visiting tournament fishing boats and mega yachts to dock, either alongside or stern-to, on the outside of the breakwater. A similarly constructed pier on the east side of the marina caters for local tour craft.”

The complexities of building such a substantial marina involved everything from underwater surveys to coordinating the subtle integration of necessary service facilities. “Integrating fire hydrants, pump-out facilities, dedicated electrical circuits, potable and non-potable water, communications cables and provisions for future fuel dispensing into the breakwater and floating docks took considerable coordination during design and construction,” said Ince. “The challenge was to design and coordinate these services so they are scarcely visible.”

Also of concern was the potential environmental impact that building the marina and the restaurant, 1609, above it would cause to the immediate area, so the firm conducted an underwater survey and produced a comprehensive Environmental Impact Statement. “The seabed was mainly covered in silt and was not conducive to marine life,” said Wood. “The piles and floating docks promote underwater growth and marine life.

“The restaurant and the facilities below it are constructed over a substantial concrete dock, which is supported on precast concrete beams spanning between steel and reinforced concrete piles,” he continued. “This method of construction avoided large quantities of backfill and, as with the breakwaters, the piles and covered sea surface promote underwater life.” What once was rather grey-green and barren waterfront is now teaming with fish and other sea creatures seeking refuge under the floating dock—and no doubt enjoying a crust of bread or two from families dining at the restaurant above.

Originally envisioned as a casual poolside bar and grill, 1609 evolved during the design process into the uber-popular restaurant it has already become. Syrian stone floors, white walls and pale Spanish cedar used on the glazed shutters and boarded ceiling work seamlessly to give a light and airy feel to the restaurant and add to the illusion of floating on the water while dining or sipping a cocktail. Combined with the spectacular views over the harbour and gorgeous sunsets, it is no surprise that 1609 would so quickly become such a hot spot for guests and locals alike.

Early in the design process it was apparent that the unique location would make it very popular, and 1609 evolved as a restaurant with bar,” said Strohecker explaining the firm’s design considerations. “Maximum waterside perimeter is given to dining with the bar as a central focus. The colour pallet is deliberately low key to let the ‘Bermuda views’ speak for themselves. In Phase 2 there will be a large and dramatic restaurant, so 1609 was designed to feel as casual and outdoors as possible.”

Adjacent to 1609 is the spectacular new 4,800-square-foot combination resort/family pool. Featuring a dramatic infinity edge and deep, ocean-blue glass tiles, the pool was designed to blend in with the harbour beyond. Separated by a unique shallow central area featuring lounge chairs and even bar service, the pool has two distinct zones including a general bathing area on the inland side and a deep swimming and standing zone closer to the harbour. There is also a special shallow play area with fun water jets for young children and a separate hot tub. “The pool is well used and thoroughly enjoyed,” said Mackertich. “It has transformed a former little-used triangular space into a centre of activity and [has become] a great visual and physical amenity.”

Improving the connection between the hotel and its spectacular harbour view was a major consideration in the renovations. Before the design process began, the team at BotelhoWood surveyed the hotel observing how the guests moved about and interacted with the environment. Two things became immediately apparent—the guests did not flow through the hotel efficiently and the waterfront walkway was one of the most used and appreciated parts of the hotel. The firm immediately set out to improve the connections between the hotel wings and the main lobby area and made the waterfront walkway and overall harbour views a priority in the design.

“Maintaining a full waterfront walkway was essential,” said Mackertich. “As purchased, the hotel did not take full advantage of the water frontage and harbour views.

“We have placed 1609 over the water and provided large dock areas for other waterside activities,” he continued. “There are now paved areas with glass balustrades along the seawalls. The pool and lounging areas are elevated slightly to give views out over the harbour. Solid walls at the end of the Poinciana Wing have been opened up with balconies, glass and sliding doors to create spectacular suites. These gestures have been very successful having changed the character of the rooms and outdoor areas, and will continue through Phase 2.” The Green family has been very involved in the design and construction phases of the project; they are very pleased with the outcome thus far and have showed their appreciation to all involved,” said Wood. “The owners have been very supportive and appreciative of the consultants and contractors. They held ‘worker appreciation’ parties as work on site progressed, and they have expressed great satisfaction with the outcome. This enthusiasm and team building continues through Phase 2 construction and Phase 3 design.”

With Phase 2 expected to be finished later this year, we are looking forward to the continued transformation of the old grande dame into the modern and sophisticated resort hotel she deserves to become. As one judge succinctly stated, “This high-end renovation is proving that Bermuda is on the right path to becoming a viable resort destination.”