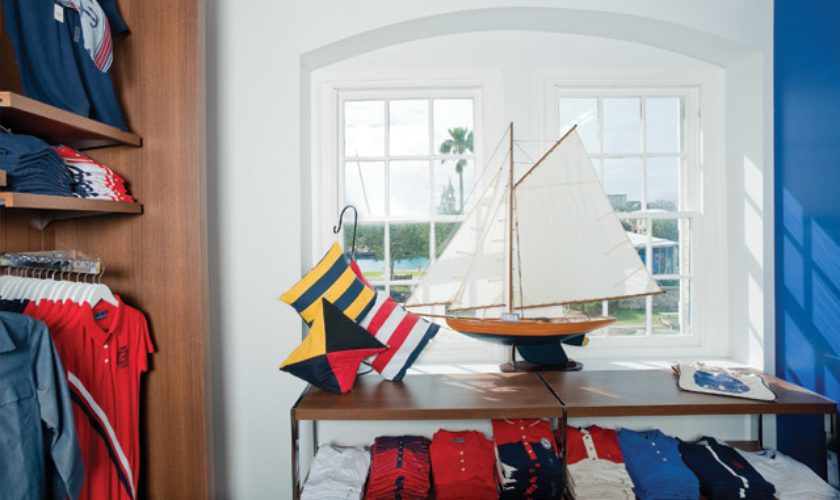 Nautical history, classic design and a new Bermudian clothing label perfectly blend together in Crown & Anchor’s flagship store in the Royal Naval Dockyard. Owned by Laura and William Pitt and renovated by David Benevides at Benevides and Associates, the 1900-square-foot retail store officially opened in September 2015 after a mere five months’ renovation.

“We had been working on the concept of Crown & Anchor, a classic Bermudian clothing label, for some time, and knew that the flagship store needed to encompass the brand’s reflection of Bermuda’s unique nautical history and British ties,” said Laura Pitt. “With this focus it was apparent that the Royal Naval Dockyard would be the most obvious locale.”

Originally a sea captain’s residence, the building had been shuttered for several years without use, and the interior was terribly dilapidated; it was less than ideal, to say the least, for a retail store. “The space had been uninhabited for a considerable period of time, and was in such a state of disrepair that it was apparent that we would have to strip it down to the bare bones,” she continued. “The building had originally been a sea captain’s residence so was divided into small rooms with a central staircase just within the front door. It was totally unusable for retail.”

Seeing past the damage to the bare-bones beauty of the building, the owners had an inspection of the structure completed and decided to go ahead with the lease. “At the time of the inspection there was only a small roof access,” said Benevides. “We knew that there was a roof truss system in the attic but we could not confirm the full extent and if there was any damage to the structure that would need to be repaired. When the contractor removed the ceiling in the upper floor, it was confirmed that the truss system could be exposed with some repair work and a lot of sanding and painting.”

What resulted was a stunning ceiling with exposed beams which served to open up the space, leaving it bright and airy. “We envisioned a very bright and open space, where the history of the building was apparent,” said Laura. “However, we also needed a functioning retail environment, which meant tackling issues such as storage, bathrooms, fitting rooms and getting people upstairs, while optimising floor space. Benevides successfully addressed and overcame all the hurdles and worked seamlessly with Bev Moroz of Factory Design Worx Inc to ensure that the retail fixtures worked within the space.”

With form following function in this project, the design of the space included custom retail fixtures with rounded corners in bright whites, deep ocean blues and warm wood finishes. Solid brass marine light fixtures from ESC add an air of authenticity to the nautical atmosphere. And in keeping with the British influence, dark wood flooring was chosen to add contrast to the bright white walls and ceiling. “The operators worked with Souza Carpets & Flooring and decided on a porcelain wood tile for the ground floor and an engineered wood for the upper floor,” explained Benevides.

Along with all the interior work, the architect added a touch more nautical history to the exterior by commissioning new shutters painted bright white to highlight the beauty of the building. Built by Strike Force Carpentry, the board and batten shutter style is consistent with other shutters in the Dockyard area. “The project works perfectly within the context of the Royal Naval Dockyard,” the architect said when asked what he was most proud of. “This is an historic building that has been lovingly renovated into a modern retail store with a well-designed retail product.”

“We are absolutely thrilled with the results,” added Laura. “The renovations have created a modern functioning retail space while maintaining the historic integrity of the building.”
Our judges agreed. “I thought they did a great job of keeping the feel of the original building but updating it for what works now,” said one. “It is such a beautiful space with minimal colours—the woods, the white and the blue. It embodies the nautical theme without going over the top.”

The judges also appreciated the time the designer took to reclaim the nautical history of the building. “It’s a beautiful renovation that can hopefully inspire other people around there to do similar projects,” another judge commented.

“The feedback has been amazing; both locals and tourists have embraced the brand and what it represents,” Laura concluded. “The flagship store with it’s exposed rafters, oversized windows and gallery entrance has helped to create a unique retail environment that reflects modern Bermuda while celebrating our history.”