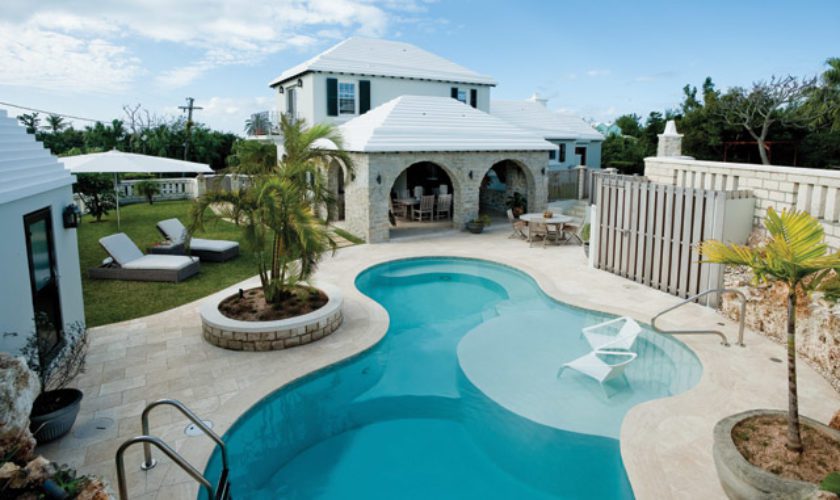 From Basic to Beautiful: Seashell

Sometimes it only takes a small change to completely transform the ordinary into the extraordinary. And when done with precise attention to detail, quality workmanship and a whole lot of love, a simple backyard renovation becomes award-worthy. Such is the case for Seashell, a lovely family home in Hamilton Parish whose owners added on a relatively modest but well-designed pool and patio and turned a largely unused backyard into a perfect retreat for relaxation and entertaining. “We have quite a lot of property, but there was never any proper landscaping done and it was boring,” said the owners, who wished to remain anonymous.

“I have always wanted a pool,” one of the owners admitted.  “We were visiting friends at their home in Costa Rica, sitting around their pool and [my husband] happened to say ‘This pool would be a good size for us’—and that was all I needed to hear!”

“We knew we wanted a small pool,” she added, “but one that was interesting.” The homeowners then spent time researching their design ideas in magazines and online before hiring architectural designer Malcolm Wilson to turn their vision into reality. The couple decided on a three-circle design: a “beach circle” in the centre which is a mere six inches deep to accommodate lounge chairs; a “wine bar” circle which is four-foot deep with a bench all around for sitting while sipping; and a six-foot deep circle at the other end for swimming or simply treading water.

Digging a hole six feet deep is generally not that big of a challenge for most contractors, but excavating through the hard rock and crystal that Hamilton Parish is well known for was no easy task. “The biggest challenge we faced was the excavation,” the owners said. “Hamilton Parish is known for its hard rock and we can certainly attest to that! Island Construction had a big job getting through the rock and much, much crystal. They actually said that a job this size should have taken them three days to complete—and it took them three weeks!”

Rather than sending the rather beautiful chunks of crystal to the dump, the owners chose to make use of them in the waterfall and planters on the back wall of the main pool area where the limestone rock they had cut into was also left exposed. “By leaving the natural elements of stone and crystal, we have a reminder of the beauty that Bermuda is built on,” they said.

Along with the natural stone unearthed in the excavation, the couple also discovered a bit of local history to adorn the pool area. “One cool feature of the pool is the mermaid (Ariel) and merman (Neptune) statues,” said the owners. “These were purchased at an auction and we were told they came from the original Castle Harbour Hotel. Love that bit of history!”

With a desire for a neutral palette, the couple turned to Pembroke Tile and Stone for the pool tile (“They had just what we had in mind.”), but they needed something special for the stones that surround the walls of the porch. “Our vision for the porch was a little different—we wanted the stone and searched online until we found a supplier in Wisconsin,” they explained. Set carefully into three arches containing the outdoor covered dining area, the stone facing lends a dramatic, yet homey feel to the space. “Our outdoor porch is a new living area for us. It is cozy, but airy and very welcoming.”

Along with the pool and covered patio, the owners added on a barbeque area for entertaining and a traditional Bermuda buttery to house all the necessary pool equipment. Despite the excavation challenges in the beginning, the project moved along quickly—work began in January 2015 and the owners were enjoying their new pool and patio area by June.

The judges were very impressed by the overall functionality and appeal of the project along with the quality of workmanship throughout. “They took a yard that was essentially useless to them and turned it into a space where they can spend all of their time, making it a highly successful project,” said one of the judges. “The pride the owners took in the project was really something to take note of,” said another.

From unused backyard to a highly functional, and absolutely beautiful, new living area, Seashell’s renovation was hugely successful for all involved—especially for the owners who are just thrilled with their new space. “We love that we have created our own ‘resort,’ Bermuda style,” they concluded.