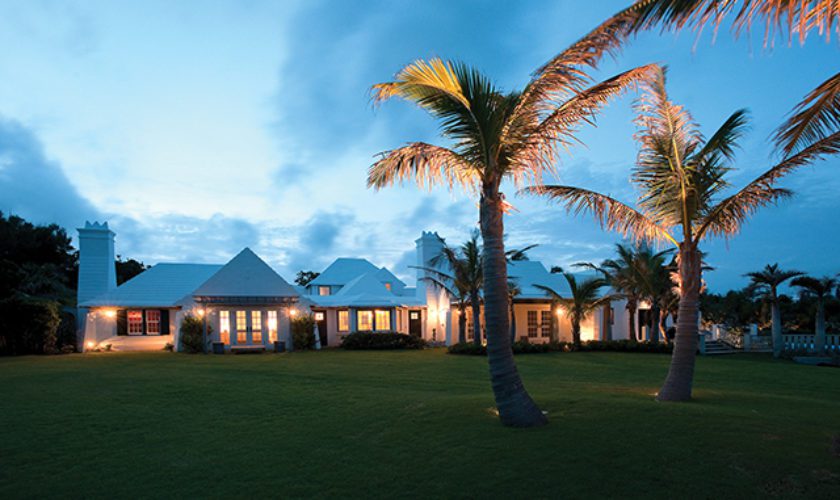 “The mandate for the design was to provide a feeling of history and classic Bermudian cottage design—soft and worn-out/freshened-up,” said the owner, a mother of five boys and grandmother to several grandchildren. “[We wanted it to look like] an old Bermudian cottage that we found abandoned and fixed up, spliced with a touch of modern (in the kitchen), but really just simple and plain, and then, most importantly, whimsy dotted all around.”

Designed around a central courtyard, the home slowly reveals itself as visitors meander from one carefully laid out room to the next. With such a spectacular view to work with, a natural inclination would be to build a house with access to it from every room, but Jacob Hocking at cTx would have to go against that instinct and instead be far more creative with his design.

“The clients wanted to resist the temptation to wow visitors with the spectacular view immediately upon entering the house and chose to slowly reveal the overland and ocean views as visitors walk around the courtyard hallways,” said Hocking. “Experiencing the house, and the site for that matter, is more of a journey—different areas and viewpoints expose themselves as you walk around the property.”

The organising element of the courtyard added to the success of the project, stated the judges. “It is a meandering home yet it has such a good rhythm to it,” said one judge, while another commented on how the courtyard “worked so well to allow light into the interiors”. “The attention to detail is incredible,” cited another judge.

To create a sense of history within a new construction, without it appearing as if it was created by Disney-like builders, took an exceptional amount of consideration from the initial design concepts to the final plastering.

“We approached the design of the house as if it had evolved over time,” explained Hocking. “We designed the original cottage, then added bedrooms, etc., much as if the home had evolved naturally. We covered larger rooms with steep gabled roofs and then connected them with lower, flatter roofs so that you could see between the structures and they read as individual forms, not one large mass. We also moved away from a traditional approach in architecture where a house has a front, a back and two sides to try and create a house with four fronts. This means the building is more square than rectangular which masks the true mass of a large house well.”

In the construction phase, Hocking joked that they had the masons mixing the concrete and the labourers doing the plastering with broken tools to avoid the natural desire to create the perfect lines of a new house. “We took painstaking steps to grind the roofs and distress the plastering so that it had the look of a house that had been there for some time,” said Hocking. “We softened the weathers on the roof by hand, built false sags and repaired nonexistent cracks to age the roof. On the plastering, we restricted the tools that the masons could use so that corners were rounded, edges were softer and walls were straight, but not flat. This was all done whilst being careful that windows, doors, baseboards and cabinets would all fit without large gaps.”

A secret room can only be accessed if you know which book opens the hidden door.

Truthfully, Hocking says the team at SJ Construction deserves significant praise for going to the lengths that they did to build such an impressive house.

“Making the house look old required a craftsman approach by the contractor. We practised how to do this without making it look like Disney world and ultimately ended up building the critical elements in exactly the same manner and with the same tools as they would have been built originally.”

Other carefully considered details in the design included using wooden joists over the concrete slabs so that the unfinished oak floors would be “hollow and creak as you walk over them. This method gave not only authentic-feeling wooden floors but the structural strength and longevity of the concrete slabs,” said Hocking.

The landscape design was equally well considered. Meandering pathways
lead to lovely courtyards for the whole family to enjoy exploring.

The owners were determined to have a single-floor home, but the designer insisted some elevation was needed. “Jacob believed the house needed a little lift in the overall composition, but we were stuck on having only one floor,” said the owner. “He was absolutely right, and it contributes a great deal to the whole architectural design. At one point I wanted a spiral staircase going down from the crow’s nest into the interior courtyard, but we opted for a tiny balcony instead.”

The crow’s nest was built a half-storey higher than the main house and was designed to be a secret getaway for the grandchildren. “My husband and I raised five boys and our youngest always wanted a secret room behind a panel or bookcase,” said the owner, who was passionate about adding a sense of whimsy in the design. “When the architect suggested a hidden door within a bookcase, we jumped on it, and the idea lent itself to lead to the crow’s nest.”

Another secret hideaway was created above the garage. Designed to nestle into the hillside, it was conceived as stables with a hay loft, said Hocking. “The loft is an additional guest suite with private garden seating areas that is accessed through a vegetation tunnel. It feels secret and private,” he added.

Searose is designed around a central tiled courtyard.

Outside, the concept of the lands
cape design was equally well-considered to give the home an authentic sense of history as well as an enjoyable environment for the family to explore and experience. “Landscaping was critical to this project in order to make the house look like it had been there for a long time,” said Hocking. “Bob Duffy worked with us tirelessly to select plants that would grow in the exposed area yet achieve the country garden look that [the owners] desired. The meandering pathways, secret rock-cut stairs, lookout seating areas and vegetation tunnels all come together to make walking around the site a fun experience for [the owners] and their grandchildren.”

Now, after three years from initial concepts to completion, the designer says that Searose is one of his favourite homes of those the company has created to date and had difficulty deciding which part of the design was his favourite. “I like it all,” he said. “It is certainly one of my favourite homes that we have designed. It feels lived in and like it has been there for generations. I like that it looks smaller than it is and fits into the site rather than sits on top of it. I am happy that it reveals itself slowly to you and is a humble addition to the site.”

As with all projects of this scale, challenges are to be expected. But Hocking’s main one was actually within himself. “The biggest challenge was accepting that some of the client’s ideas were better than my own,” he stated, humbly. “[The owners] would often propose things that I was initially uncomfortable with but we would develop the ideas together and end up with a final product that exceeded both of our expectations. This project has changed the way that I approach client ideas in our current designs.

“As with all projects, this house had its ups and downs,” Hocking continued. “Both [of the owners] remained steadfast in their desire to design a Bermudian home in Bermuda, not a summer house, and working with clients who care so much about what we are creating is always fun. Our whole design team has become friends with them as a result of this project. This is testament to the patience, hard work and understanding that we all shared as a group in executing this design.”

And that highly successful execution of this complex and creatively designed masterpiece of a house is exactly what earned cTx Design Group this award.