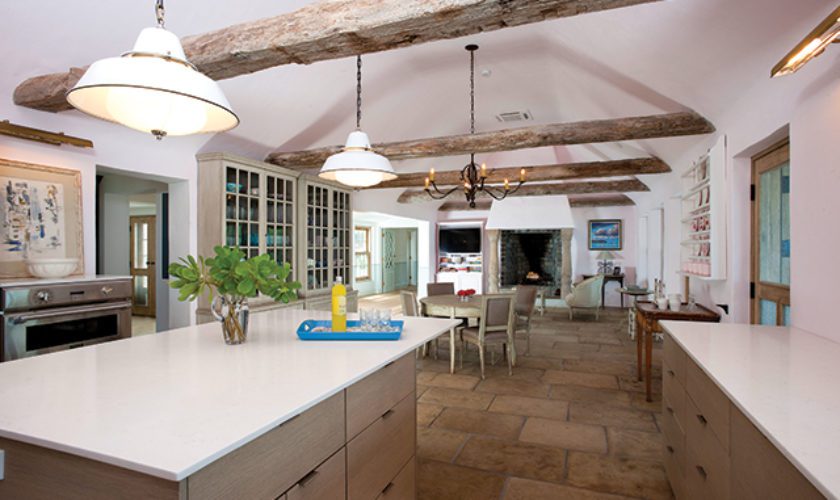 It is a rare thing when the perfect team seamlessly joins forces to create a home designed to fulfill the unique vision of a highly creative client through the exceptional detailing provided by those contracted to do so. Searose, a six-bedroom, six-and-a-half-bathroom family home was just such an exception. The overall building design concept was to create a new home with the feel of an historic, old Bermuda cottage (click here for more on the winning building design aspect), and the interiors had to reflect the same.

The owners—a mature, highly-energetic couple with five adult sons and numerous grandchildren—had already engaged the help of cTx Design Group on the architectural side of their home when they began to talk of their numerous interior design concepts with designer Lauren Grayston.

A cedar-lined study was designed exclusively for the husband.

“[The owners] were wonderful to work with and through this journey have become like family,” said Grayston. “[The wife] is a true artist so working with her was always exciting. You never knew what was coming, but you knew it would always be good.

“On a Monday morning I’d check my emails and find pictures of [the husband] propping up a ‘pair’ of pillars covered in mud, different heights and colours and a note from [the wife] saying ‘I’ve found the kitchen fireplace pillars!’ Months later, after we figured out how to have the treasures trucked (sometimes, it seemed, by cart horse) from these obscure locations, we’d huddle around them and figure out how to install them. Turning them around, upside down and a little to the left—no, right—and obsess until they were in place.”

Each guest room was designed to be completely unique. This one features painted wood floors.

Grayston remarked that the owners seemed to find inspiration everywhere, but most frequently referenced a great book called The Swedish Room by Lars Sjoberg. “She loved the soft palette of blues, greys and whites and nostalgic images which contrasted the rough-hewn furniture against neoclassical backdrops.”

The design team considered each area of the home individually and it evolved over time. And the rules simply did not apply. “[The owners] wanted the house to feel like it had been standing for generations and was filled with clues about the history of the people who lived there. Nothing was to feel ‘new’ or modern—recessed ceiling lights, considered essential to most new builds, were banned; walls were purposely plastered unevenly; at a random point in the new kitchen there is joint running across the floor where the large concrete tiles of the sitting room meet the kitchen’s ¾ inch by ¾ inch white marble mosaic because this was where ‘they had added on the kitchen’ and it was done in a time where they wouldn’t have worried about the floors matching!”

With everything in the design needing to look aged, considerable care and attention was paid to the details—from weathering oversized ceiling beams by leaving them outside in the elements for six months before installation to the careful consideration of placement for the numerous salvage items—both from overseas and their own backyard—that the couple discovered during the construction process.

“I love junk yards and salvage/wrecking yards and came across the mismatching cement pillars to hold up the fireplace in the kitchen,” said the wife. “Because they’re carved, they soften the massive fireplace that’s lined with old cobble stones.

“Under the island overhang in the kitchen I wanted something whimsical as a pedestal… I thought of the idea of a branched crotch of a tree. So patiently, Mr. Hocking helped me cut down a good-looking part of a casuarina tree on our property.”

“The puzzled look from the countertop installer was an expected response by that point in the project,” added Grayston.

The branched crotch of a casurina tree is used as a pedestal for the island overhang in the kitchen.

Other salvaged elements included a pair of round wooden columns with greyed, cracked paint that were used to help give an illusion of privacy between the hallway and the formal living room; and textiles used in the crow’s nest bedroom were discovered at a flea market.With a passion for creating her own rules, the wife added unique elements to the design in every room of the house. A grey and white hand-painted checkerboard floor is a highlight in one guest bedroom, while hand-made, fish-scale tiles by Tabarka randomly finished around the sink in the powder room is a standout. And nearly every room in the house features its own unique fireplace—some oversized and grand like the one in the main living/kitchen space and others a little less successful but nonetheless perfect for this unique house. “I had seen an old Swedish fireplace and tried to replicate it with stone,” said the wife. “It totally backfired and ended up looking like a cartoon! It makes everyone laugh when they walk in.”

“With five sons, wives, five grandchildren and more on the way, the house is intended to be a place for the entire family, and the design of each space was considered with the same desire to create something special,” said Grayston. “It was a once-in-a-lifetime kind of project. [The owners were] both fun-loving, creative, warm and caring rebels to work with. Who wouldn’t like that?”

The sink in the powder room features hand-made fish scale tiles by Tabarka.