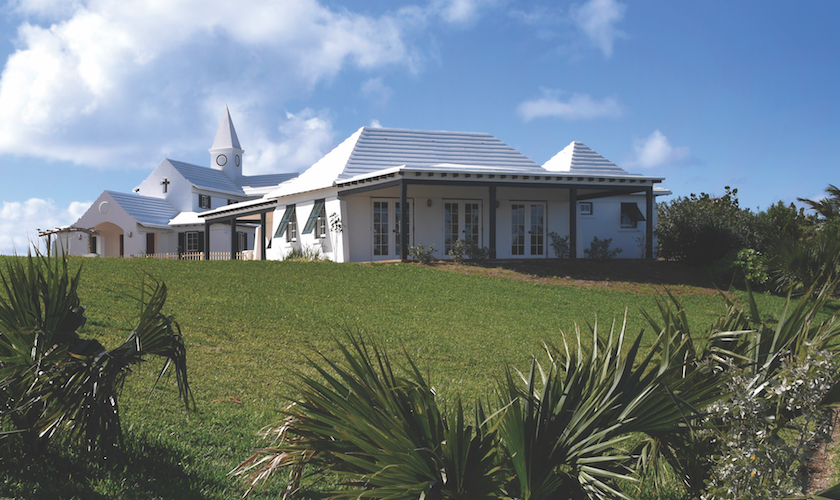 Unwavering faith, passion, commitment and months of dedicated research—all before a single block was laid—have resulted in an award-worthy project for architect Harold Conyers and his clients. Located just east of the new marina at Caroline Bay, The Chapel Hamlet features a non-denominational chapel flanked by a fellowship hall and a parsonage along with public bathrooms and a storage building, all surrounding a circular driveway highlighted by a life-sized bronze sculpture of children, aptly entitled Joy.

Adjacent to these buildings lies the outdoor worship space featuring an altar made from hand-cut Walsingham limestone with simple concrete benches. This open-air alter stands in exactly the same place as the original altar in the derelict church that was found on the site.

“The original space on the base was designed and built by the US Navy in a style typical of US military bases,” explained Conyers. “It was used for both Catholic and Protestant services, with offices for the Catholic and Protestant chaplains on opposite sides of the altar area. The original building probably could seat about 150 people. Although it functioned as a place of worship until about the time that the base closed, it remained open and was used by locals as a place of prayer and solace as late as the turn of this century.

“We found the building in a state of neglect and disrespect, stripped of the pews, altar, windows, Bibles and hymnals. The crosses were toppled, trees growing up through holes in the roof, doors gone but walls still stand ing. It was eventually demolished during the remediation period.

“The site offered the opportunity to restore honour, dignity and respect to God while rescuing and resurrecting a forgotten, desecrated and ultimately abandoned place of worship which had served as a holy place of comfort and solace to so many during the war years and beyond.”

The pre-design and site review began in September of 2014. For the next four months, Conyers travelled end-to-end visiting local places of worship and gathering ideas and inspiration for The Chapel Hamlet.

“From September through December 2014, I spent many hours visiting, photographing and sketching churches, chapels and other places of worship from east to west,” he said. “It was an adventure of sorts, searching for context, shape and form, juxtaposition between elements on church grounds, lateral and vertical scale, fenestration styles, wall/window/door/frame and roof textures, symmetry and asymmetry, light direction, colour, shade, shadow, planting and contouring.

“This large and varied palette spanning 400 years of Bermudian ecclesiastical architecture was necessary to collect for completeness of opportunity to first be appreciated, then understood and then sampled and applied to ultimately craft the built result.”

While the chapel is intended for moments of quiet contemplation or worship and traditional services such as weddings and christenings, the space is also capable of accommodating other gatherings such as readings, recitals, theatre and more for up to 150 people. It features a cruciform base plan, exposed rafters, French limestone flooring and clear-finished Bermuda cedar doors and frames.

“The Trinity inspired the roof design,” stated Conyers. “The three different levels and slopes of the roofs allowed for an expression of framework that just had to be taken advantage of by way of exposing the rafters. The radial framing of the altar roof is both a powerful visual beginning and end depending on which point you view it from.”

Ideal for a place of worship, stained-glass windows finish the space. “The clerestory east and west stained-glass cruciforms are a flowing abstract design in Bermuda colours,” said Conyers. “They say something different to each individual. The north and south facing cruciforms, however, have a net design and are based on Jesus’ statement to the disciples that from that point forward they would become fishers of men. (Matthew 4:18-20, and is the calling of His first disciples.)

“The intent of the artist is that as people experience the chapel, they may also be inspired by these same words. The ten-square clerestory stained-glass windows have been designed in an abstract way but will hold a special surprise for the viewer. The stained-glass windows behind the altar give a nod to Bermuda’s island location amidst the waves of the sea.”

While the chapel is the jewel in this project’s crown, the supporting buildings are equally both beautiful and functional in their design. To the north is the fellowship hall—a single-storey, double-verandah, residential-style building with an above-grade domed water tank—intended for functions such as receptions, education, arts and crafts, meetings and special events, as well as food and beverage service.

To the south is the parsonage—a single-storey, high-ceilinged farmhouse-style building with a fireplace, small kitchen and ADA-compliant washroom designed for use by the relevant officiator to plan and programme upcoming events. To the east of the parsonage are a buttery-style public bathroom and a stable-style, sloped-roof building intended for storage. All of these are based around a circular brick driveway with a sculpture by artist Zachary Oxman in the centre. According to Conyers, the bronze life-sized sculpture entitled Joy consists of seven figures of children aged from a toddler to adolescents enjoying one another’s company. Several of the children hold Bermuda kites (the coloured panel made with stained glass) and other symbolic nods to Bermudian life.

“We wanted the buildings and grounds to be cohesive in both form and usage and for them to broadcast a sense of peace and spiritual relevance at a human scale in a familiar Bermudian aesthetic,” explained Conyers. “We wanted it to feel like ‘a found place.’”

Along with the careful consideration of the building design, the landscaping also played a major part in giving the space the authenticity desired by the client—a major feat for the architect. “The site was a flat military base in the process of decay and demolition—a wasteland with zero planting and zero contouring,” he said. “Specifically, the structure that had stood had been desecrated through abandonment and ultimately demolition, so mission one was to re-establish this as hallowed ground by building the outdoor worship space (its altar is in the exact spot of the altar of the previous structure).

“To enable this, the 2.55-acre site had to be master-planned such that phased development, starting with the new contouring and ‘head start’ planting, could occur using multiple resources concurrently. The intent of the exercise was to sculpt the land using imported (local) fill and soil to re-create a sense of original topography. This reshaped landscape would serve as the foundation for the outdoor worship space and the five structures.”

The end result of this three-year labour of love is a project our judges stated they appreciated for many reasons, including its “juxtaposition of forms,” the “traditional Bermuda feel” and the “terrific landscaping.”

“I like the ethos of it, and I like what it does to the property,” stated one judge, while another noted, “I liked how it nestles down into the landscape which envelops it.”

“To me, it is timeless,” added another. “I was impressed. There are lots of very thoughtful nuances, and the scale is lovely.”

Conyers concluded by saying that it was his longstanding, collaborative relationship with his clients that is to be commended for the success of this project. “The client suggested that the project be thought of differently and be designed and built according to a verse from Paul’s letter to the Colossians: ‘Whatever you do, work heartily, as for the Lord and not for men’ (Colossians 3:23:24),” he said.

“It was one of the easier and more smooth-flowing projects of my career. I put that down to the depth of experience held by every stakeholder and their belief in the specialness of the project. There seemed to be a real passion to get this one ‘right.’”