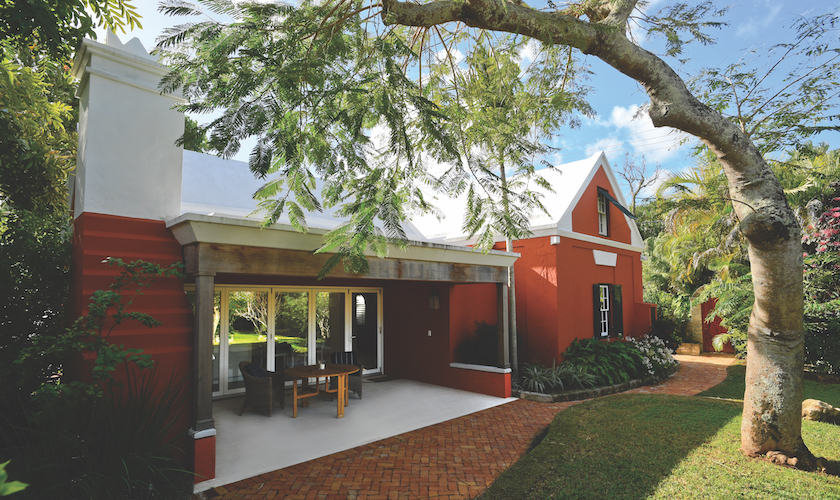 “Renovations were well overdue, and the intent was to change the character of the accommodation from small and enclosed to open and bright. Our immediate response was to embrace the previous quirky changes and create an addition that would be a little eccentric but respectful to the original as well.”

The historical details of the former church are somewhat unknown, but Wood believes it is a nineteenth-century building that was used as a local community church referred to as Gospel Hall. The original building is approximately 540 square feet with a later loft addition adding a further 260 square feet. The privately owned land had changed hands over the years with the hall being used as an ancillary building or cottage for the main house on the property located on the corner of Manse Road and Middle Road in Paget. The building is in a trust and listed as Grade 3—the least restrictive of the listings—and it is recognised that over the years there have been a number of changes and additions resulting in the rather quirky cottage it has become.

“A large part of the charm of Gospel Hall is the unashamed admission that changes have been made,” said Wood. “For example, the eyebrows for the original tall windows were left well above more recent lower windows that fit beneath an introduced mezzanine/loft floor. This loft gave valuable space when the hall was converted to residential use.”

While the exterior of Gospel Hall had been well maintained, the interiors were dark, and damp and the porch structure was deteriorating. “When we moved to Paget in early 2004 the cottage was rented and remained so for another ten years,” explained the client. “As time went by and various repairs were done we knew the cottage was in need of a complete overhaul—the fuses were still the glass screw-in ones. The spaces needed to be reconfigured; it was dark, damp and the existing porch had a leaky roof and skylight.”

To create a more livable, contemporary interior the space was gutted back to load-bearing walls save for the loft area. As Wood explains: “In addition to removal of the previous porch and pump room addition, windows and shutters were replaced, and a new enclosure for incoming services and the electrical metre was added. Internally, the ‘hall’ was gutted except for the loft and the wall supporting it. The miniature steps up to the loft were replaced with comfortable new stairs that span between the new and old structures. The bathroom was completely redesigned and fitted out to suit a longish narrow space, the existing kitchen removed and the space allocated for storage and the new stair up to the loft.”

The main addition to the renovation was a brand-new bright and airy kitchen/dining area which added 470 square feet to the cottage. While a relatively small space, the expansive ceiling height with exposed roof framing, large glass doorway leading to an open but covered porch and fixed, double-glazed clerestory windows high above the kitchen cabinets give the illusion of a much larger room.

“We quickly realised that if the kitchen was in the addition, there was the opportunity to make it large, contemporary and accessible to indoor and outdoor dining and entertainment,” said Wood. “Due to the desire for high walls and no low-level openings on the east and south walls, there was ample wall space for appliances and storage. This allowed us to have a simple planar island for minimal separation of cooking and eating activities.

“The kitchen and dining zones both open directly to the patio when the 16-foot-wide multi-fold glass doors are open. This unobstructed flow from indoors to the patio and the landscaping beyond is the single most spectacular feature of the design.”

“It was important for the addition to seamlessly and sympathetically marry the existing old Gospel Hall which is a Grade 3 listed building,” said the client. “We wanted to respect the existing building’s architecture and past but at the same time make the whole functional for modern living and infuse lots of light into what was a dark, damp corner.”

In order to do just that, Botelho Wood and interior designer Christine Benn worked together to maximise the small spaces using minimalist style concepts. “The bathroom is a long narrow space but is laid out in a bright, minimalist and functional style,” explained Wood. “The bedroom is a small but uncluttered sleeping space with a walk-in closet inconspicuously added as a visual break between the old structure and new patio. The existing ceilings and exposed roof framing were all painted white and discrete LED up-lighting introduced to brighten the living area. The added kitchen/dining area is, of course, the major contribution to contemporary lifestyle.

“From day one there was the notion of lofty all-white spaces, and this jived well with the original proportions of Gospel Hall.

“Finding a comfortable and happy fit between new and old is always a fun challenge,” concluded Wood, who also credited the vision of the owners and the joint effort of the team to the project’s success. “It is collaboration and personal commitment that make this project a success in terms of built result and personal satisfaction.”

Knowing Wood personally after having already worked on a project with him for the main house, the clients were thrilled to work with him on this renovation, which in the end became a team effort. “He is such a gentleman, and we like his approach to design and his ability to incorporate contemporary design concepts while respecting the simplicity and proportions of Bermuda’s traditional architecture,” they said. “We worked with Ted on the new layout and the addition; then he brought in Kevin Simmons, a young Bermudian currently working overseas, to be involved in the project also. When Kevin went back to university, Mark Danforth took over and ably provided the day-to-day support and project management.”

And how happy are they with the final result? “We are thrilled!” said the clients. “It turned out better than we imagined it could and, we would happily move in tomorrow.”