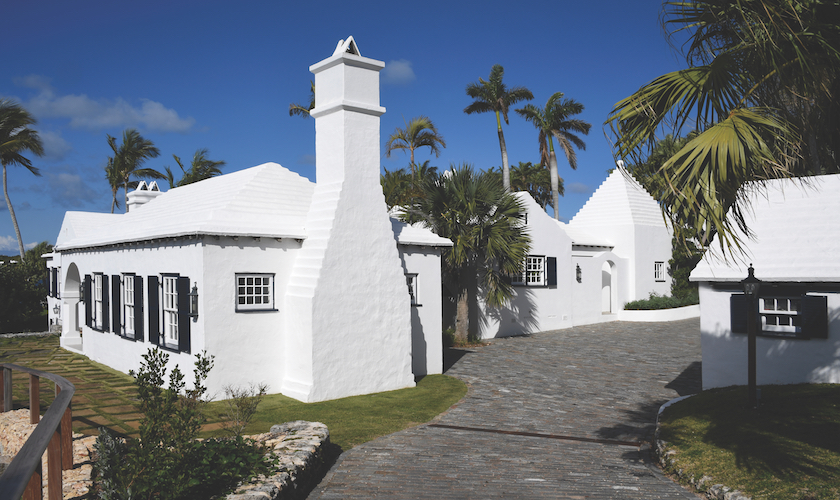 Coral Ledge is lovingly restored to its former glory with sympathetic yet contemporary design elements, ideal for a casual family lifestyle.

The saying “Beauty is in the eye of the beholder” is certainly apropos in the case of Residential Building Design Award winner Coral Ledge. When the owners—a professional couple with two school-aged children—first came upon the property overlooking Harrington Sound it had been shuttered for two decades and was referred to as “ruinous.”

“It was very dilapidated,” they said. “If you shut up a house by the water for two decades you can imagine how bad things were. Two building firms and a surveyor referred to it as ruinous. All that being said, it was a beautifully designed home that had been constructed properly. Despite the detritus, its character came through in abundance.”

Regarding the history of the house, cTx owner Jacob Hocking explained: “Coral Ledge was conceived in 1929 for Mr H. Bernard L. Wilkinson and his wife Josephine Wilkinson (neé Dodge). Its design was a collaboration between the renowned Scottish architect Lawrence Smart and Mrs Wilkinson. It is also accepted that some of the drafting on the house was carried out by Wil Onions, who was employed by Mr. Smart following Onions’s recent return to Bermuda. Coral Ledge is an early example of the revivalist Bermudian vernacular style that came to define the island’s architecture and was typical of both Smart’s and Onions’ work.

“Coral Ledge subsequently became the home of Mr and Mrs Wilkinson’s daughter, Josephine Diana Wilkinson-Gould. The house has been uninhabited for the last 25 years and was purchased by the current owners from the Wilkinson Estate sometime following the passing of Mrs Wilkinson-Gould.”

By the time the property was purchased, many of the unique architectural features such as the fireplaces, bannisters and some cedar floors were salvageable, but the majority of the house was in dire need of a full update and restoration.

“As far as we were concerned it was the most charming, intriguing and welcoming Bermuda house we’d seen—all despite the terrible state it was in,” said the owners. “We knew it would make a perfect home for our family. We were compelled to bring it back to its former glory, imprinting elements of design that would be sympathetic and practical while at the same time interesting and a little edgy.”

The renovations began with stripping the existing building back to its stone walls and rebuilding, using as many of the original finish materials as possible, said Hocking. “All structural members were checked, restored or replaced depending on their condition,” he explained. “The roof framing was thoroughly inspected, repaired (there had been fire damage in the past) and insulated. We pulled apart the original wind-out casement windows and repaired the mechanisms—anything that was better restored than replaced, was repaired throughout.”

Along with the renovations to the existing structure, cTx also designed two major additions to the home: a wide covered terrace at the back of the house overlooking a new pool and a covered carport allowing the family access into their new kitchen. A pump room and pool bathroom were built beyond that space. An en-suite bathroom was also added to the third bedroom by extending the wing of the house by nine feet and replicating the original template.

“We wanted to create a kitchen that would be beautiful and yet functional for both entertaining and daily use. The kitchen design was an integration of traditional and industrial elements. Alongside the old-style white wooden cabinets, we went with a custom stainless-steel hood and bold hardware choices. A textured white granite countertop finished off the look.

“Light was extremely important to our client. We enlarged the existing windows and designed skylights that frame the palm trees and the buttery roof above. We also used sliding doors that connect the space to the new covered porch with the pool beyond it.

“We feel we have achieved a perfect space where the whole family can hang out together while cooking, working or relaxing.”

Other reconfigurations included integrating en-suite bathrooms into each of the three bedrooms and the creation of a spacious playroom and study. Folding glass walls work to connect these new spaces with the porch and then on to the pool. “Visually connecting these rooms to the outdoors and flooding the house with light was an important strategy in this project,” said Hocking.

Another important strategy in the renovation was the preservation of the special characteristics and character of the original property— and great lengths were taken to achieve this, said Hocking. “Door handles, hinges, light fixtures and wall hangings were all restored and repurposed where possible,” he said. “It was essential to the owners that any new fixtures and fittings were in keeping with the age and style of the house.

“We went to great lengths to find pieces that would complement the age of the house. The chandeliers in the kitchen were sourced from a dealer in London and made in the early 1900s. Equally, the starburst cabinets installed in the dining room were display cabinets in Bergdorf Goodman from the 1950s.”

cTx and the clients also worked together to create continuity throughout the house with the flooring. While the cedar floors in the formal living room, study and hallway were in fairly good shape, the remainder throughout the house were found to be rotten and needed to be replaced. “Our client felt continuing the wooden floors throughout the home would give a uniformity to the project and would tie the different spaces together,” said Hocking. “We worked on several options to match the original cedar floors. Eventually, we went with a stained, hardened, pine floor. We varied the width of the planks to mirror the original.”

The exteriors were as carefully considered as the interiors with attention and planning going into resurrecting the grounds surrounding the house—including re-establishing dry-stone walls and protecting the mature palms.

“One of the features of the house, which we’ve tried to accentuate, is its connection with its natural surroundings,” added the owners. “The rooms are all developed to have that connection to the outside and as a result deliver the outside in.”

Nestled into the U-shaped eastern side of the house, cTx designed a dominant water feature to both compliment and contrast the view of Harrington Sound to the west. “The knife-edge perimeter detail works with the darker interior to create a reflecting pool when not being used for swimming,” explained Hocking. “The area beyond the courtyard was then planted to improve weather protection and privacy. The planting and pool create an attractive backdrop for the deep porch and an often contrasting view to that of Harrington Sound in the west.”

Lastly, the broken and run-down driveway was removed and replaced with “100-yearold granite sets sourced from the streets of Manhattan and hand laid in its place,” said Hocking.

Work began at Coral Ledge in September 2016 and the family moved in less than a year later in June of 2017. “We couldn’t be happier,” said the owners.

“cTx worked hard to understand what we wanted to achieve and applied their expertise meaningfully to realise that. We particularly valued their innovative approach towards integrating the old with the new design aspects of the home. We think they share our delight in what has been achieved.

“We’d also like to mention our contractor Travis and Frank Lewis (F Lewis Maintenance). We’d known them from before Coral Ledge and valued our relationship. They are great craftsmen, and we’d say that they are truly masterful at the restoration of historic Bermuda properties. Their attention to detail allowed the understated elegance of Coral Ledge to shine through.

“The teams at cTx and F Lewis worked very well together bringing complementary expertise to deliver a wonderful outcome.”

The judges, who noted the exquisite integration of interior and building design in Coral Ledge, called the project “serene and understated” and commented that they simply “hit every nail on the head.”