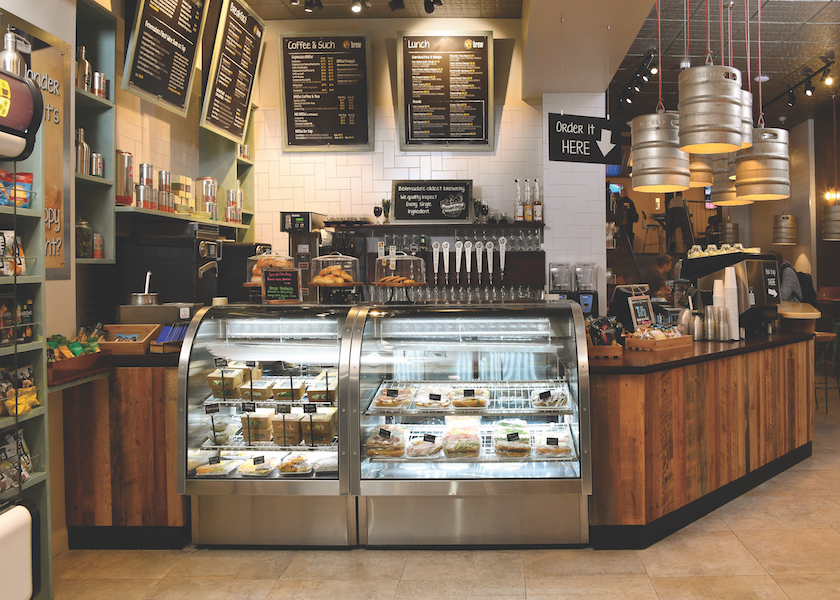 Charles Darwin once said: “It is the long history of humankind (and animal kind, too) that those who learned to collaborate and improvise most effectively have prevailed.” This quote perfectly sums up the reason behind the immediate success of Bermuda’s newest hotspot, Brew—the winning collaboration between owner, architect and interior designer.

Located on Front Street below its sister restaurant Pickled Onion, Brew is the brainchild of restaurateur Phillip Barnett of Island Restaurant Group (IRG). It was envisioned as a communal space serving coffee, beer, wine and gourmet food selections that encouraged patrons to sit and stay awhile.

“I really wanted to create a welcoming and communal space for those who preferred to grab and sit instead of grab and go,” said Barnett. “Also we needed to make a business-friendly space where people could either decamp from the office for an informal brainstorming session and toasted gourmet sandwiches, or meet colleagues or clients for a specialty coffee, glass of wine or craft beer. It was also a place where I wanted families to be able to say to each other before or after shopping ‘meet back at Brew,’ as a pleasant and fun place to start or finish the day in town.”

With a concept he stated had been—pardon the pun—“brewing” in his mind for the last decade, Barnett says the idea for Brew began to coalesce with IRG’s purchase of Dockyard Brewing Company six years ago along with the success of Java Jive, his popular café on Victoria Street. “Having run a very successful gourmet quick service café Java Jive for 10 years, I wanted to leverage its success and brand recognition with our new ownership of Bermuda’s (then) only brewery,” said Barnett. “So along came the idea, Brew by Java Jive and Dockyard Brewing Co.”

As the space below Pickled Onion became available the opportunity was ripe to bring the concept to life and Barnett hired Geoff Parker Architects (GPA) and Commercial Interiors Group (CIG) to collaborate on the project. 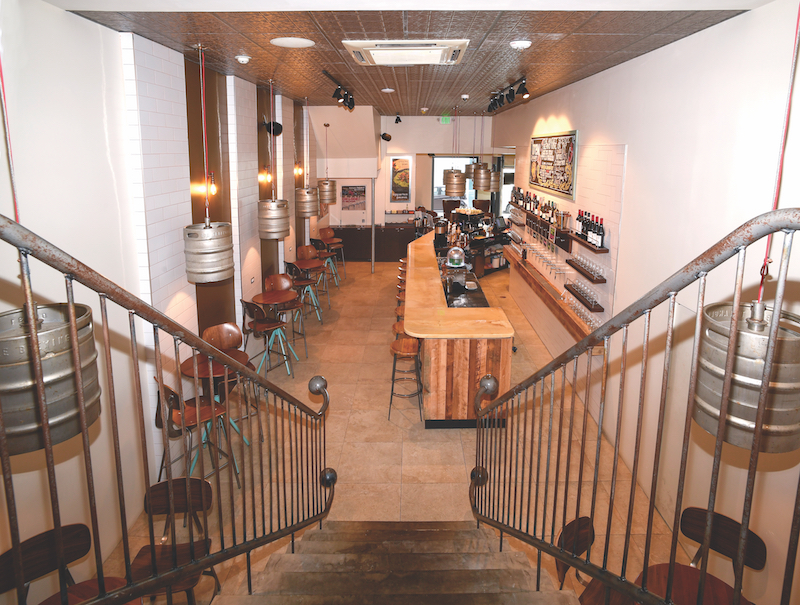 “GPA led the design process with continuous input from CIG throughout in a true design collaboration,” said GPA principal Geoff Parker. “We produced all of the drawings and coordinated the rest of the design team, client, specialist suppliers and the contractor.”

The CIG team, led by design director Darcy Robertson, provided the spatial design for the layout of the lounge and café seating along with the conceptual design for the furniture selections, lighting and general finishes.

“Phil Barnett first envisioned the concept back in 2016 as a street level, gourmet but casual quick service hangout, and hip coffee and draught bar,” explained Robertson. “He recognised the location as a top Front Street destination for energetic and innovative atmosphere on both levels (with their sister location Pickled Onion above Brew). IRG also wanted to provide a totally unique and one-of-a-kind spot on Front Street to not compete on cuisine style with other restaurants.”

As typical in the restaurant industry, budgets were tight and timelines were even tighter. The preliminary plans for the 3,266-square-foot space were made in April 2018 and the existing interiors were demolished throughout May and June. All the furniture, lighting and millwork were selected throughout September, the building permit was received in late October and the restaurant/bar was formally opened on November 12. 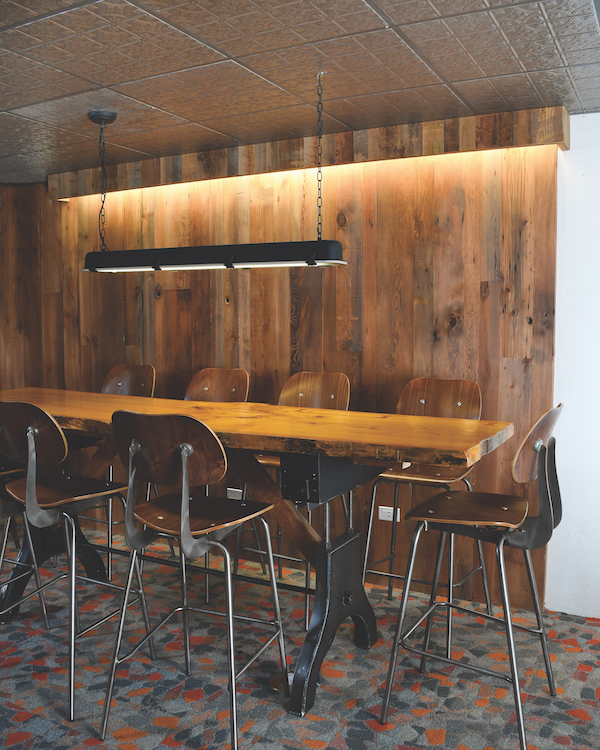 “Not one area was not touched—it was a full renovation,” said Robertson. “Everything was stripped back to the bare structure from flooring, walls to ceiling. New customer washrooms were added and the back of house areas for staff had renovations for a locker room and a prep kitchen.”

The long, narrow space originally had varied ceiling levels—one of the main areas the team wanted to fix early in the design phase. However, according to Parker, “Working on an old building is always a challenge as you never know what you may find once you start construction.

“In removing the old ceilings there were several steel beams that were unexpectedly found spanning the main space,” he said. “Happily, they were found to be redundant and were then removed allowing the high ceilings to be maintained. The opportunity to gain such a high-ceilinged space was an opportunity that rarely comes along. It really allowed the space to gain the type of atmosphere we were looking to create.”

In the end, they chose a metallic bronze Tincraft ceiling because “although new, it has the look of an old coffeehouse at the turn of the century,” said Robertson. 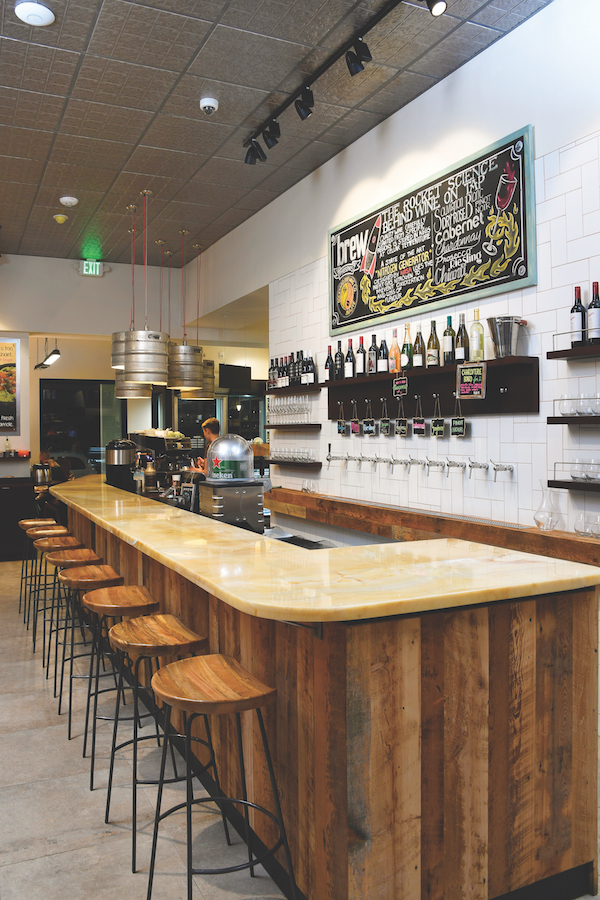 Flooring was another challenge as the team originally envisioned sealed concrete floors for a rustic and industrial look; however, once the flooring was removed, the levels did not match. Instead, they went with concrete-look porcelain tile from Bermuda Brickyard chosen for its durability and to mimic the original concept. In the upper lounge area, they chose carpet sourced from Windward Supplies to soften and warm the space and to aid in acoustics.

A great deal of repurposing also went into the design considerations throughout the project. Reclaimed boards were salvaged from a 1930s factory in Cambridge, Ontario, and installed locally by A-Plus Carpentry on the walls, bar front and banquettes. The Onyx bar and the majority of the equipment (other than a few refrigerators) came from the recently closed RumBar and Java Jive.
Perhaps the most interesting and successful repurposing can be seen in the unique Bermuda Triangle Brewery keg hanging lights. Using old, discarded beer kegs, the team worked with Sea-M to create the bespoke feature lamps that work perfectly to create the rustic theme the designers were going for.

“It was to be an eclectic space with an industrial, repurposed feel but balanced with rustic wood accents and orange tones to make it cozy and comfortable,” said Parker.

The rest of the furnishings were sourced through several suppliers including West Elm, Wayfair and Industry West, said Robertson. “We wanted furniture that had the reclaimed rustic feel but also with a slight modernity. Wingback leather chairs make a comfortable spot to have a coffee and check email. The lounge chairs in dark blue fabric provide casual seating while allowing dining. The café tables can be adjusted from dining height to bar height.”

“Most of the seats have access to power and USB charging so the space can be used to work out of the office or just charge your phone,” added Parker. “There is enough seating capacity that you are encouraged to stay and lounge rather than be chased out when you have finished your meal.”

Eminence Tile & Stone were responsible for the installation of the wall tile and the designers chose a herringbone pattern to subtly add visual interest to the standard subway tile. The burnt orange grout was a custom-mixed colour which made the simple white tile unique and gave it a bit of warmth. 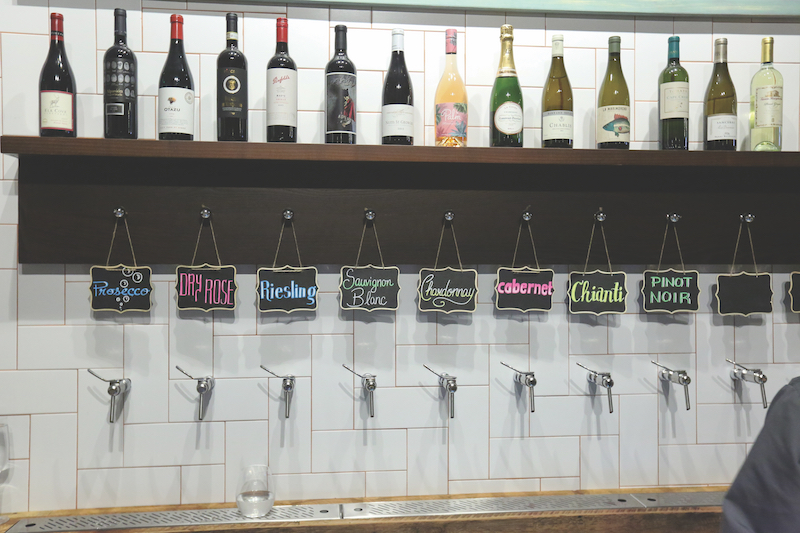 Brew has one other outstanding feature—their unique wine on tap, which is “literally rocket science” according to Barnett. “Twenty-litre kegs of region specific varietals (Pinot Noir from Napa Valley, for example) are pressurised with an inert gas blend (no oxidisation or loss of flavour to the wine) via a NASA designed nitrogen generator that pulls nitrogen from the air and stores it in a tank. The system works basically the same as a draught beer tap, but with specialised equipment and nozzles for wine. Most importantly it is fun, fresh, unique and value priced.”

Our judges were impressed by the cleverness of the wine-on-tap feature and extremely enthusiastic about the overall quality of Brew’s design.

“Everything was well designed into the space, nothing was forced,” commented one judge, while another stated: “It is a very successful, well-thought-out design.” Another mentioned how all the different spaces worked together to create one cohesive layout and all appreciated the considerable use of recycled and repurposed materials. 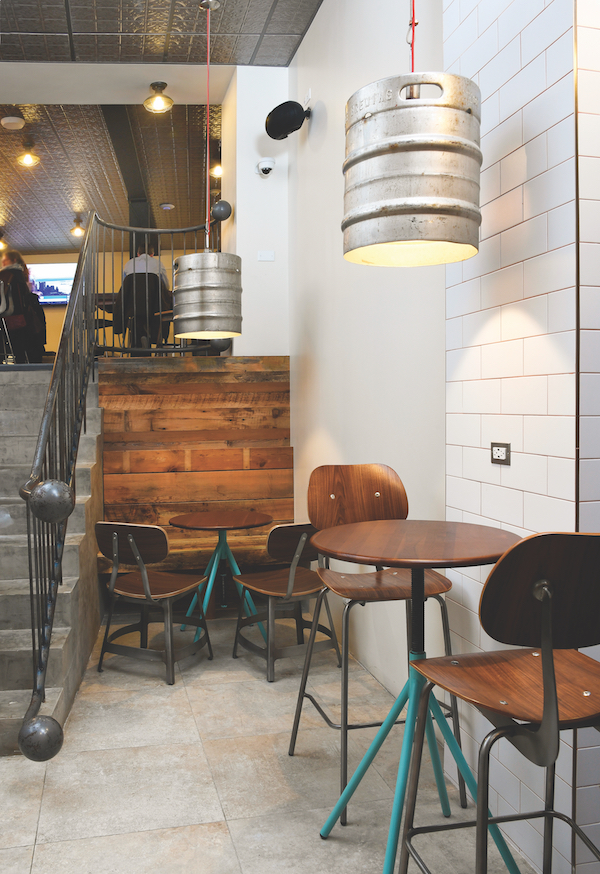 “Going to Brew and seeing it packed with customers is proof that Bermuda was wanting a space where you can have a breakfast meeting, meet friends for conversation and get a coffee past 4 p.m.,” said Robertson. “It’s also nice to have a place where those who don’t drink can still feel included at happy hour,” added Parker. “Or a casual place to get a coffee or nightcap after having dinner somewhere else in town.”

“Whilst I am pleased with the results, it ultimately is about the guests liking it and feeling both comfortable, welcomed and like they have arrived somewhere fresh, new and unexpected,” concluded Barnett. “Our guests’ feedback has been extremely positive. The overriding comment is ‘I don’t feel like I am in traditional Bermuda.’”

The space had to be part trendy coffee house, part craft brewery. The ‘wine on tap’ concept developed as we were into the design.”