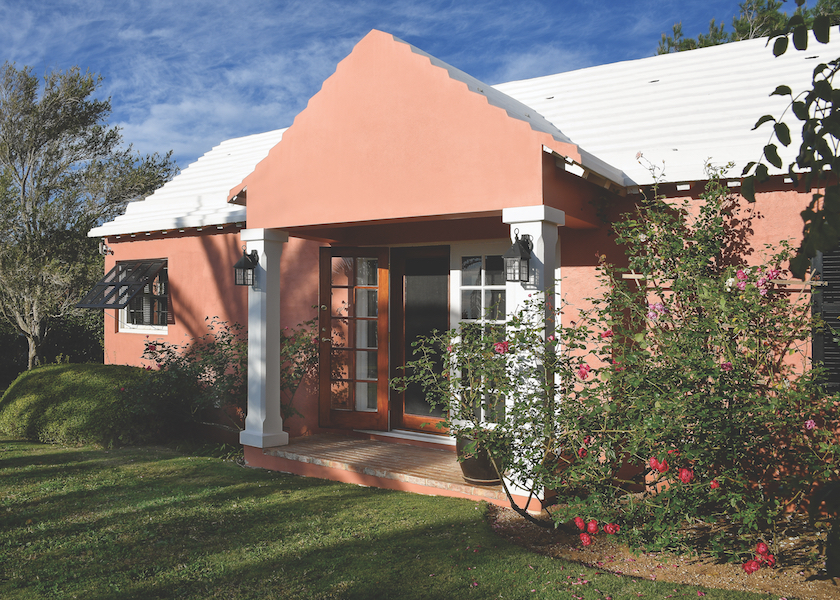 Full of Bermuda charm, this grand dame of Woodstock Hill has been generously renovated by OBMI to bring her back to glory and into the twenty-first century. When current owners Heather Robinson and her husband Danny bought the house in 2015 they took on the challenge of retaining the character and charm of the historically significant house while creating a modern space for them and their five beloved rescue cats.

The history of the nearly one-acre property in Paget dates back to the 1700s. The “Pruddence Plan” of 1831 shows a cruciform house on the property but there was a house on the site as early as 1723, which was probably rebuilt later in the 1700s. By the time Dr. Robin Lang bought the property in the early 1960s the house had sadly fallen into ruins. Using the expertise of Bermuda’s most famous architect, Wil Onions, they demolished the original house, which by then had become uninhabitable, and redesigned a one-storey, three-bedroom home in Onion’s signature style. (Another renovation was undertaken in 1987 by an unnamed architect.) 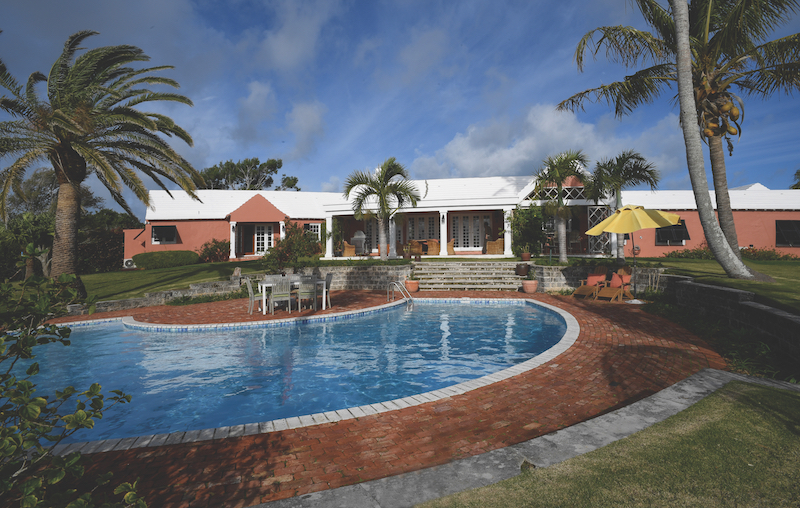 “OBM has the drawings dating back 1961 and before. The Wil Onions signature long and high roof lines define the beauty of this home,” said OBMI’s managing director and interior designer Michele Smith. “It was in dire need of upgrading and opening the bones of the house into what was originally designed to be a flowing home with long rooms and large windows with wonderful cross ventilation. Even though some air-conditioning has just been added for the first time, the orientation of the home and original placement and design of the long windows are perfect for cooler breezes as in days gone by.”

Now retired, the owners were looking for a quiet home to enjoy relaxing with their beloved felines, some summertime entertainment and plenty of space for guests and family to visit comfortably.

As typical of the 1960s era, the home was originally designed with closed-off rooms and odd spaces—far different from the open, airy style most owners prefer today. In order to bring the home up to modern standards, the initial renovation plan included a major kitchen redesign, which involved opening it up to the family room; a complete revamp of the master bathroom, which included raising the sunken floor and reducing the size of the windows; enlarging the master bedroom and closet, which required removing and enclosing the former front door to create more usable space; and adding a powder room. 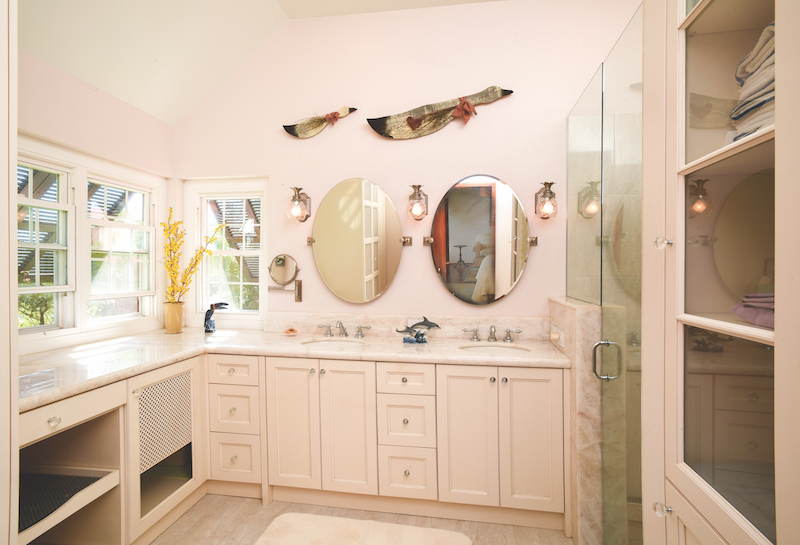 As with most renovations, the project evolved into redoing the flooring throughout, replacing 98 percent of the windows, restoring the original main entrance, installing central air into the new open plan living/dining room and moving air conditioners into the other spaces. Other work included adding three new porticos to cover all existing doors, and additions to the patio—including a seated bar area off the kitchen windows. Three new pits were dug and utility rooms were created at the western end of the house. Strategically hidden and designed for maximum exposure, solar panels were also added to the roof, resulting in a somewhat extensive roof repair work in the process. Design began in early 2016 with renovations starting in June of 2017 and the project was completed in 2018.

“The intent for the renovations was to open up what had been designed to be open in the first place, so it wasn’t as difficult as it was enjoyable,” said Smith. “The simplest designs are the most breathtaking in this case. It was a pleasure to redefine the luxury of the living space and master bedroom into what it was initially designed to be.”

“Woodstock had good ‘bones’ to work with,” added Heather.

The kitchen was a masterful collaboration between the owners, OBMI, Carole Paterson of CP Design in Toronto and Luxia Kitchens. “Michele came up with the idea of moving the doors and opening the kitchen up so it was lighter and more open to the rest of the house,” said Heather. “Carole was an integral part of sourcing everything from the tiles, counter tops, all the furniture, fixtures and equipment and coordinating its shipment to Bermuda.” 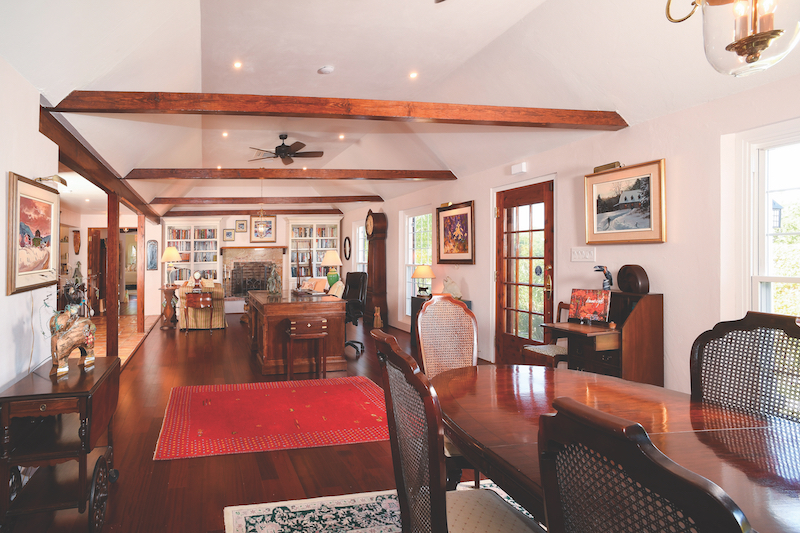 Both Smith and Paterson were involved extensively in the design and functionality of the kitchen. The quartzite island counter top was specifically chosen by Heather not only because of its colour and design—but mostly because of the slab’s natural “porpoise” pattern in the centre of the stone which she became enamoured with. Three large slabs were purchased from Interstone in Toronto and were carefully cut and polished locally by Eminence Tile & Stone.
A unique aspect of the kitchen design is the complete absence of electrical plugs anywhere on the backsplash. In order to keep the seamless look of the Ottoman diagonal polished marble backsplash, the electricians installed the plugs hidden underneath the cabinetry. 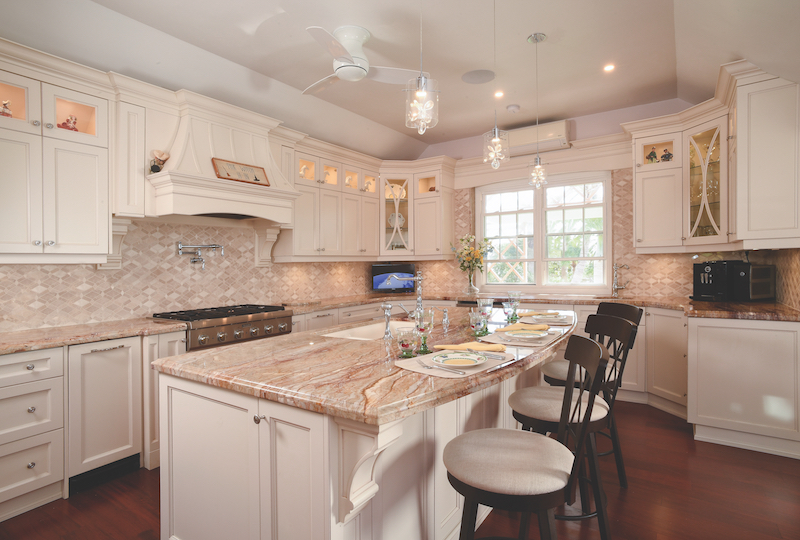 “It was Carole Paterson who came up with the idea and who has done this on a number of her high-end projects in Toronto,” said Heather. “Doing the plugs under the counter makes for a much tidier look, adds to the beauty of the backsplash by not having ugly plugs visible and also prevents electrical installers from placing plugs at different heights or even installing them crookedly. It generally makes for a nicer visual optic, highlighting the backsplash rather than the outlets. Michele cleared the design change with the Department of Planning, and it was a go.”

One beautiful thing about old Bermuda houses is the vast amount of cedar millwork often used throughout. While the original configuration didn’t work for the new owners, they repurposed all the cedar doors and shelving and have been restoring them with the help and guidance from Dwayne Burrows of Fine Woodworking Ltd. Shelving originally used for books is now used in the walk-in master closet while freestanding units have been incorporated into various rooms throughout the home.

As previously mentioned, the owners have five cats ranging in age from six to eighteen that share their home. Because in some cases there can be a “difference in opinion between them,” according to the owners, they decided to incorporate spaces for them separately. Thus the designer created custom cabinets in both the powder room and the master bathroom for both litter and feeding stations. “This allows our pets their privacy and gave us an area which is accessible while still being visually pleasing,” said Heather. 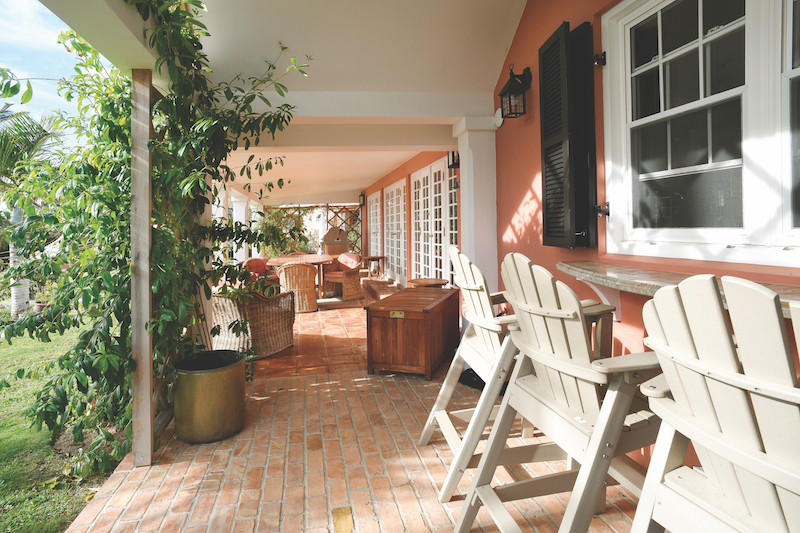 The judges agreed. They complimented the warm and comfortable feel of the carefully considered renovations and appreciated the successful planning done by the designers. One stated how the renovations to Woodstock were “tasteful” and they “felt very much at home there.” Another commented on how the entire project “simply resonated with me.”

“I honestly believe when making any changes to an older home that the home’s history, even if altered over the centuries, should be taken into careful consideration and the need for its dignity to be incorporated in those changes,” added Smith. “Both the Lang and Young families who previously lived here talk about the love they felt and feel for Woodstock. It was really important that the decisions we made moving forward only enhance the home they remember so fondly—while bringing it up to our clients’ needs and expectations.

“There is something to be said of old relics. Never underestimate what treasures can be found and new friends made.”

“It was a wise decision to have chosen OBMI for our project,” concluded Heather. “The expertise and knowledge they brought to the project was exceptional. The changes that were made and the decisions taken have allowed this grand lady, Woodstock, to come into the twenty-first century retaining her charm, elegance and, most of all, her Bermudian character.”