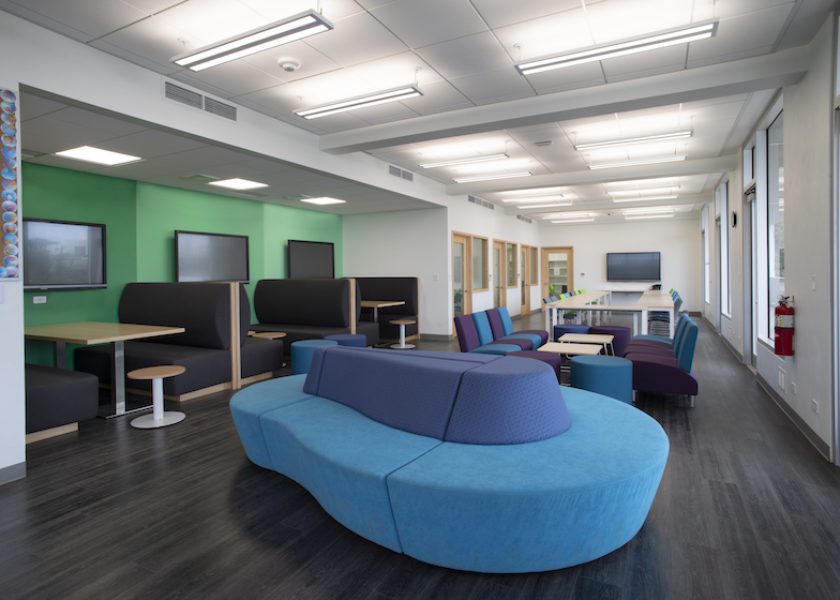 Just like Somersfield Academy’s International Baccalaureate (IB) programme, the Centre for International Education, which is the school’s new IB Centre, is a modern, brand-new structure, designed inside and out by architects and interior designers at Cooper Gardner, that stands across the playing field in dramatic contrast to the rest of the more traditionally designed school.

“The main thing I was concerned about was getting an environment that was between high school and college so the children really start to feel like the drivers of their destiny and more independent,” explains Kate Ross, Head of Diploma Programme and DP Coordinator, who runs the new programme at the school. “The flexibility of the classrooms was something that we really needed to have so that you can have small groups and seminars.” 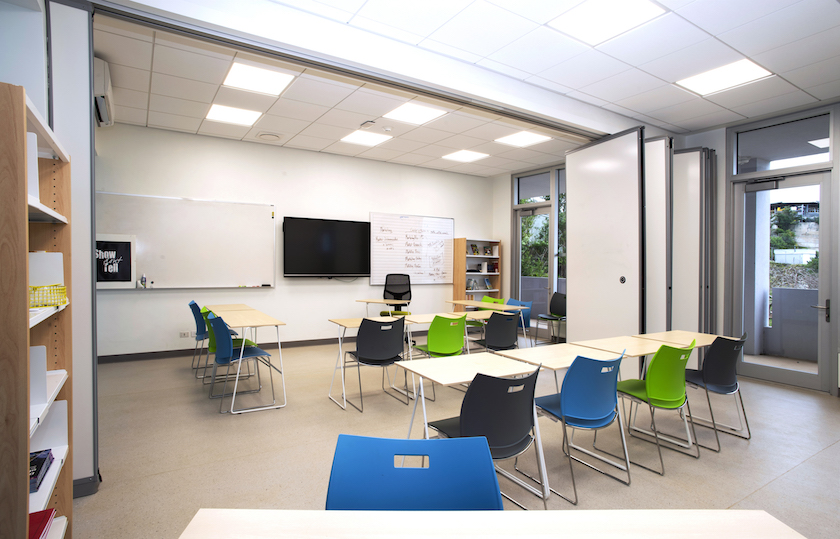 In order to achieve this, says John Gardner, former principal architect at Cooper Gardner, “we made a conscious effort to go modern. We wanted to do something fresh and exciting and acknowledge the kids being at a higher level and not being so sentimental or vernacular.”

This was the last “decent-sized building” Gardner was involved in before deciding to retire from Cooper Gardner after 34 years. It’s “John’s swan song,” he says!

And what a swan song it is. The dramatic concrete building is three floors of fully accessible and flexible classrooms with moveable walls, a common room, library, music rooms, technology areas, an art room, a rooftop area with a private access gate for the IB students, wide verandahs that double up as social areas for the students, and an elevator core. 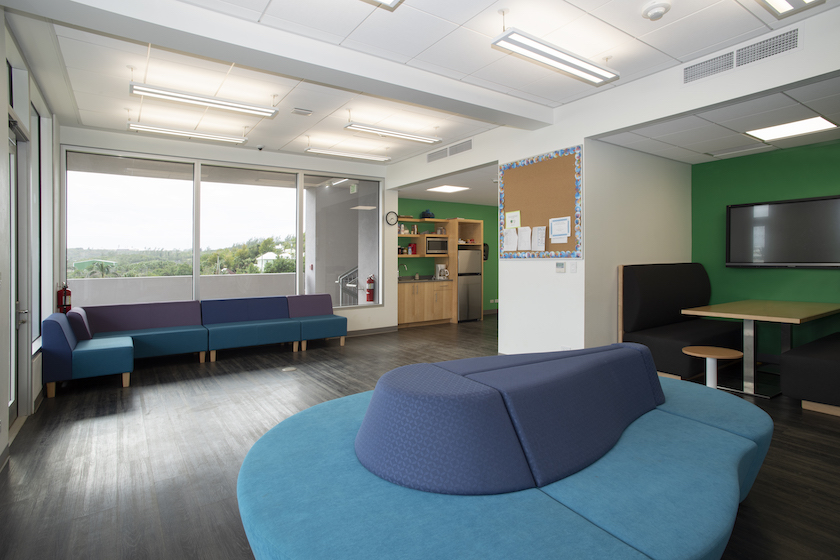 “The early design decisions had a lot to do with collective space and where you congregate,” says Jonathan Castro, who has taken over from Gardner as principal architect at the firm. “On the lower level, which is repeated on the upper two floors, are benches outside each classroom. We utilise that as that’s where the kids are going to hang out and the wraparound verandah provides a lot of shading without diminishing a lot of light. It’s where everyone can look off at the fields. And collaboration was key. For example the verandah benches as community areas arose from a full office discussion including input from Beryl Brown who was sharing office space.” 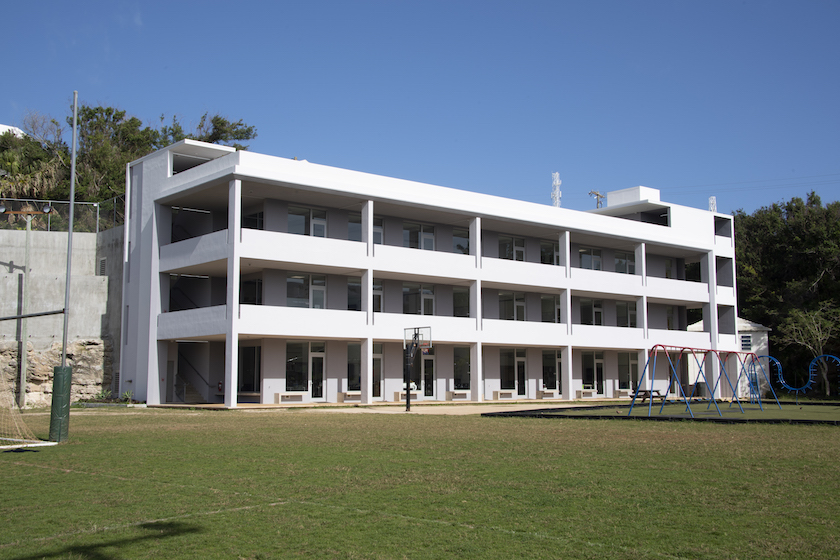 Because of the heavy concrete nature of the design there was a danger that, from the outside, the building might look too much like a box, so Gardner explains that “from a form point of view, we were interested in creating a frame all the way around so if you look at the sides, there’s a blade edge. We were trying to tie that and have that wrapped at the corner.”

There are thin LED lighting strips along the verandah ceilings and instead of having the concrete railings going all the way to each of the pillars they added narrow slits, which the judges agree was very effective. “The concrete made it kind of sculptural,” they say. “The way the railings had the little cutouts, the depth of the verandahs allowing them to be used as a circulating space gave it a pre-collegiate feeling. The verandahs took away from the starkness of the building.” 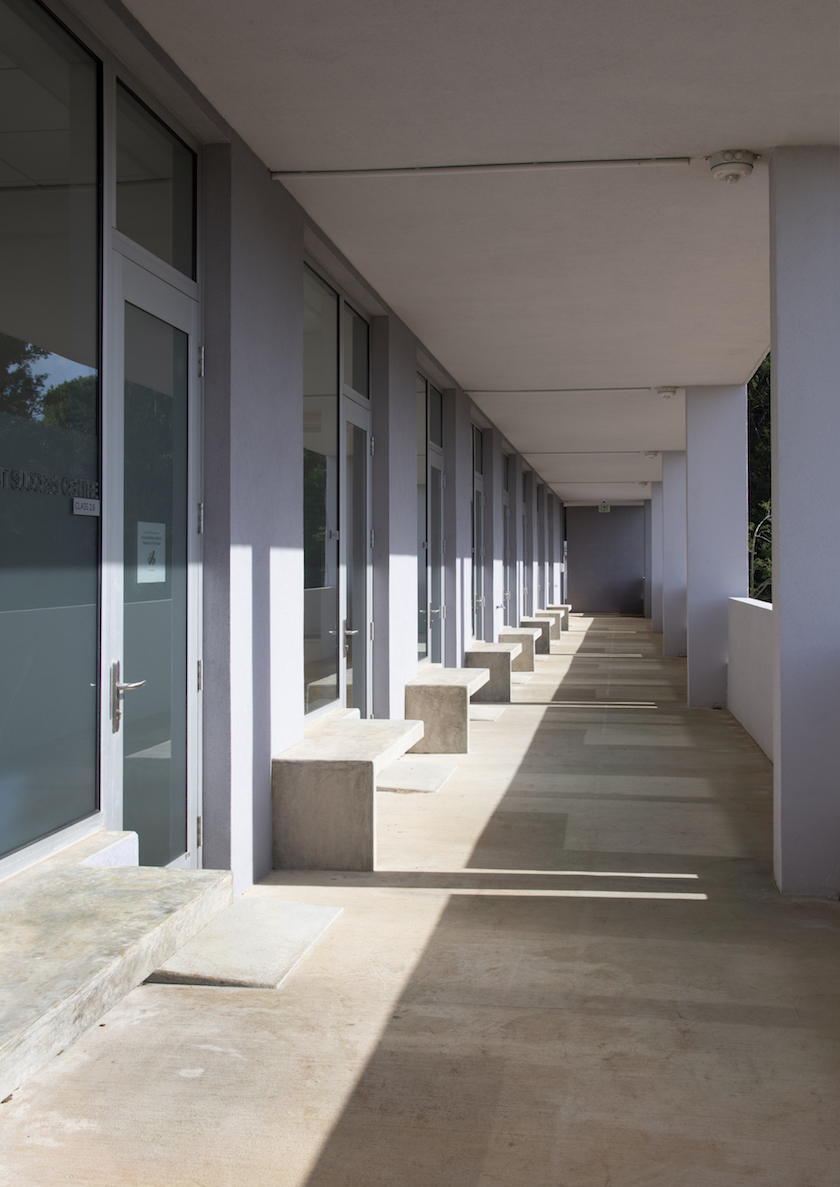 Another unique feature to the building design is the fact that the glass-fronted classrooms all come in and out from the verandah, not a central corridor, which adds to the social feel of the outside space and gives all the rooms a light and open feeling.

“I loved the glasswork,” says one of the judges. “The windows leading onto the patios for the classrooms brought in a lot of light. It made it look not as institutional as it could have been if the windows had been smaller. They were open glaze. You could see into the classroom. I liked the openness. It was an inviting space which brought the outside into the inside.” Another judge agrees that the floor-to-ceiling glass windows stopped it being “a little monolithic.” 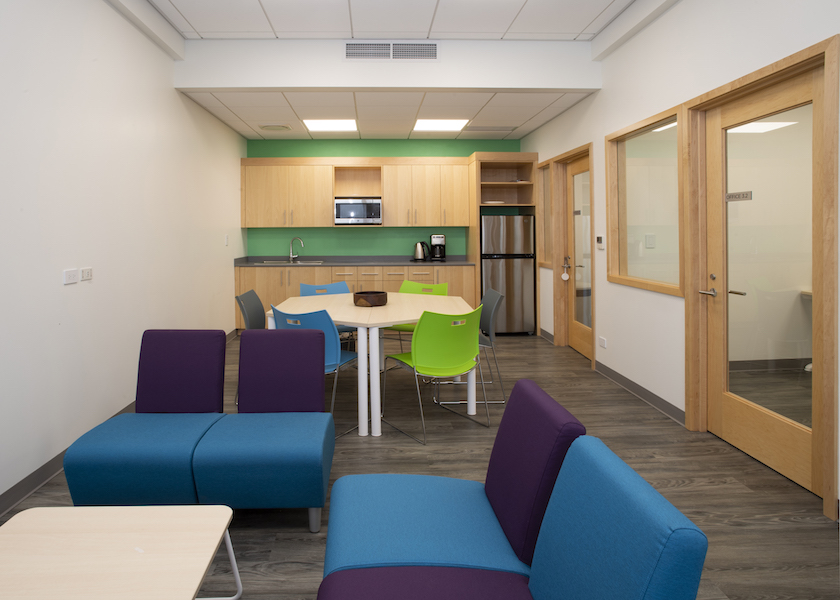 In addition to classrooms there is a large and brightly furnished common room containing small reading areas as well as a common area with soft seating for students to use during their spare time. “It doubles as an unwinding area,” says Castro. There is also a large table-and-chair area, smaller rooms that can be used for private study or compact group learning, and off the common room is a library, which can also be accessed directly from the outside verandah.

The building’s roof is where the students have their own private entrance, again adding to the collegiate feel. “This gate is designed to be as much the front door of the building,” continues Gardner. “There isn’t a front door off the field. It’s more like a filter. You just go in and off it. We ran a floating slat roof here, we did a very solid bench. We used that same vocabulary of just the heavy concrete, like Chilean architecture—the residential architecture down there, that’s very cool. Just trying to do something a little different.” 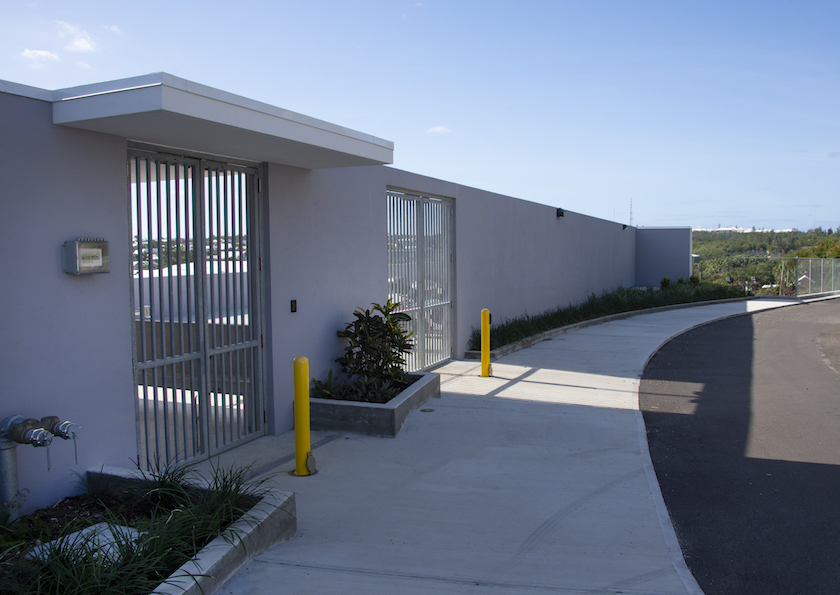 Much of the roof is currently still a blank, but flexible space, and there is a lot of potential for a variety of creative uses. “We’ve had designs for photovoltaics to go on it, a green roof, some combination. It could become a complete garden, it could be a parking lot, it could be shaded,” says Gardner.

Overall, the judges agreed that the building design was not only responsive to the parameters Cooper Gardner were given, but that it was also “really creative and cohesive.”

“I thought it was cool that it was modern and that it was tucked into the corner,” says one of the judges. “I think he was right to get away from the vernacular of the rest of the building and I think there were a lot of creative details, like the benches.”

Another adds that “I liked that it was dramatically different from the rest of Somersfield, especially being the IB programme. I liked the environment of nooks and crannies for reading and studying that was really in line with the IB programme and the pockets and the learning and engagement.”

When asked what she thinks of the finished product, Ross answers, “It’s a treat. It’s a great facility.”

“At the end of day,” concludes Gardner, “what kind of environment are you providing for the students to work in? You ask your children to be the best they can be and to be forward thinking so why not put them in a building that does the best it can to be like that.”