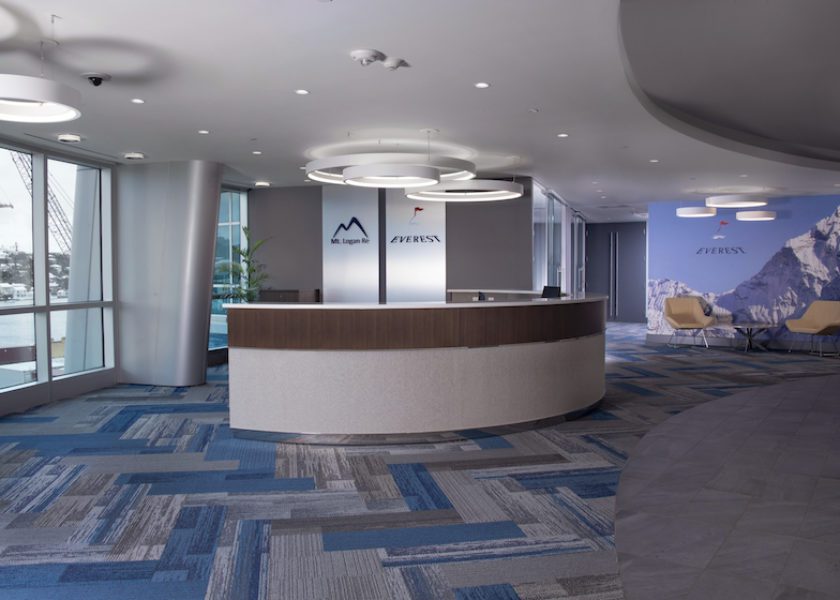 When Everest Re (Bermuda) Ltd. and its affiliate, Mt. Logan Re, Ltd. (both member companies of Everest Re Group, Ltd.), decided to co-locate their operations into one location, they needed to incorporate not just extra staff into their office space, but the two corporate identities as well. Based on the eastern side of the fourth floor of Seon Place, colloquially known as “the John Swan building,” with no next-door neighbours to their west, additional staff could all be accommodated on the Everest Re floor, but a horizontal expansion was needed.

Enter Dawn Dunstan, lead interior designer at L&S Design Ltd.: “The entire west side was a completely new fit-out,” she explains. “What Everest Re wanted us to do was update and upgrade the east side to match the finishes and have the same aesthetic as the west side. Their previous space was quite neutral. They wanted a bit more colour on the floor and walls and for us to incorporate more of their branding colours—blue and red—so we brought that into the aesthetic and we did quite dramatic and bold carpet patterns.” 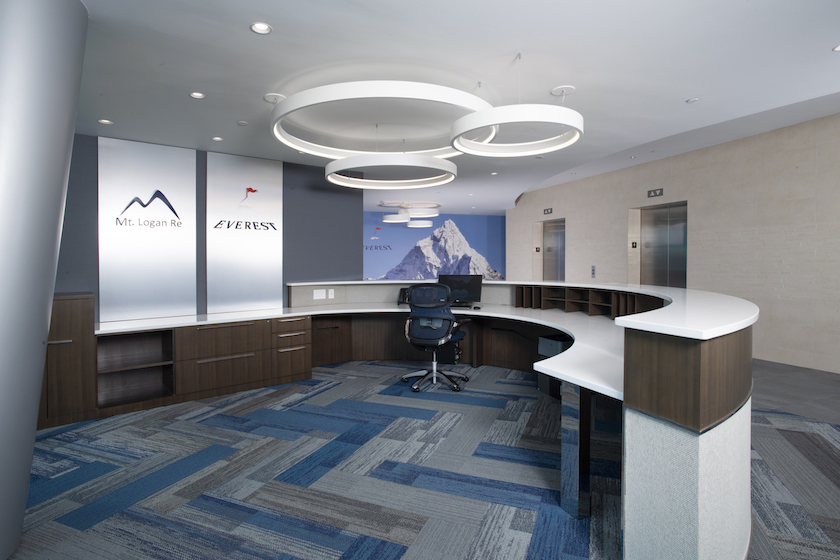 It was the carpet that clinched this win for our judges: “I loved it! It was all about the carpet,” exclaims one of them. “The carpet was probably the most prominent feature and made the whole space look attractive.” They also enjoyed the way it was used to create flow from one area to the next. “You don’t get a lot of soft furnishings in a commercial environment so it’s one area where you can use it to differentiate zones and spaces in that way,” they add.

The mountain theme and colours from both company names and logos is apparent throughout the office, with “pops of red,” canvases, huge murals, angular shelving, even the glass mosaic backsplash in the kitchen has white, grey and blue peaks and troughs, but it is in the carpet design that it has been most imaginatively used. 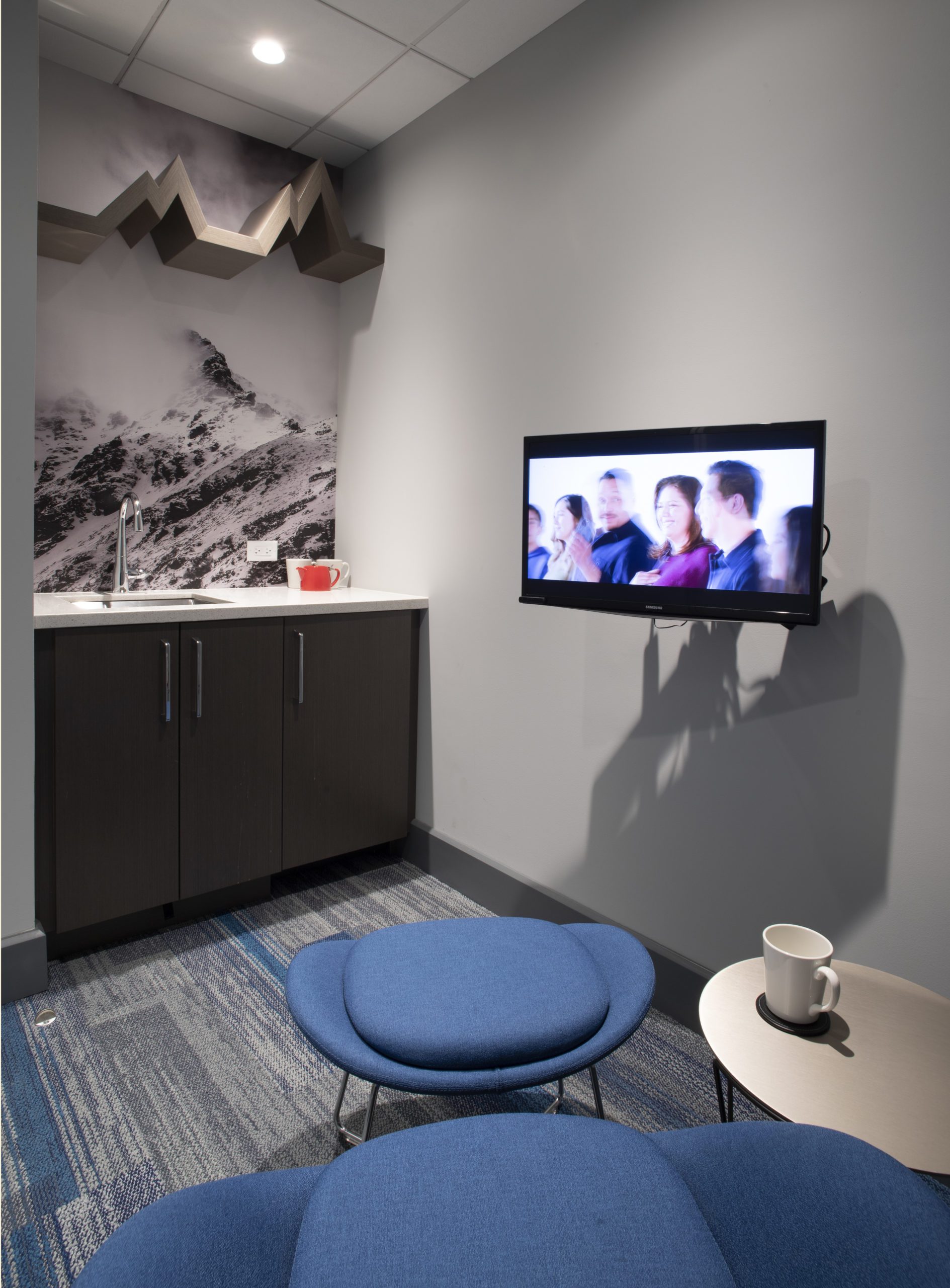 “The carpet was fun,” continues Dunstan adding that she was pleased with the bold use of colour and says they enjoyed the patterns. The reception area carpet as you come out of the lift, for example, features a “bold and lively” herringbone pattern, which is both striking and in keeping with the corporate identity.

In addition to the new flooring, the space was designed to include additional offices, workstations, meeting spaces, a brand-new staff kitchen, a new unisex shower room, a telephone and mother’s room, a filing room, and a copy and print area.

“We worked very closely with Everest Re’s office manager, Amanda Hatherley, and their overseas facilities team on the design and project management,” adds Dunstan. “They were all very supportive of the design process and were a joy to work with.”

During the entire fit-out and refurbishment, the Everest Re side remained operational, which, says Dunstan, was the most challenging aspect of the project. “We had to be very mindful of that and other tenants. We had to schedule and work around them still being able to operate, so noisy work was done after hours and at the weekends. We had to make sure power and services weren’t disrupted and that the clients and staff were inconvenienced as little as possible.” To help achieve this, Dunstan and her team worked with general contractor Bermuda Interiors to phase the work. 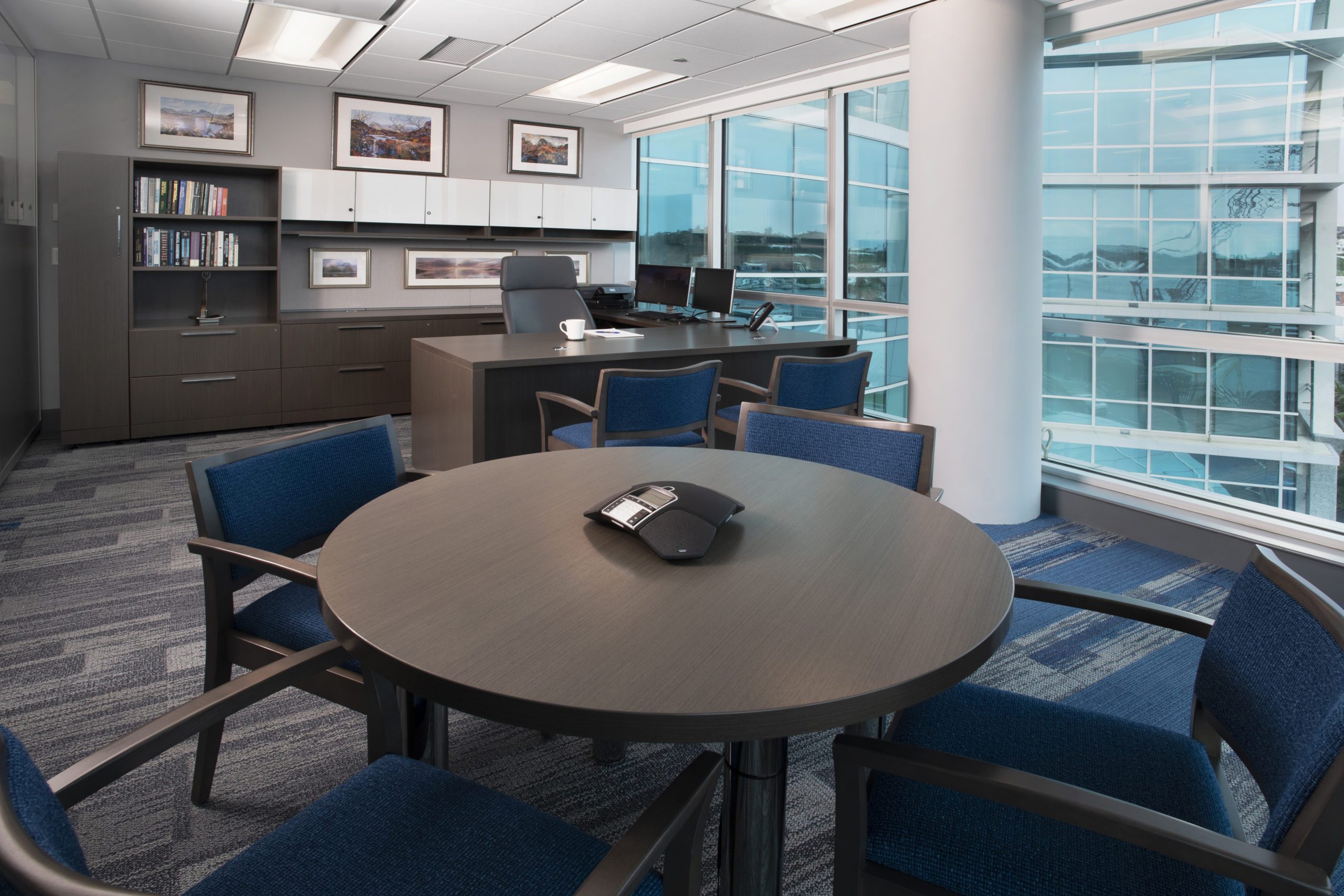 Another very prominent feature of the office is, of course, the sweeping view of Hamilton Harbour and all the natural light available from the large windows at the front of the building, and the office space has been designed to take full advantage of this. To maximise the light and open feeling, they used the Steelcase Vertical Intelligent Architecture (V.I.A.) demountable wall system from A.F. Smith, which is floor-to-ceiling glass and can be taken down and reused.

Most of the workstations, which are either new or have been reconfigured, are positioned so as many staff as possible can enjoy the light and the views. Dunstan also reupholstered the bench cushions in the workstations and replaced all of the existing desk chairs, giving the workspaces a fresh new look. The meeting rooms are at the back, which also works well for the AV equipment.

“Thought and consideration was given to the north side of the building versus the south,” comments one judge, adding that the space was planned well to have the employees at the front. “I think they were very thoughtful in how they laid it out. If I was an employee, I would not be unhappy working in those cubicles, with that level of frosting.” 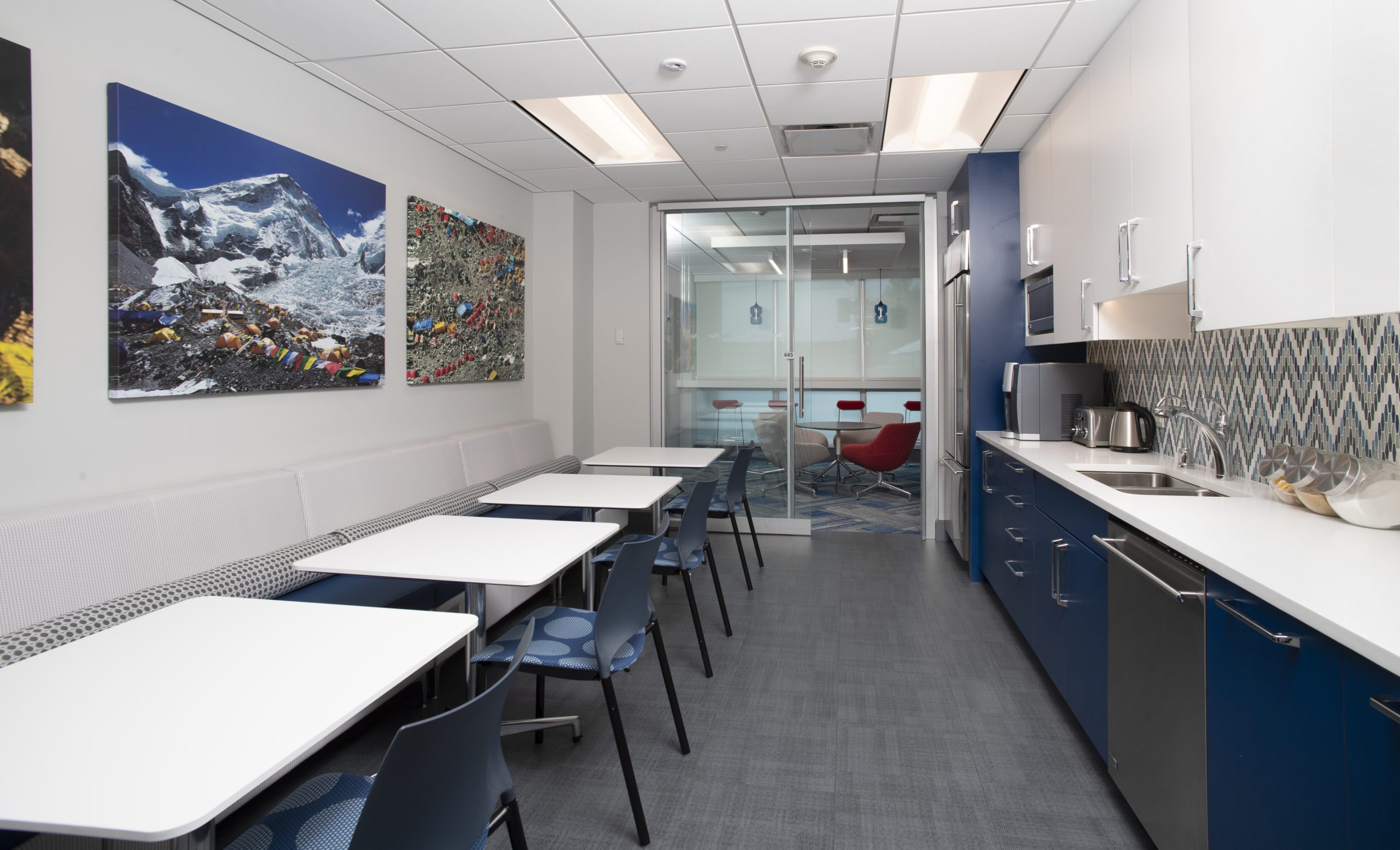 In addition to a large, new employee kitchen, which one judge praises for being “beautifully laid out, warm and inviting,” is an additional communal space which can be used for extra dining, open meetings or somewhere for staff to relax on their lunch break. Again, the company’s identity has been incorporated into all of that décor with sky blue cabinetry and canvases of Mount Everest base camp, which include colourful tents and prayer flags.

The main kitchen is located on the west side, so for the convenience of employees on the east side, a smaller coffee station has been installed so you don’t have to go through the whole floor to make a quick cup of coffee.

While peaks and angles play a large part in the overall interior decoration, in stark contrast to this is the expansive reception desk, which dominates the entrance area, and the circular lighting above. In the lobby there is a curved ceiling and this has been cleverly mimicked in the shape of the desk. “Beautifully curved,” the desk was custom-designed by L&S Design Ltd. using walnut, which was stained to match the office furniture, with fabric, metal and stone finishes. Large circular pendant lights hang above the desk and two reception seating areas. “They are diffused direct/indirect light fixtures that create a luminous halo,” explains Dunstan. “We used four different sizes. We used larger ones over the reception desk to try and fill the space because it is a very large desk. Anything too small would be disproportionate. We used the smaller versions to define the two seating areas.” 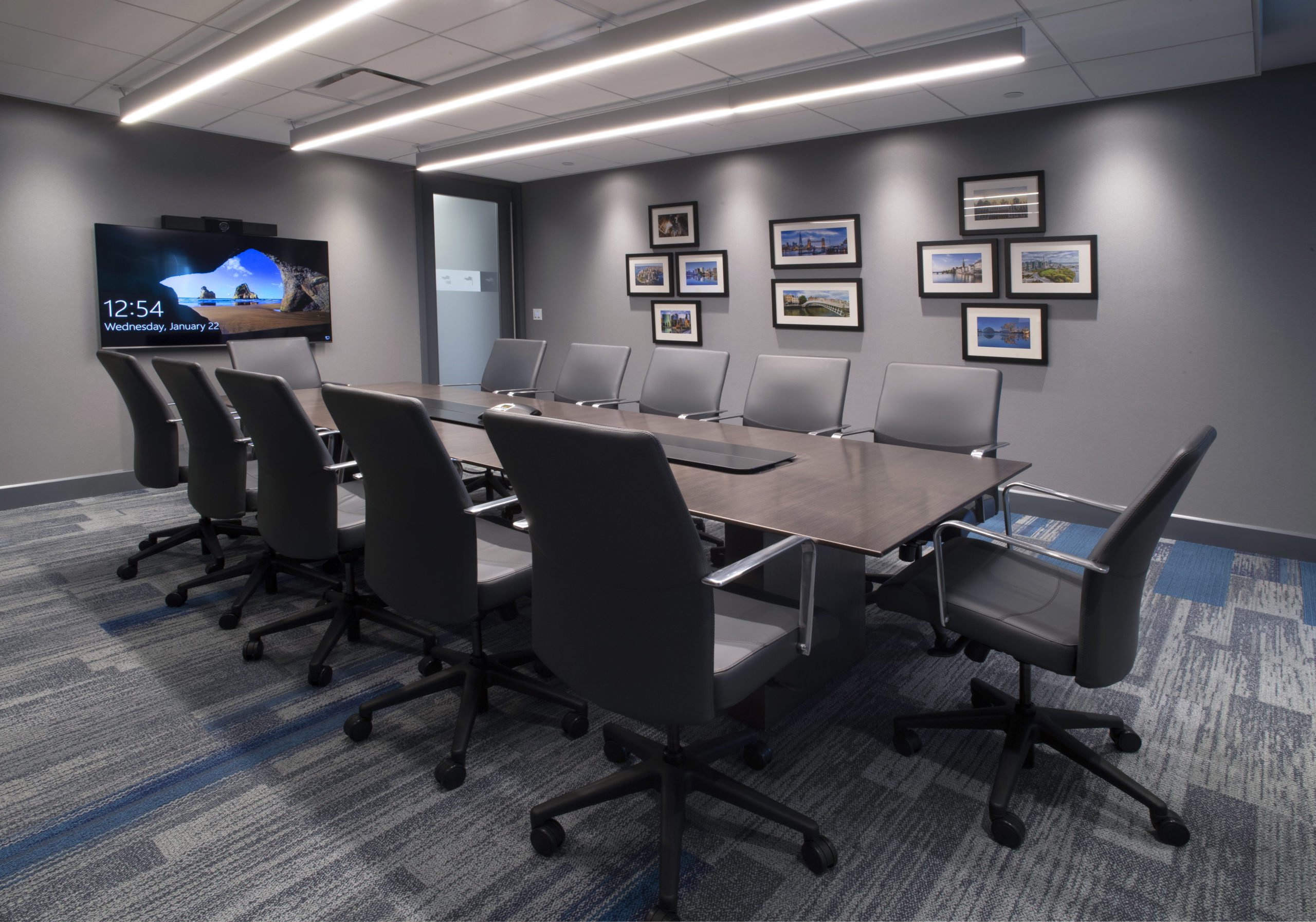 Also a change from the angular and mountain-themed artwork are photographs in the Everest Re boardroom of every city where the company’s affiliates have offices and on the outside of the boardroom are dramatic photographs of tall ships, which were taken by a former staff member and add a personal touch.

The judges all agree that the way L&S Design Ltd. had taken the company logos and identities into the interior was very compelling. “The fact that they reiterated the mountains on the Everest side and the flags on the Mt. Logan side, so differentiating the space but still connecting within the finishes by colour choice and carpet detail, and changing it up, was interesting.”

But what did the staff think? “I’ve had very positive feedback,” says Dunstan. “I think they all really find that it’s light and bright.”