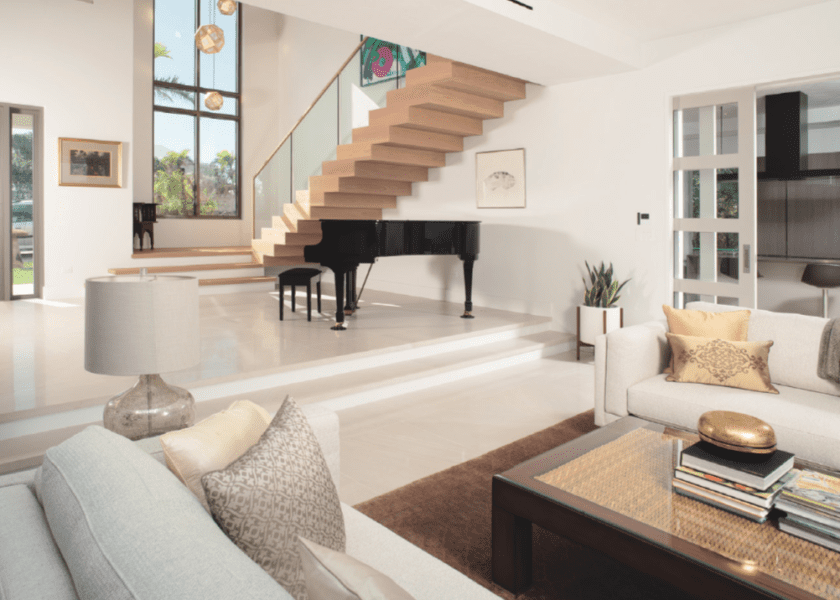 The owner of Greenlands is an artist and when you walk through the front door of this Tucker’s Town home you are greeted by a jaw-dropping masterpiece. Not the oil on canvas kind but a view that takes you across an exquisite sunken living room, out over a sparkling infinity pool to the water and landscape of Castle Harbour beyond.

While the original pool house and garage structures were retained, the main house was completely rebuilt. “The client was looking for a contemporary home with a comfortable flow between rooms and opportunities for entertaining in various locations,” explains lead designer and owner of cTx Design Group, Jacob Hocking. They also wanted “to take advantage of the sweeping views, prevailing winds and to maximise its location on the property.”

In order to do this, they had to raise the elevation of the new house by two feet to get “the best combination of views and connection to the grassed areas,” and they filled in the old swimming pool, bringing the new one up to the same level as the house and closer to the outdoor entertaining areas. 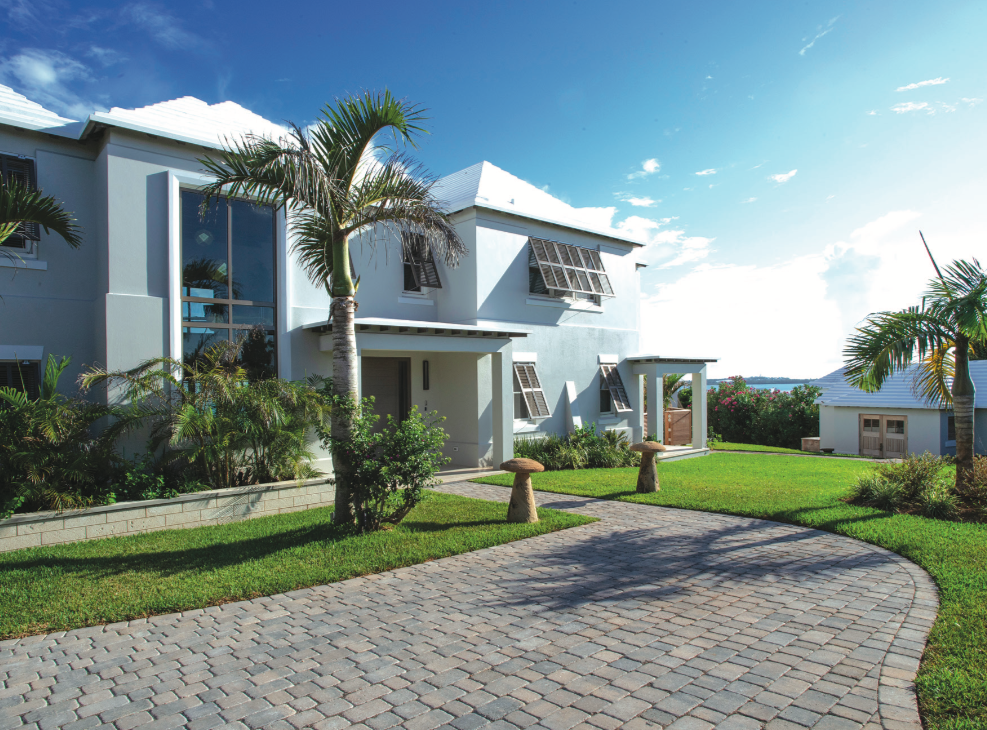 When you arrive at Greenlands, it is noticeable how much it blends into the surrounding area, but the minute you look through the front door you are awestruck by the “open volume” and the way “it draws you in to the outside. I loved the way that space flowed,” exclaims one of our judges.

Modern, with soft features, is definitely a theme both inside and outside the house. The outside was “very slick and minimalist to start with,” continues Hocking, but “then gradually shutters, canopies, buttresses and eyebrows were added back in as their taste developed through the entire project.” 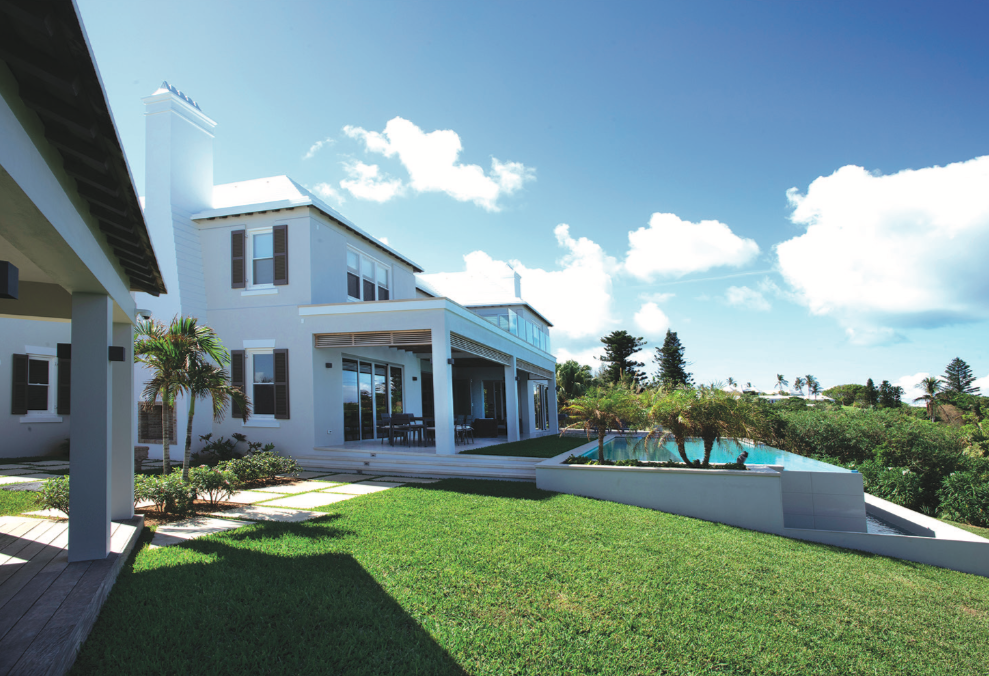 The pool and outside entertaining areas are on the more shaded, north side of the house so the team made sure to include features that maximised the natural light. While part of the outdoor patio area does have a solid roof, this is not maintained the full length; light wooden slats are utilised over part of it instead. “In this area we continued the line of the porch, but it’s not a defining ceiling,” he says.

No detail was too small for the owners, and one area of the outside Hocking says they “agonised over” was the pattern of the concrete pavers which go from the pool to the pool house—an area which also leads off to a built-in BBQ and hot tub.

“The owners and I traded sketches back and forth and we looked at all sorts of different ways we could not have a concrete pad out here, but have enough space so they could have some chairs in front of the BBQ or walk to the hot tub without going through the grass and also connecting the pool house, which was an original structure but it’s had some additions to it.” The result was large concrete paving slabs, which have been artistically positioned and each is surrounded by grass to soften them.

“They didn’t want a lot of concrete and tile everywhere,” says Hocking, “so where tile was practical, around the edge of the pool, we placed it. We softened it with wooden ceilings so it feels a little bit warmer and decks on that side for sunbathing and hanging out.”

The creativity of the outside entertaining and pool areas played a large part in the overall win for Greenlands. “The garden and pool area I loved,” says one judge. “The decking, the pergola, I liked the fact they were open and I guess that was an advantage of having them on the northern side of the building. The infinity pool was a very nice effect from the living room out to Castle Harbour.”

While the pool house and garage remained, renovations were done so their appearance was in keeping with the main house, and an additional bedroom was added to the pool cottage. “We changed what was one large room into two separate bedrooms and a bathroom and shower room,” says Hocking. They also made some simple, but effective adjustments such as trimming back and squaring off the previously round columns to match the patio of the main house.

These small details were not lost on the judges who described these renovations as “impressive” and “attractive.” With one adding that they “liked the openness of the cottage and the traditional design.”

For the interior design and soft furnishings inside the house, Jacob was supported by Lauren Grayston, senior interior designer at cTx Design Group. The general feel is artistic, from the “sculptural staircase,” corridor shelving and bathroom tile, to the large sliding doors, modern and light-coloured beams in the roof and the soffit lighting used in some of the living areas and master bathroom. 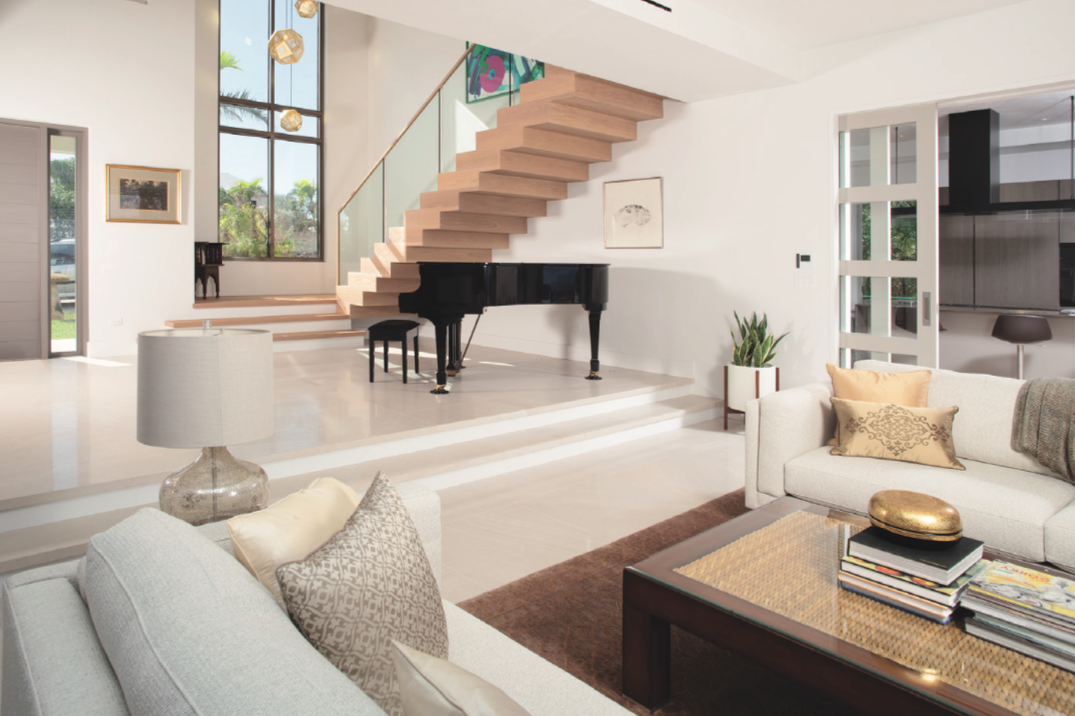 “When you walk in, it’s beautiful,” exclaims a judge. “Again, the view. When you have a huge view like that, it’s hard to go wrong. The stairs were pretty, the glass railing was pretty, the separation of master and guest bedroom suites creates individual space. That lofted area, so there was an openness still.”

“One of the things we started with was to take advantage of the scenery throughout the house,” says Hocking. “They wanted new space that flowed off the kitchen, which gave them more sitting space and looked like it was outside, and separate formal space.

“We liked the idea of doing something sculptural with the stairs so with the owners’ input, we decided on a floating stair,” he continues. At the top of these is an open and very light space, which again enjoys the phenomenal view over Castle Harbour, and which the owner is currently using as an office, but can be flexible depending on “which cycle of life” you’re in.

The master suite consists of three contemporary, but very comfortably styled rooms. The main bedroom on the north side leads through into a walk-in closet and on into the bathroom, which not only has serene lighting, but contains everything you could ever want in a bathroom including a free-standing bath tub, from which you can enjoy the television, an accent wall of floor-to-ceiling grey tile and a large walk-in shower cubicle. 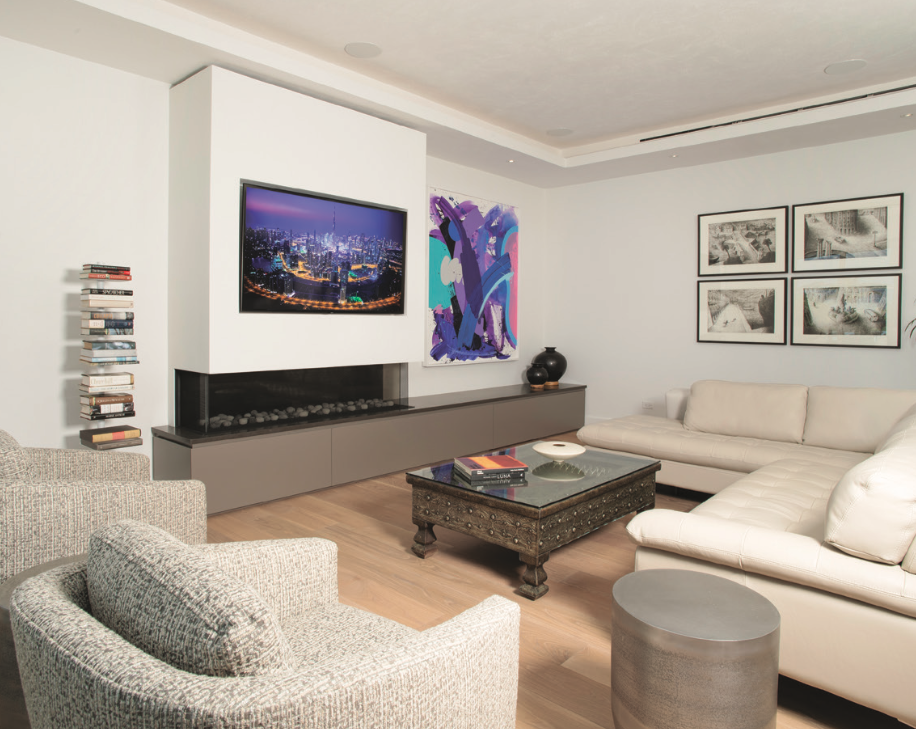 The owners of Greenlands enjoy entertaining and wanted to “be able to set different scenes for the house,” and also have flexible rooms that could be used for different purposes over time as they wanted. To achieve this, Hocking says they spent a lot of time with “indirect lighting on the house, so integrated into all of the shelving, underneath vanities, a lot of soffits, things like that. They wanted to pass through the house without having a lot of direct light.”

They also used bulkheads in the ceiling on the lower floor to create a more interesting aesthetic and permit the highest ceilings and largest volumes in the spaces. These bulkheads were then used to distribute air conditioning, plumbing and electrical throughout the rest of the house. 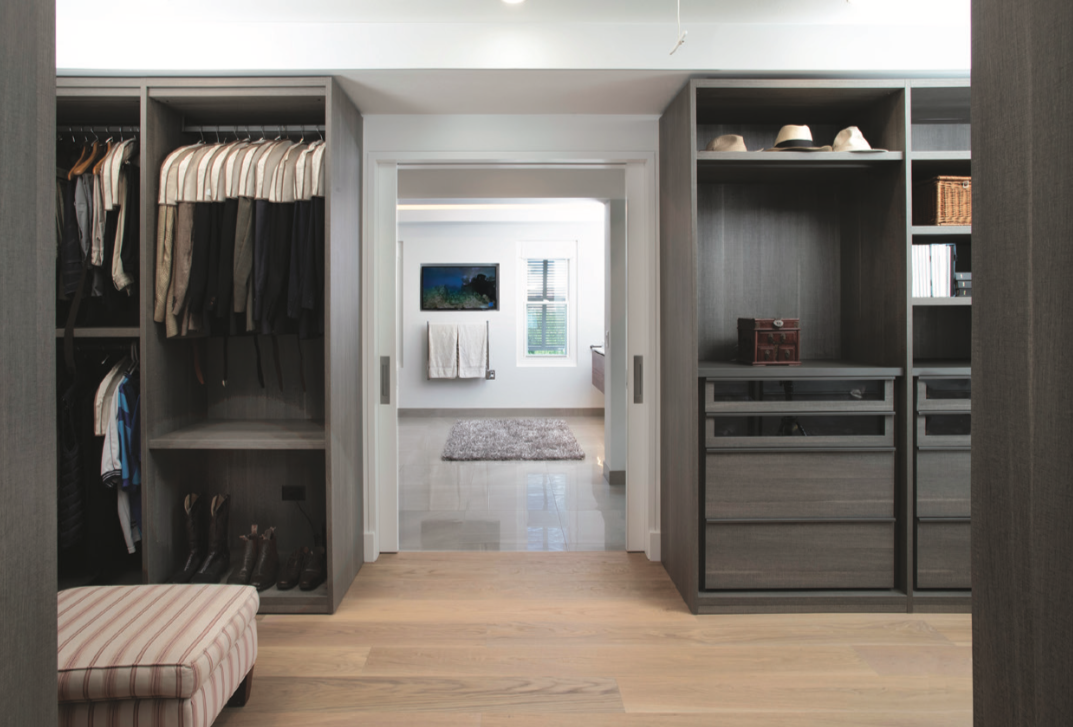 From the front, there are two entrances to the house. The more formal main entrance and then an informal entrance, which is conveniently close to the maintenance and utility areas of the house. Along the corridor linking the two entrance doors is shelving which houses personal mementoes—another example of small details making a huge difference. “These are things they’ve collected over time,” says Hocking. “It’s useful to have somewhere to put them on display so they don’t stay hidden in a box or attic somewhere.”

Off the central, sunken living room and separated by a huge and striking sliding door is a more formal living room, and on the other side, with a matching sliding door, is the kitchen, which gets a mass of natural light, from the sliding doors at the end. Instead of a formal dining room, the owners wanted to incorporate a large dining space into the kitchen. “This is the hub of it,” says Hocking. “The kitchen was a very important part of how this came together.” Behind the kitchen, with two doors leading out to it, is another built-in BBQ.

Our judges particularly liked the kitchen, especially the dark colour used for the countertop. “The fact that they didn’t have a dining room in such a big house, I loved that they wanted that incorporated into the kitchen,” says one. Overall, “it was a much more modern living space, having the two living rooms. One that engaged with the pool and the exterior. A summer living room and winter living room.” 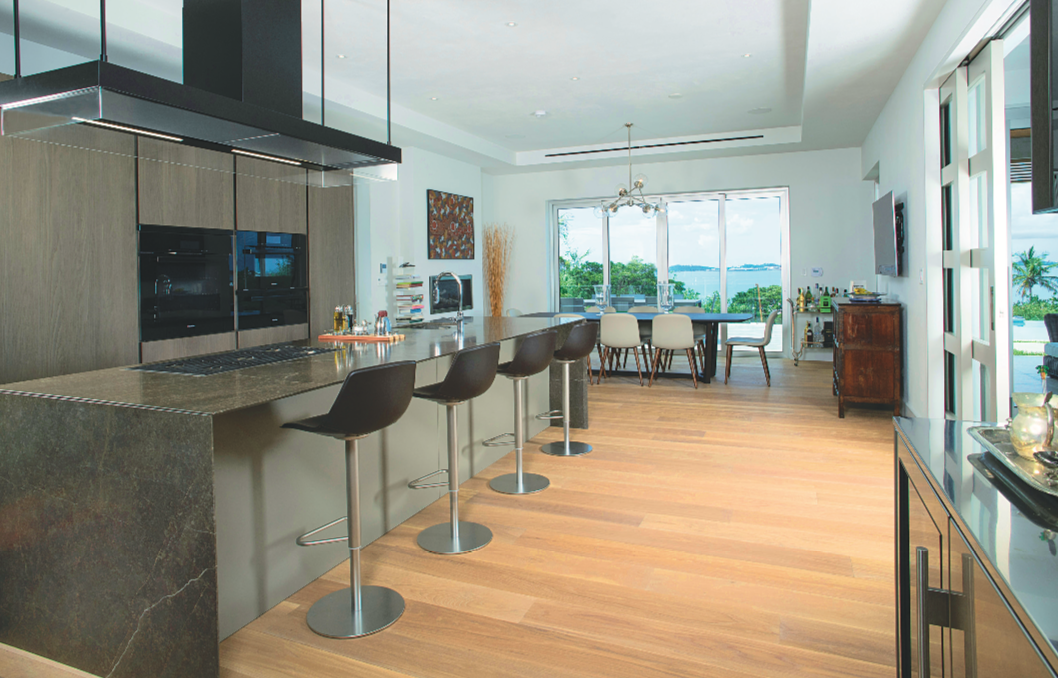 There was no doubt about it, agreed the judges. “From an overall building plus interior package, they did a great job and it was all very tied together,” says one. “The interior was lovely,” adds another. “The vista across Castle Harbour from the sunken living room was a very wow interior design.”