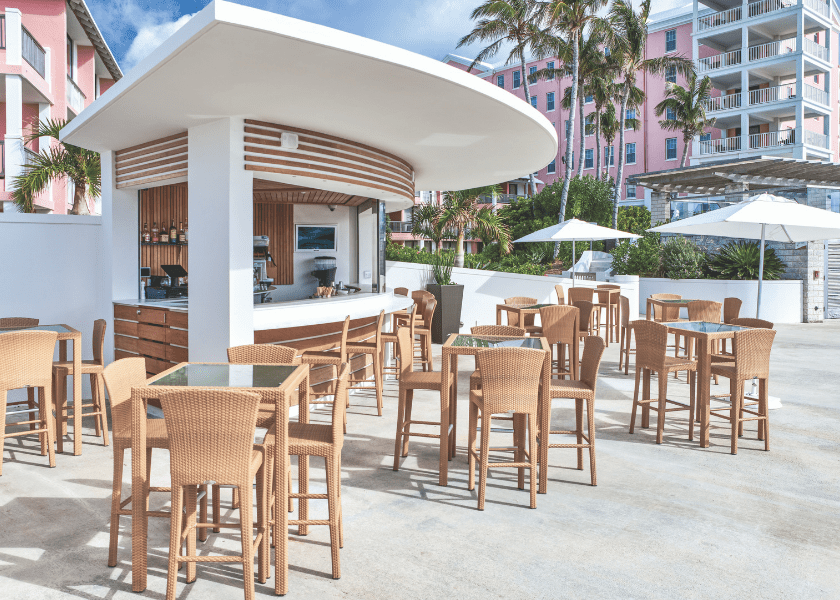 Marina Nights at the Hamilton Princess & Beach Club have become the place to be on Friday nights throughout the summer. Now they have a permanent home around the brand-new Marina Bar, which draws you in as you enjoy the walk along the water’s edge from the hotel’s main courtyard.

While the ambience surrounding the bar area may be serene, constructing an aesthetically pleasing, permanent modern structure, designed for noisy entertainment, on an impenetrable concrete slab situated in between water and luxury hotel rooms was not easy to achieve. Yet that’s exactly what the architects at Botelho Wood succeeded in doing, in impressive fashion.

“Where we built on is all above water. It’s a slab that’s sometimes three feet thick,” explains the firm’s partner, Germano Botelho. “We were building on a slab you can’t penetrate, so all the services go across the way and some of them underneath the walkway to connect back to 1609. The radio service, for example, is connected to 1609, although it’s all controlled from here.”

Prior to the construction of their new bar, hotel staff were having to set up and then take down a temporary bar area each time they hosted Marina Nights or other waterside events. This cost the hotel money and that, combined with the popularity of these events, cemented the decision to build something more permanent.

The new bar has been deliberately positioned to greet visitors, acting as a beacon at the end of a long and direct path from the hotel to the pool and the 1609 restaurant. The water-facing, rounded façade at the front is designed to fit in with the curved rest area on the existing ramp at the back of the bar. “Basically, we just nestled it right there,” continues Botelho. The structure is made from simple, plastered, reinforced concrete with sleek wooden pieces, which soften it. There is a stainless-steel bar in the middle of the front opening which is for the mechanical roller shades. “The idea is that after the night is done, these guys hit the button and walk away until the next day,” he says. “The lights are turned off and the roller shutters drop to secure the contents of the bar with the simple flip of a few switches.”

Behind the bar are the hotel rooms, so keeping all the noise to the front was important, as was making the back attractive so it didn’t ruin any views of the marina. To this end, because the bar backs onto a garden, they decided to plant vines. “The structure turns its softened, vine-covered back on the ramp and rooms for visual and noise privacy and opens itself to the ocean,” explains Botelho. 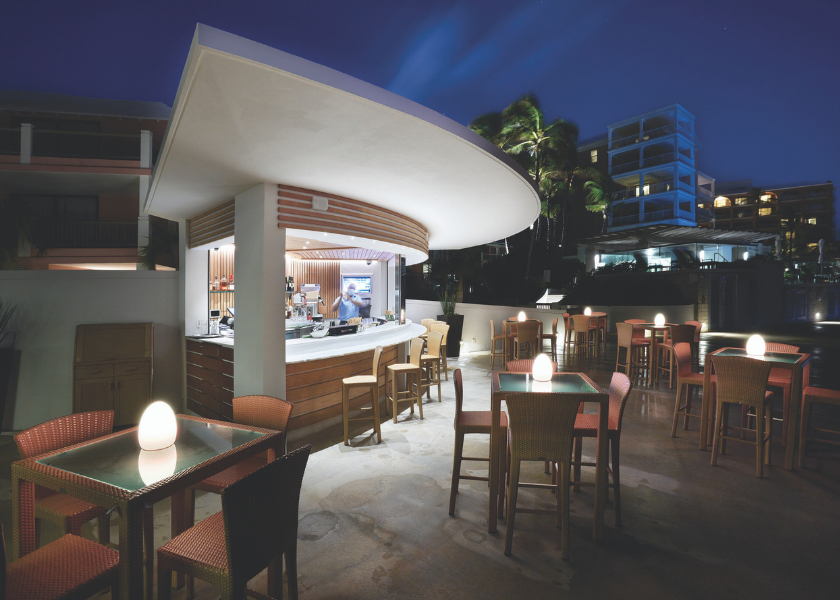 The clever design doesn’t just protect the hotel rooms from the noise, it also allows for a quieter seating area on the 1609 side. “From this side on, the noise drops off because the speakers are very directional,” he continues. “It becomes a bit quieter, so you can take your drink and walk over here.” There is therefore plenty of space to enjoy both the full bar and party experience as well as a social conversation with your friends, without having to shout into their ears. As an added bonus on the quieter side, while waiting for their drinking companions to arrive or during a break in the conversation, patrons can enjoy Julian Opie’s Beach Walkers. This contemporary mural depicts Opie’s signature simplistic figures in life size, in bronze, on a Turkish limestone surface.

Unlike the previous arrangement, the Marina Bar at the Hamilton Princess can now be used during the day as well as in the evenings and it was first put to the test during the yacht races, which took place last year. “We opened up and it worked really well,” says a pleased Botelho. During peak times, the new bar also takes some of the pressure off the hotel’s other bar areas. “Right now, the pool is being serviced by Crown & Anchor, and when it’s really hopping, this opens and both pools can be served from here,” he continues. Adding that this means “the ice hasn’t melted by the time you get there.”

The way in which Botelho Wood executed the design brief really impressed all the judges as well as the way in which they overcame the numerous logistical challenges. “It is simple, yet effective and I love that they pivoted the bar in a way that allowed for there to be quiet lounge space on one side, but loud noise, energy and vibe out the front,” says one.

“It is a very different look and feel. You have the light of the semicircle versus the hard lines of 1609 in the background,” adds another. 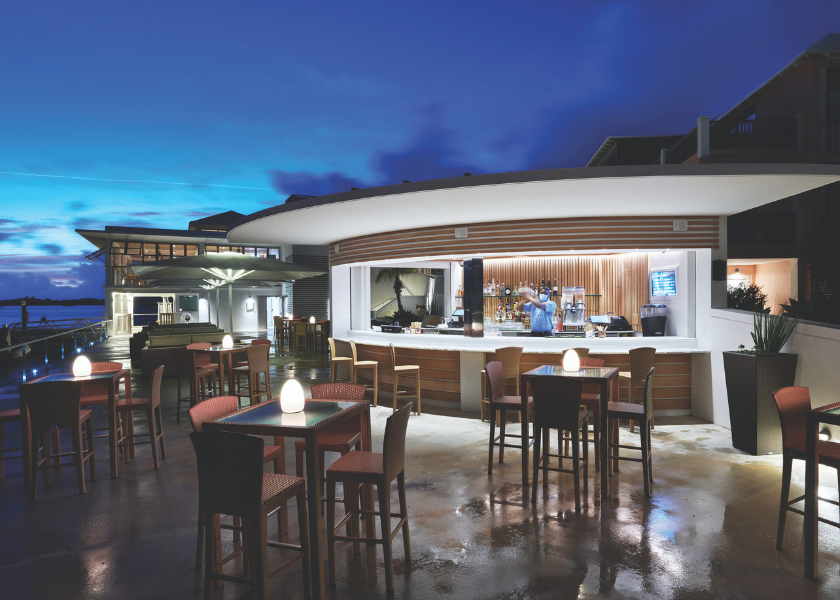 The consideration given to the back aesthetic and the view of the bar from the hotel rooms was also lauded and they are excited to see how beautiful it will be when the greenery starts to grow over the roof. Other novel features they enjoyed included the mirrored column for the shutters which they feel “helped it reconnect with the Marina,” and the stylish way the lighting has been designed for the darker hours. “Job well done for meeting the acoustic challenges with the rooms so close by and the technical side of the whole building on a slab you couldn’t get to. All the unseen stuff was very important,” they conclude.

One downside for the bartenders, however—there may be some late nights ahead as they struggle to move comfortable drinkers enjoying the boats, waters and peaceful ambiance of the Hamilton Princess marina.