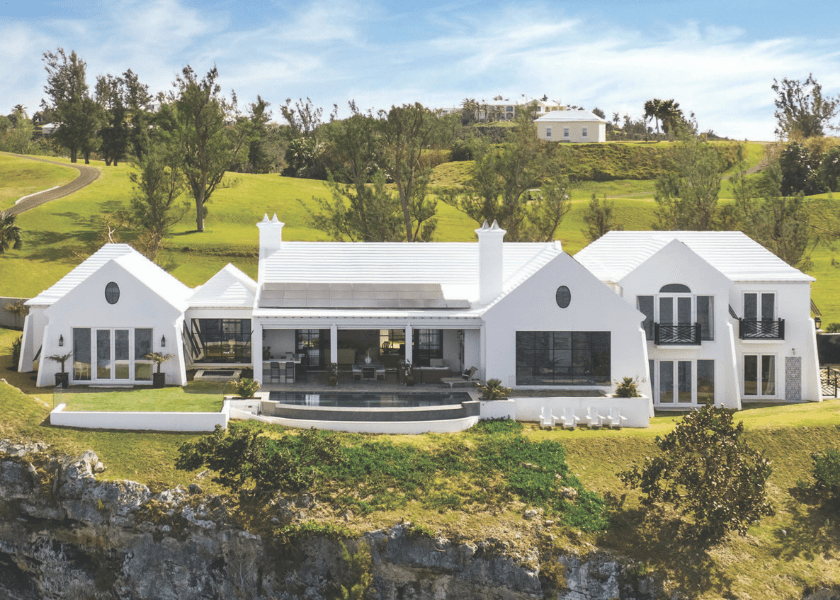 Southside is deceiving. Sandwiched between a road and the water, you imagine it to be narrow and somewhat noisy but from the minute you enter the property you are blown away by the breathtaking views, serene silence, environmental empathy and exceptional proportions of this large five-bedroom family home. 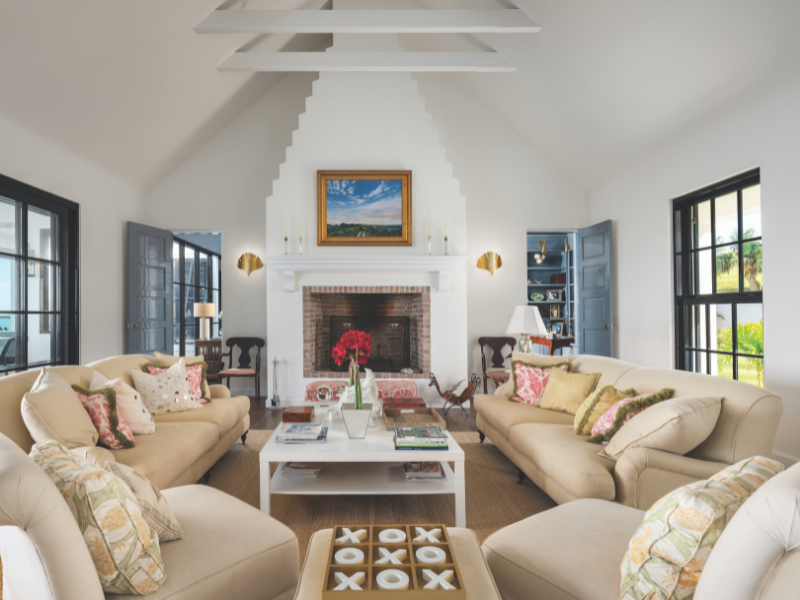 On walking into Southside, you are greeted by a large, bright, spacious, main room, which is an open-plan kitchen, dining room and sitting room; however, you could be forgiven for not, initially, noticing any of these essential constituents. This is because straight ahead of you is a panoramic view of Harrington Sound, enjoyed through huge, custom-made sliding doors, leading seamlessly out onto the back patio and horizon swimming pool. 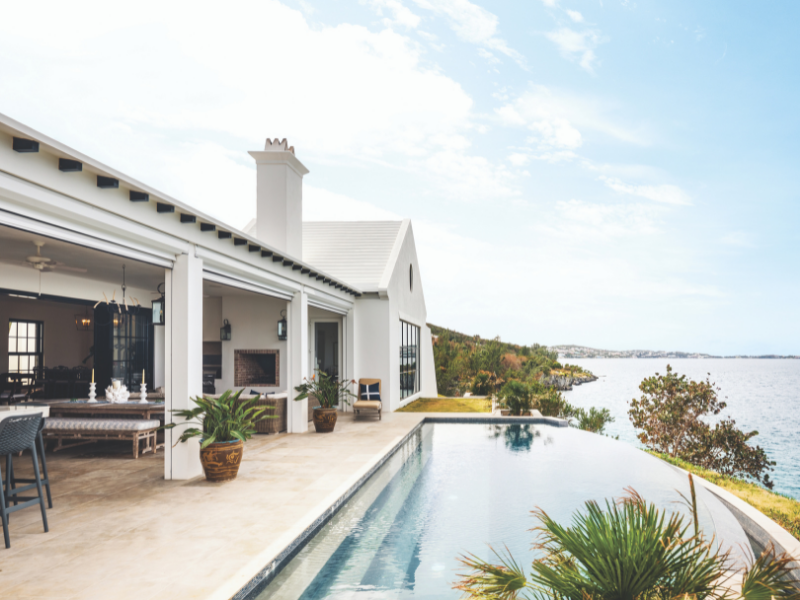 A particularly striking feature of this 4,700-square-foot property are the huge windows and doors which are square, wooden and painted in high-gloss black. This is a unique design for Bermuda, and architect Georgia Benevides drew a lot of her inspiration for them from trips to California. “I see that in California and I’ve always wanted to use it here,” she says. The owner had also been to Santa Barbara, which was how the pair came together on this design: “She liked the look of the steel windows,” explains Benevides. “In California they are mainly steel, so I copied that but used wood which is more conducive to our climate.” 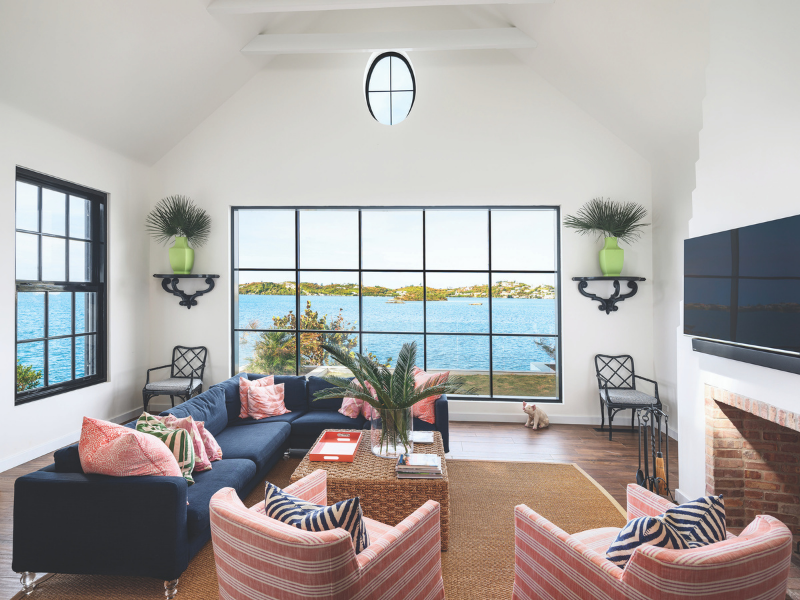 Other nods to this style include the high ceilings and exposed beams, and Benevides says she spent “a lot of time getting the proportion right, where the tray took off. I did a lot of drawings to make sure the square windows were exactly right.” The attention to detail throughout the whole house, especially in the main room, is exceptional. A traditional Bermudian stepped chimney above the fireplace at the living room end is mirrored above the range in the kitchen, opposite. This Bermudian charm bookends the room, anchoring the large space.

The tray ceilings are rounded at the corners, adding an elegance to the area and the air-conditioning is hidden under the floor. “The way I was doing the ceiling, I didn’t want to see the air-conditioning, so I pulled the tank in four feet either side, so I could run the duct work underneath and the vents are in the floor,” she explains. “I did a crawl space under most of the house. Everywhere except the kids’ rooms.”

The owners have four children and they each have their own room in the “kids’ wing,” which is designed over two floors at the west end of the house. The parents’ is ground floor only at the other end. Doors into the eastern wing take you through a compact office and on into the master suite. The office is a dramatic contrast to the main room. Although it has the matching floor-to-ceiling Santa Barbara-style window overlooking the water at one end and a more traditional window at the other, the room is painted in an unusually striking grey lacquer. After the openness of the rest of the house, it has a cosy feel to it, but there’s also a lot of natural light, enhanced by eye-catching and strategically placed light fixtures, which draw your attention to the beautiful items sitting on the shelves. 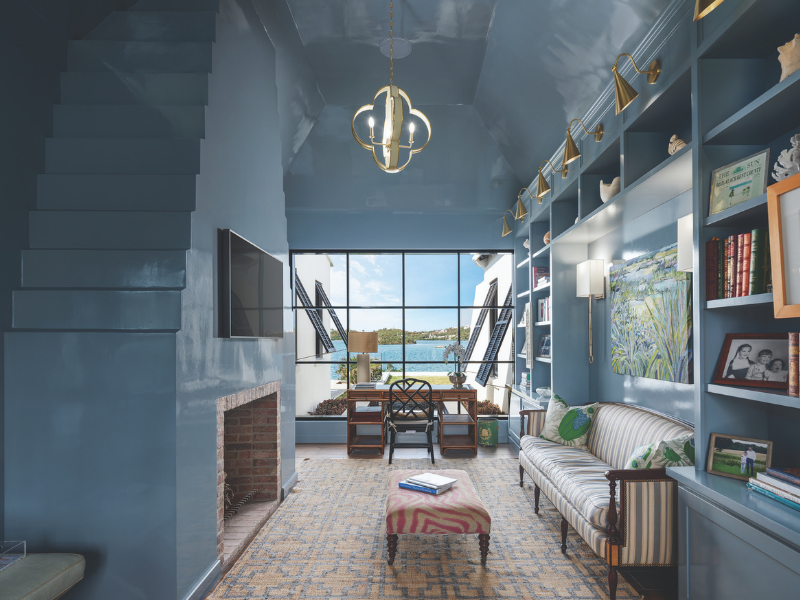 The master bedroom is light and bright, with doors leading out into the garden, and the closet system is a fashion-lover’s dream and includes custom cubbyholes for displaying shoes. At the other end of the house, on the water side of the kitchen, is a step down to a den, again with exceptional views, which leads up and down to the basement and the four children’s rooms. “What’s interesting about the children’s wing, and why the house is so successful from the outside, is because most of the house is just one storey but the children’s wing is split level, but not higher than the main part of the house,” says Benevides. “There is also a natural slope on the hillside. That’s why I did the split storey. That keeps the roofline the same as the roofline for the great main room.” Upstairs, they wanted to share a bathroom so it has been cleverly designed in a “jack and jill”- type style, which can be easily divided into two separate bathrooms should they change their minds later in life. 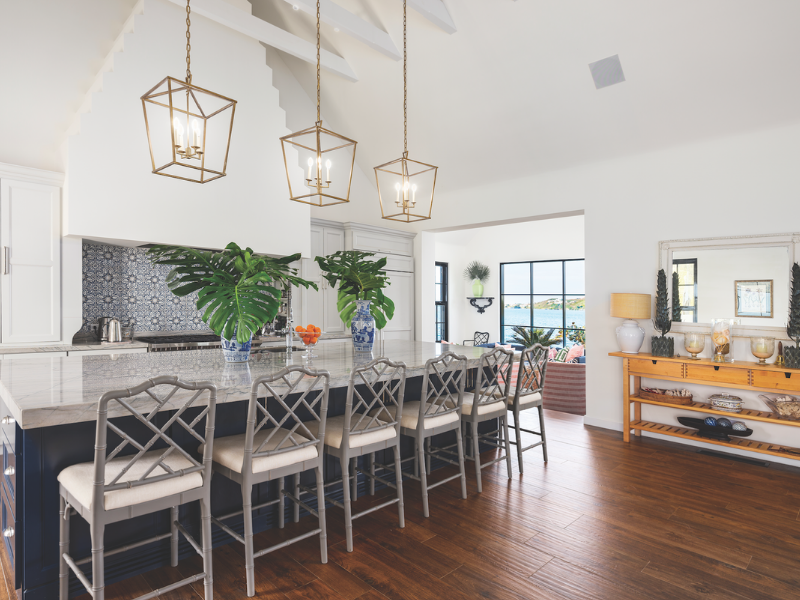 On the other side of the kitchen area, a small corridor leads to an inviting and boldly coloured bar area, and then on into the laundry room, which includes floor-to-ceiling glass-fronted storage cupboards. A “stable door” to the outside means it doubles up as a mudroom. Around the outside of the building, Benevides brought in a lot of traditional elements including buttresses “to bring old Bermuda in.” The gables, however, are deliberately simple in design to keep the style more contemporary, but all have elliptical windows, which the judges loved for their simplicity and elegance.

“My most important thing from the exterior was getting all the proportions of the different roof lines to complement each other,” says Benevides. “Also, with the right number of gables, not overshadowing the house.” On the roof are a number of solar panels, which fuel the entire house during daylight hours, including the swimming pool. To maintain the elegance of the rooftop, however, they are cleverly hidden away from sight on the flatter part of the roof which is over the back porch.

A six-foot-high wall protects Southside from the road and is layered, with a planter in front which is home to an attractive line of native olivewoods. “The goal was to make sure the wall blocked the road; when you’re in the house, you just see the golf course and it’s amazing how much of a sound buffer that wall is,” says Benevides. The entry port is also unique in that it has its own traditional looking, but oversized, shutters to protect the front door, which, because of the large square, predominantly glass, design is hard to cover up in a storm.

The owner and architect went to great lengths to ensure the outdoor living spaces fitted seamlessly with both the indoor living areas and surrounding environment, and the judges found this particularly impressive. Stone steps wind down to a wooden dock and the back patio flows out from the main room and includes its own bar, dining area, seating area and outdoor grill. The grill runs through the same chimney as the open fireplace. From the patio, you can walk effortlessly down into the pool, which, when viewed from that height, blends into the water of Harrington Sound. Hidden around the corner from the patio, but still looking out over the Sound, is a natural-looking hot tub, embedded into the grass and surrounding plants, giving it an almost water-feature type look. 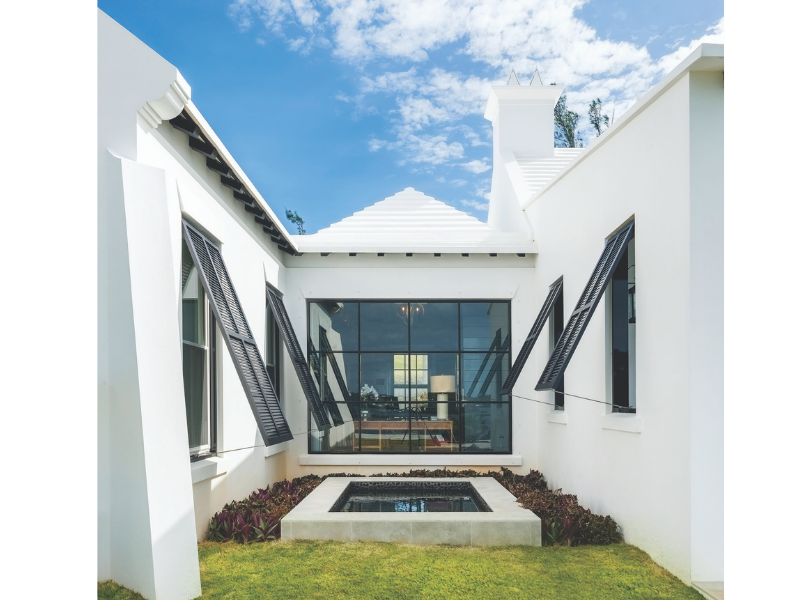 The plot location and coastal landscape made for considerable challenges when designing Southside, but, says Benevides, the owner had a vision and commitment to this property. The actual construction took two years, but before the design for the house could begin, they had to do a coastal environment and landscaping plan. “That was major,” she continues. “There were three caves. I had to design the house around the caves.” Two caves are over on the west of the property, what is now the parking area, and a third is on the eastern side, which is garden. “I had to avoid all three by 10 feet. Working around those areas was part of my design.” She also had to work around a prominent rock near the property’s entrance and move the parking area to the west of that.

In addition to the cave studies, Benevides hired a scuba diver to measure the undercut to make sure they didn’t build too close to the water, and they had to make a list of all the trees on the property. “In the coastal area we were allowed to remove Mexican peppers and casuarinas and replace them with natives and endemics, like bay grape, buttonwoods and cedar,” she adds. They also kept a Bursera tree, which now sits in a raised planter at the front of the house. They went to great lengths to be delicate with anything close to the water and added “longtail Igloos,” artificial nests for visiting longtails (white-tailed tropicbirds), around the coastal area.

“They had a lot of constraints they had to design around, and they did something that isn’t frequently done well,” agree the judges. “They created a Bermudian house, but gave it contemporary details. It still feels very present in Bermuda.” The judges also loved the fact the buttresses bring “a large house down to scale.”

The environmental challenges and the way Benevides overcame them was “impressive,” they continue. “I liked the rock,” adds one. “It reminds you of what they had to deal with.”

Click here to see the rest of our 2021 winners representing the best in Bermuda’s architecture and interior design!