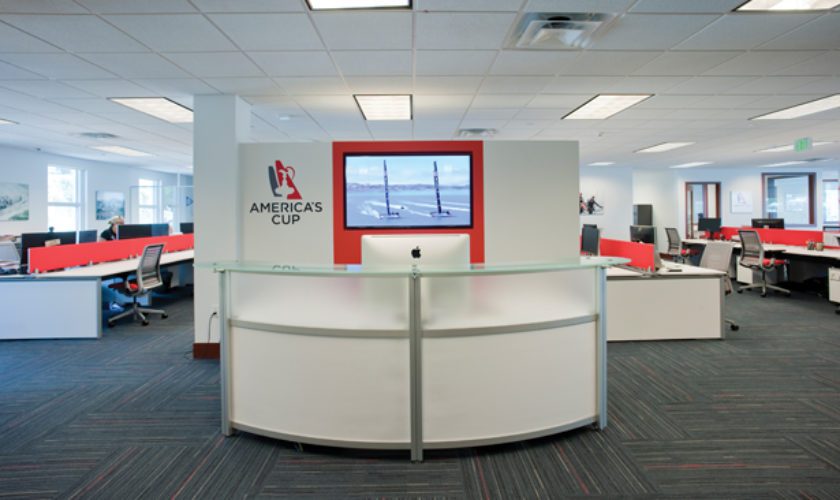 With all the excitement leading up to the 35th America’s Cup—including the first World Series event being held in the Great Sound in October—comes a large number of dedicated staff members working behind the scenes to make the events run smoothly. And when the America’s Cup Event Authority (ACEA) was gearing up to relocate to the island they turned to senior interior designers Emily Hopkin and Steve Lake at Linberg & Simmons to create their home base.

“We had to liaise with the client over e-mail and telephone as they were still in San Francisco closing up the operation there,” said Hopkin. “They were concerned about budget but wanted a clean and open concept that reflected the America’s Cup colours—red, charcoal and light grey. They had seen the Bermuda Tourism Authority office space, a previous client of ours, and like the contemporary feel.”

Looking for the ideal space that had sufficient room for 30-plus staff members and easy access to the water, the team found the perfect location at Windward Place on East Broadway last December and moved in at the end of March. “Windward Place offered the perfect open plan space and water access for the team,” said Hopkin. “They also negotiated an arrangement with RenRe as landlords which helped setting up their office quickly.”
Thankfully very little construction was needed in the 4,662-square-foot open plan office located on the top floor. With large glass walls overlooking the harbour on one side and already delineated spaces for offices, meeting rooms and a kitchen area the designers were able to focus their attention on the décor. “They wanted a clean and modern look that reflected the America’s cup image and was a good backdrop for all the sailing photos which cover the walls of the office,” said Hopkin.
Alongside the ACEA staff, space was also needed for the America’s Cup Bermuda (ACBDA) staff members located on the north end with a glass-walled office for sound separation. That, along with a reception feature wall, was the only new construction. Other areas created included a large open lounge area with a view of the harbour suited for quick informal meetings and casual functions and an Internet café for staff and visiting team members.
“After the original order of furniture was installed which included the desks, reception desk and lounge furniture, the client wanted to incorporate a casual meeting area where people could charge their iPhones and iPads and use the wireless to catch up on correspondence, “ explained Hopkin. “We ordered two counter-height meeting tables with power inserts. Having this elevated meeting space gives a new dynamic in the office and breaks up the rows of desks which are all at the same level. It also helps to define the space between the ACBDA staff and the America’s Cup Event Authority staff.”

With plenty of inspiration to draw from, the designers chose a bold and contemporary colour palette and selected materials and furnishings to create an exciting and energetic workspace. “We used a large format carpet tile (24”x48”) and laid it in a herringbone pattern to add some interest to the floor,” said Hopkin. “The dark blue colour with subtle grey and red stripes is a good base and contrast to the white, red and grey furniture. It also has a nautical feel. The chairs are simple ergonomic task chairs with red seats and grey mesh backs so they are not hefty pieces visually cluttering the space. It took some time finding a red fabric to match the America’s Cup Pantone red but once we did we used that fabric in all applications including task seating, kitchen seating and lounge furniture. The desks are a combination of white plastic laminate and silver metal accents with the AC red colour fabric on the privacy screens. The desk style is a ‘benching’ system where you share power and data through a trough and can easily collaborate with the people around you. It is a system that is suitable if you don’t require a lot of filing or personal storage space and saves on square footage.”
With Red Bull as a sponsor (and, yes, there is a Red Bull vending machine stocked at all times), this high-energy America’s Cup team now has the perfect space to call home and get all the necessary work done to create a spectacular series of events leading up to the main event in 2017.