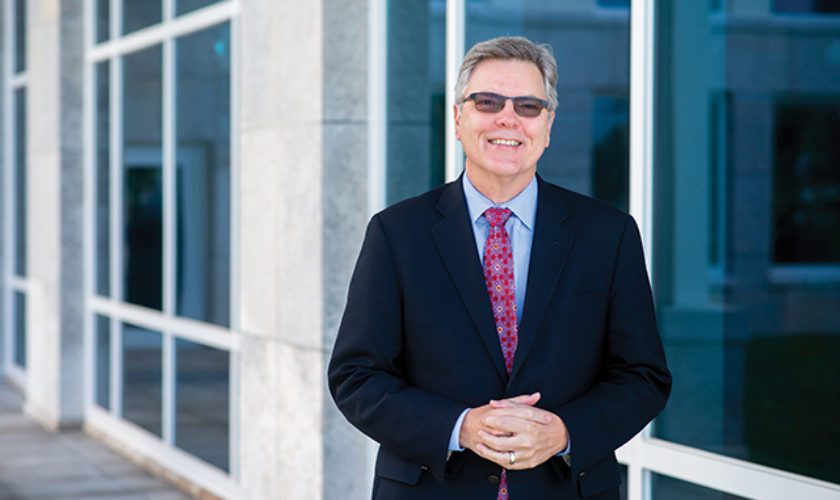 Growing up on a thousand-acre farm in southwest Iowa, Brad Kading came of age in the late ’60s and early ’70s, cutting his political teeth on the maelstrom of America’s civil-rights marches, urban riots, anti-war protests and Watergate hearings.

“Politics was the theme of the day and America was shifting—it was what we watched on TV, debated at school and talked about around the dinner table,” says the 61-year-old public-policy lobbyist, who saw his own family’s Republican views pivot left after his eldest brother, Bruce, narrowly escaped the Vietnam draft.

As President and Executive Director of the Association of Bermuda Insurers and Reinsurers (ABIR), Kading draws on his politically charged Mid-west background as advocacy point man—not only for Bermuda’s biggest industry, but also for the jurisdiction in general. Winner of the Bermuda Insurance Institute (BII) 2017 “Industry Leader of the Year Award,” he was instrumental in Bermuda’s successful multi-year campaign for Solvency 2 regulatory equivalence from the European Union, and is frequently called on to help address thorny reputational challenges. Notably, he is a respected voice of reason against “tax-haven” bad-mouthing by NGOs, rival domiciles’ backbiting, or blacklists that perennially threaten Bermuda’s top-tier corporate status.

“There is a perception outside Bermuda that it’s a jurisdiction which operates outside of norms of tax and regulatory standards,” he says, characteristically on-message even for an interview about himself. “Pictures of beaches and beautiful oceans make serious business look trivial. Bermuda has to be better than good on regulatory leadership, tax compliance and cooperation on international standards. It has to function ahead of the curve. And it can’t miss a beat by failing to deliver on compliance promises.”

Kading is based in Washington DC, where he has run an office for ABIR for nearly a dozen years. But most of his life is on the road; by his own reckoning, he’s nearing four million air miles and typically gives about 24 speeches a year. On any given day, he might be moderating an industry conference panel in Singapore, addressing EU regulators in Brussels, tweeting Capitol Hill headlines to stakeholders, cajoling members of Congress or briefing policymakers in Bermuda’s Cabinet Office. He spends an average of a week every month based out of ABIR’s local headquarters in O’Hara House, Hamilton.

“Bermuda has never been the domicile of choice for multinationals that want to park profits in an opaque fashion,” he says, folding his six-foot-three frame into an office chair overlooking Bermudiana Road’s power lunches. “We’re not Panama. We’re not the Bahamas. We’re not the BVIs with more than 500,000 incorporations. This is not the place you would go to if you wanted to hide money. This is the place you’d go because you wanted to put money to work taking on insurance risk. That’s what makes Bermuda unique; it’s different. But its success is dependent on being able to articulate that message to policymakers in Europe, the US, and the G20.”

Representing the interests of ABIR’s 22 member companies has neatly complemented the wider sphere of Bermudian external affairs. The island’s world-class regulatory status is a key reason a third of the industry’s top 40 leading reinsurance carriers are based here. In turn, Bermuda draws heavily on the sector’s critical role after the world’s worst disasters. Bermuda-based property and casualty re/insurers, including ABIR members, make a massive global contribution. According to ABIR statistics, they paid nearly a tenth of 9/11 claims, a hefty $22 billion to rebuild the US Gulf Coast after Hurricanes Katrina, Rita and Wilma, more than a third of Alberta’s wildfire losses, and over half of New Zealand’s 2010–11 earthquake liabilities.

The public-relations benefits are mutual and Kading has encompassed both causes with ease, his unruffled demeanour, blunt assessments and dry wit making him an equally welcome fixture in boardrooms and government gatherings. Jeremy Cox, Chief Executive Officer of the Bermuda Monetary Authority (BMA), lauds him as “pragmatic, tenacious and always strategic—a tireless advocate.

“He is clearly no stranger to life in the hot seat,” observes Cox, who worked closely with Kading on the push for Solvency 2, “and demonstrates an impressive combination of negotiating and leadership skills as head of an organisation whose members play a vital role in the economy of Bermuda.”

Industry colleagues agree. “Brad’s hallmark integrity, deft touch, candour, and collaborative nature have made him ideal to lead these efforts,” says RenaissanceRe general counsel Stephen Weinstein, who recruited Kading by phone for the ABIR role in 2005. Kading was travelling at the time and remembers taking the call inside a Montgomery, Alabama, Steak ’n Shake.

Born in Adair County (pop. 7,600) in 1956 to a family of German heritage, Kading was raised on a corn and soybean farm, the youngest of three boys instilled with a firm work ethic. Childhood chores from age 12 included long days pulling up thistles, baling hay and feeding cattle. The region was immersed in political legend: Adair County happened to be the birthplace of Roosevelt vice-president Henry Wallace, a champion of New Deal liberalism, and the Speaker of Iowa’s House of Representatives, Andrew Varley, was a Kading neighbour and family friend. At 16, Kading took part in his first campaign, driving a car in Varley’s parade.

With Woodward and Bernstein making headlines, Kading found himself drawn to journalism, satisfying his acute penchant for detail, which he retains. After high-school stints at the Stuart Herald and Adair County Free Press, he completed a double-major degree in journalism and political science at Drake University, Des Moines, and was hired as a business and labour reporter for the Waterloo Daily Courier. “I was paid $9,600 a year,” he says. “I’d go to the YWCA for a sandwich, and have a piece of coconut cream pie, some potato chips, tuna salad, and a Coke—for $1.75.”

Convinced he couldn’t make a living as a writer, he turned to politics as Speaker Dale Cochran’s chief of staff and later served as press secretary for the state House Democrats. In 1981, he followed his college girlfriend, a speechwriter, to Chicago and got a job at the Alliance of American Insurers (AAI). The couple married, and he spent the next 10 years as a lobbyist for the property-casualty coalition.

“That’s what got me into insurance,” says Kading, who endured a “baptism by fire” during the liability industry’s capacity crisis that concurrently led to the revolutionary formation of ACE and XL in mid-’80s Bermuda.

By the time he got to the US capital in 1991, Kading was defending reinsurers as Director of State Relations for the Reinsurance Association of America (RAA), a role that saw him managing programmes tied to legislation and regulation in the US, while the industry made increasing inroads to the Bermuda market. When ABIR reached out to him in 2005, it felt like a natural move. The nascent organisation had an important role to play at a time when yet another wave of “big-cat” companies was hitting the island, attracting billions of post-Katrina capital.

Kading immediately set to work, ramping up ABIR’s profile—but not without considerable pushback. “ABIR was a four-letter word for a while,” he quips. “We were working to engage industry on international standards, trying to get them to recognise there was going to be more regulation, and we had to be ready for it. Bermuda had been a lightly regulated domicile, but times were changing.”

ABIR rallied opini
on leaders, gathered industry consensus, and then supported the BMA in what amounted to a wholesale rewrite of the island’s regulatory framework. Kading calls the BMA’s pursuit of Solvency 2 status “a gutsy move,” but industry opponents lambasted it as expensive and unnecessary. That school of thought had changed by 2016 when only Bermuda and Switzerland were approved under the regime, opening vital access to European markets and cross-border trade. The previous year, Bermuda won similar kudos on the other side of the Atlantic, achieving qualified-jurisdiction status from the US National Association of Insurance Commissioners (NAIC).

“I have seen his ability to champion the industry and keep pace with its growth and constant development,” comments Cox. “That is a significant achievement in such a rapidly evolving marketplace.”

The 2000s brought fresh challenges in the form of efforts by US Democrats to levy affiliate reinsurance tax against foreign-based re/insurance companies, including those in Bermuda. “We had to organise strategically to defend ourselves,” says Kading, “and we did that by lining up solid economic research stating our case and communicating the cost to American consumers in the markets affected. We built allies in Europe, with captive insurers, with the Risk & Insurance Management Society (RIMS), and created a coalition to take on the broader issue of border adjustment tax.”

ABIR criticised the attempts as harmful protectionist measures, and studies found such legislation would cut the supply of insurance in the US by 20 percent, curbing diversification and driving up prices for consumers and businesses. Proposed bills and eleventh-hour amendments were deterred throughout the last 10 years, yet new threats loom, including possible targeting by tax-reform ambitions of Congress and the Trump administration.

“Brad has been a major contributor to the Bermuda reinsurance market’s success since assuming leadership of ABIR in 2005,” says ABIR Chair and RenaissanceRe President and CEO, Kevin O’Donnell. “He has helped us navigate through political and regulatory challenges worldwide, and build Bermuda’s brand as a world-class jurisdiction that meets or exceeds the highest standards of oversight, cooperation and transparency.”

Kading’s career trajectory underscores the mentoring message he gave to BII students earlier this year in a presentation titled “Defining Bermuda & Yourself for Success.” In it, he walked them through the reasons why the island is the “World’s Risk Capital” and called on them to “connect the dots. Education is a life-long project and success is cumulative,” he noted. “Understand how knowledge you have links to something else.”

It’s a tenet his colleagues see him put into daily practice. “Brad’s background in journalism makes him the perfect investigative advocate—he’s tenacious at getting all the facts and then creating the story that best presents the case. He doesn’t give up,” notes Leila Madeiros, who was a Bermuda-based ABIR colleague from the start. “His understated demeanour should not be mistaken for complacency,” she adds. “He always carries a folded piece of paper in his coat pocket which he doesn’t hesitate to pull out at meetings to scribble down just one more thing or two to his list of to-dos.”

So what lies ahead at this point for Kading? More travel, for starters, including a bucket-list trip he and his wife, Kim Ross—a fellow inveterate globetrotter—have planned to New Zealand in early 2018. Having seen every US state, 17 EU countries, most of South America and parts of southern Africa, he considers himself “deficient in Southeast Asia”—specifically, Thailand, Myanmar, India and Sri Lanka.

When he’s not logging air miles for ABIR, Kading also likes to spend time relaxing at the couple’s beachfront home in the Turks & Caicos, visiting the 300 acres of farmland he still keeps in Iowa, catching up on murder mysteries and John Irving novels, or walking his 13-year-old rescue poodle mix, Fozzie.

But not without looking ahead. Perpetual challenges to jurisdictional reputation, reinsurance’s continued soft market, the possibilities of insurtech, tax threats, compliance hurdles, and political risks here and abroad are ever on his mind.

“I think there’s a growing recognition that Bermuda is different,” he says, “but if you look at the long haul of time, we still have a way to go.”