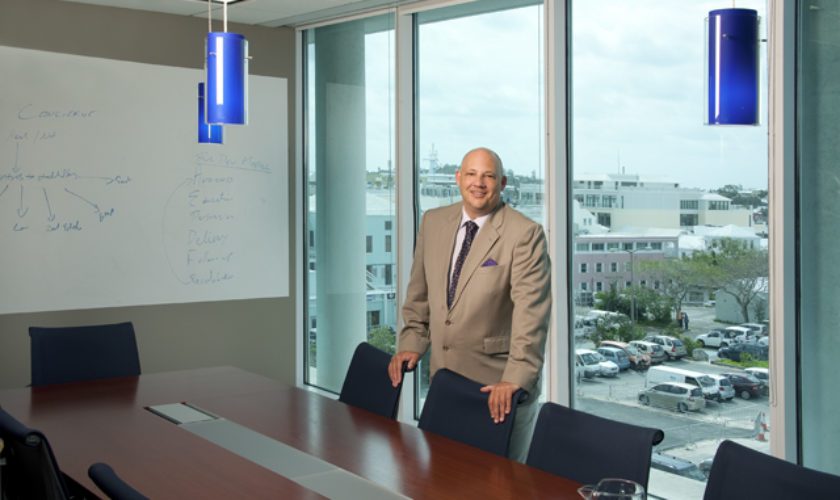 Back in the late 1940s and ’50s, Bank of Bermuda general manager Henry “Jack” Tucker embarked on pilgrimages to New York, Toronto, Montreal, London and European capitals in a pioneering bid to put Bermuda on the financial map. His targeted roadshows, often in the company of his cousin, lawyer James Pearman, were instrumental in spreading the word to the corporate elite about Bermuda’s tax advantages, stable politics, developed infrastructure, idyllic beauty and pleasant lifestyle. His efforts attracted a wave of exempt companies, trusts and other foreign investors. Tucker, who later became Bermuda’s first premier and was awarded a knighthood, is now considered one of the early fathers of the  island’s international business sector.More than 60 years later, that same brand of enterprising business development is the calling card of Ross Webber, hired last summer to help re-energise the  island’s economy as    chief executive officer of the Bermuda Business Development Agency (BDA). The public-private partnership, funded by both government and the corporate sector, leads the charge to support existing Bermuda-based companies and attract new ones to the jurisdiction. Its overall mandate? To increase GDP and help companies maintain and grow jobs opportunities on the  island.

As a former permanent secretary of  government’s Economic Development Ministry, and a marketing and business development veteran of private-sector corporations such as ACE, AIG and Conyers Dill & Pearman, Webber knows a thing or two about what it takes to convince blue-chip companies to play in your sandbox. But while the stakes are high and his work is clearly cut out for him, the indefatigable 47-year-old Bermudian is confident the  island has all the right ingredients to make a robust comeback after recent recessionary years.

“What makes Bermuda particularly unique among jurisdictions is that we offer world-class services across several separate sectors of our economy including tourism, insurance, asset management, and trust and private-client business,” he enthuses. “We have a strong history, and proven track record, in all those industries, with mature markets that continue to thrive. Bermuda is one of the top three reinsurance and insurance centres, one of the top three in offshore funds, among the top two in offshore trusts and private-client services, and number one in offshore captive insurance. That’s an impressive record, and something we continue to build on with the partnership of our colleagues.

Since he hit the ground running last August, Webber has pushed that collaborative message, teaming with government, regulators, and industry focus groups created by the BDA to cover key sectors. He has held scores of meetings with key executives, along with frequent powwows with the Bermuda Monetary Authority (BMA) and industry associations such as ABIR, ABIC and BIMA.

“We’ve made the BDA the most collaborative iteration of this type of agency this country’s ever seen,” he says. “We keep our stakeholders in the loop. That is very important to us to make sure we are coordinated and communicative and not working in a silo.”

Webber has led numerous roadshows to New York, London, New Orleans, Toronto, Calgary and Silicon Valley in the past several months, connecting with potential new business and looking for ways to diversify the  island’s economy. “An area of possible growth for Bermuda is what we term ‘international commerce,’” he explains. “Sectors such as technology, biomed, life sciences, international arbitration, venture capital, shipping and aircraft, cloud computing—these are all dynamic industries we’re actively looking at.”

He has built a committed team of a dozen Bermudian employees, finessing the BDA brand and billboarding its mission through its website (www.bda.bm) and community and social media outreach, along with an aggressive strategic plan for 2015–16 and beyond. One new initiative called “BDA Abroad” connects Bermudians and past Bermuda residents around the world—“our global corporate ambassadors,” says Webber of the LinkedIn Group, which has close to 200 members from Singapore to Switzerland.

“I encourage Bermudians both on the  island and overseas to spread the word and be positive about the jurisdiction,” he says. “Let people know Bermuda is a very welcoming and vibrant society for business and visitors in general. We, as an agency, are a resource to help; our goal is to make setting up a Bermuda presence easy.” Notably, the BDA has a dedicated business concierge service which partners with inquiring companies, helping them through the setup process, as well as trouble-shooting for already established entities.

Genuine business development can take time for fruition. “It is a longtail process and the real issue is getting the right people in front of the right people for a proper honest discussion,” Webber recognises. “You plant a seed, you water it, you pay attention—and then you nurture it. It is very rare to get immediate hits when you’re implementing a jurisdictional marketing campaign.”

Yet, as his predecessor Jack Tucker must have experienced, pure serendipity often plays a part. Webber cites the example of an asset management firm that decided to explore relocation to Bermuda. “They reached out to us after someone happened to see a press release we issued about recent changes to Bermuda’s investment funds legislation,” he says. “We followed it up, gave them personal attention, and after a while, they were advertising jobs in the local paper, ready to start up.”

Counting a robust sense of humour and sharp intuition among his strong suits, Webber, a former Bermuda national rugby fly-half, is nothing if not passionate about pretty much everything he sets his mind to. His professional background is a natural match for his challenges as CEO. Born on the  island, he moved to the UK at age five with his teacher parents, returning in 1994 with an English wife and a  bachelor of  arts (honours) degree in  business studies from Teesside University with a major in  marketing. He first worked at ACE and AIG as both an excess liability underwriter and marketing executive, while also completing an MBA in  insurance and financial risk management from St. John’s University, New York. He then spent a year at BDA’s forerunner, BIBA, before joining Conyers as global head of marketing. In mid-2012, he took on the senior civil-service post and oversaw a portfolio with divisions as diverse as registrar of companies, business development unit, tourism, education, energy, shipping, aircraft and telecommunications.

“I’m honest. When I speak, people know what my real thoughts are,” he says. “I invite the same back. Part of that spirit is what’s helped us become collaborative and communicative with our stakeholders and industry partners. I’m candid. I believe that ultimately facilitates more productive discussions. Everyone doesn’t always agree—but people know debates, negotiations and arguments with me come from a place of trying to move Bermuda to a better situation.”

Moving Bermuda forward is something he has a personal stake in, after all. Living “dahn Cut” (Cut Road, St. George’s) with his wife Sarah, a teacher at Warwick Academy, and their two children, Alys, 14, and Jack, 13, Webber—a devout Liverpool FC fan who is partial to trivia quizzes, AC/DC and Nabokov novels in his rare free time—reckons he has as much to lose or gain as every other  islander.

“I am Bermudian. I have a mortgage. I have Bermudian children,” he says simply, “and I want them to live in a prosperous, welcoming, thriving en
vironment here. At the BDA, that’s what we’re all about.”