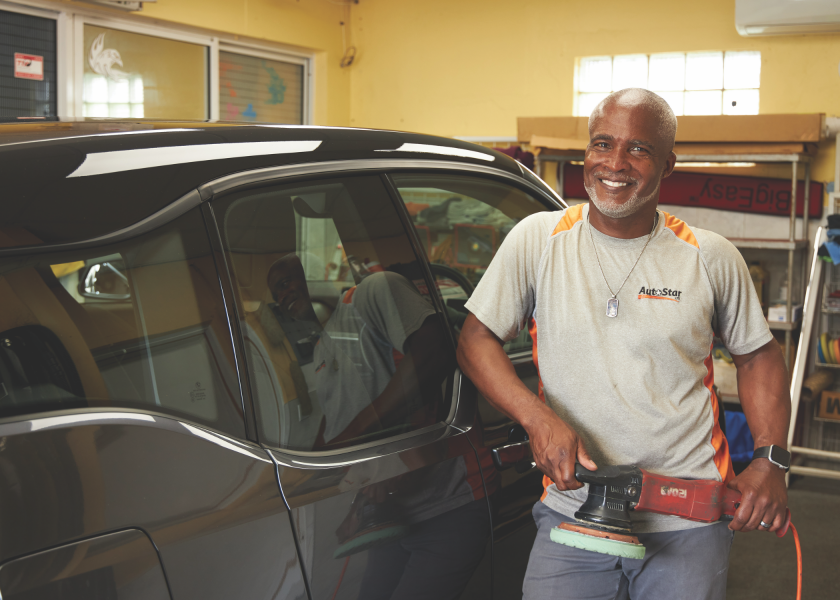 AutoStar: 24 Years of Attention to Detail

AutoStar has earned a reputation for excellence in window tinting and car detailing. The guiding philosophy of its founder and owner, Clevie Simmons, is to “look after the customer and the customer will look after us.” The success of that approach is evident as the business that Simmons started in the garage of his Warwick home in June 1997 celebrates its 24th anniversary this summer.

From its beginnings as a window-tinting specialist, the business has added to its repertoire over the years. Today, AutoStar also offers a full suite of detailing services, including paint protection, paint correction and full car interior steam cleaning, as well as wheel and tire services and commercial and residential window film application.

Despite evidence to the contrary, Simmons does not consider himself a natural entrepreneur. Since learning how to tint vehicle windows as an 18-year-old—his mother’s new car was the first he did—it became a sideline, a job he would do for friends. But he did not initially see it as a potential business. After he left his job at the Royal Bermuda Regiment in the late 1990s, he applied to become a firefighter. While waiting for a response from the Bermuda Fire Service, Simmons started tinting vehicle windows for customers to “keep some money coming in.” After several months, business was so brisk that when the Bermuda Fire Service offered him a job, he declined in favour of taking his budding enterprise further. Customers appreciated the quality of Simmons’s work, including a major island automobile distributor, which asked him to prepare all of its new vehicles for customers. The business outgrew his garage and in April 2003, he relocated AutoStar to its current home on St John’s Road, Pembroke.

His mother, Naomi Simmons, has been a part of the business for more than 15 years, assuming front-desk and bookkeeping responsibilities, while Alberto Nito has been an AutoStar employee for the past 13 years. Like many other small business owners in Bermuda, Simmons wears many hats – from finance manager, to marketing director, to worker. In addition, the business has over-come challenges associated with the recession, the loss of staff and most recently, the pandemic. Reflecting on these challenges, Simmons recalls his 19 years of service in the Bermuda Regiment and explains that two of the many qualities obtained during that time and that served him well were perseverance and excellence. He believes that both have helped to make his business successful. “In window tinting, something as small as the wing of a fly can stick out like a sore thumb, so high standards are important.”

Mr. Simmons has also worked hard over the years to give back to the community. In addition to volunteering as a mentor with the Mirrors Program, AutoStar has offered community education classes for teenaged boys, offered day release classes for senior school students and provided part-time employment for at-risk boys through Child Adolescent Services.

Professional development is important to Simmons: He has invested in overseas training over the years including completing car detailing courses with I-CAR and industry leaders Meguiar’s and Glossit, earned a film application certification from 3M and qualifying internationally as a tire service instructor with the Tire Industry Association. “This overseas training has allowed me to refine my skills and to offer the public a high level of expertise,” he says.

Maintaining excellent customer service is the key to enabling AutoStar to continue to thrive. “I’ve never let money be the driving force,” he says. “It’s about always trying our best to do a professional job for the customers, the money will take care of itself.”