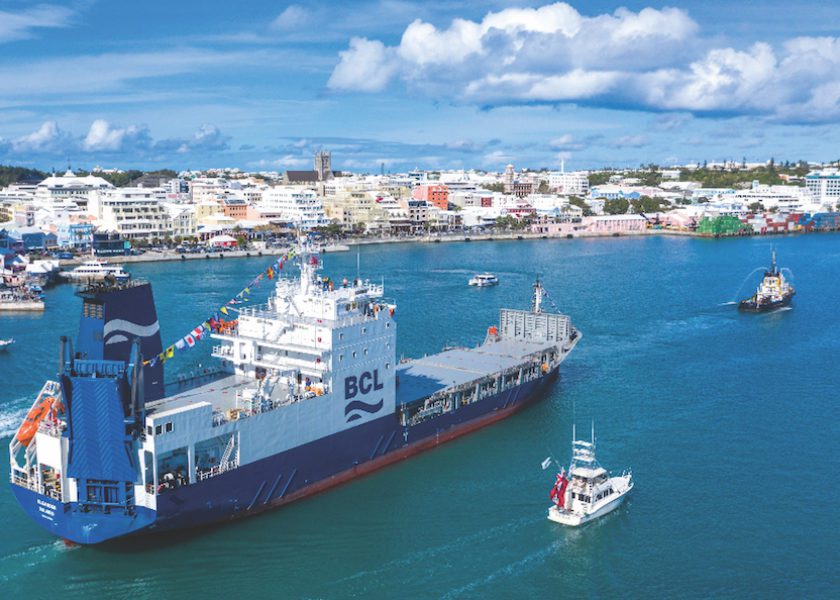 This summer, Bermuda Container Lines christened a new ship long in the making—the MV Oleander. The ship is the third of its name in the history of BCL, but the first to be custom-built from the ground up, bespoke for Bermuda’s economic needs. At an impressive 393 feet long, she is one metre longer than the old Oleander. But what she lacks in length she makes up for in girth, and is now capable of taking 450 containers—about a third more than previously.

This June on Front Street near the Ferry Terminal, the new MV Oleander was christened with all the pomp and circumstance we Bermudians have become known for when it comes to our ships. There were men in suits, two prominent business women as godmothers, the town crier and, of course, the rum.

The Bermudian used this as an opportunity to talk with BCL president and CEO Barry Brewer to discuss the history of the Oleander and her predecessors, shipping in Bermuda, and what launching this new, gleaming vessel means for all involved—including Bermuda.

Could you give us an overview of your career with BCL?
Sure. I came back from college in New England, doing business, graduated, and I get a call from my dad. He says, “Look, we’re starting a shipping company. Would you come back and help with the marketing?”

This was when?
It was 1980. He said, “I know you always said you’d never take a job from your dad, but I do need your help.” So I came back, and it was a true start-up. I mean, as difficult as you’ve ever had. Multiple competitors over multiple years, millions of dollars of losses…it was tough. So I came back to help with the marketing—I spent 15 years there and then I went to work at XL for 13 years, RenRe for two years, OIL for three, and then I got out and came back to run the company.

What are your responsibilities now, running the company day-to-day?
As president and CEO I have a responsibility to make sure that we have a good vessel, we’re on time, we’re on schedule, that we take care of our customers.

What does that look like tangibly, in your day-to-day activities?
We do a lot of modelling. I have a tremendous CFO and what we introduced when I came back was an awful lot of financial modelling. Things like changes in fuel prices—what are the effects going to be on the company?—reserving dollars for replacement of the old ship—I think that’s been the big change since I came back six years ago.

So let’s get into BCL. How did the company get started?
I’ll actually go a little further back if you don’t mind, because it’s kind of a cool story. So I’m a Bailey’s Bay Darrell. In fact, on both sides of my family we go all the way back to Carter, who’s the first guy [in our family] to come Bermuda. My wife’s an Outerbridge, I’m a Darrell. So we go all the way back. The Darrells owned a house above Holy Trinity in Bailey’s Bay. Mount Windham was a location where you could see 360 degrees around Bermuda. And because of that, you could see sails on the horizon. So as the story goes, the Darrell family got into shipping because of that advantage. The way that this guy drove his carriage—he’d race down to St. George’s, get in the gig, row out there, and hopefully be first to secure the agency for shipping. So that’s where we started, before there was engines, you know. No motors. These sailing ships would come in and things would need to be repaired. So there was a machine shop in St. George’s, and that grew into an agency business which got into cruise ships and other stuff, and essentially what happened was…we were an agent for a Dutch company that was providing small feeder services back and forth. And my father one day went to Fernance Perry and other importers and said, “Guys, this is crazy. We don’t have any transparency on the pricing, we don’t have any control on the pricing, and we’re at the whim of whoever it is that’s running the company. This should be a Bermuda company.” So they went out, they raised the capital, and we started Bermuda Container Lines in ’79. In the interim, my father, who was a very quiet man but a real innovator, he introduced containerisation to Bermuda at a time when there were literally hundreds of guys who worked on the docks. There were four separate stevedoring companies, and we had to get all four of them together, pool their resources to pay for these expensive cranes, and spreader bars, and top-loaders, and all the things that make containerisation work, and also work with the guys on the dock to say, “Look, this is the future. This is what we need to do.”

What did the unloading process look like before containerisation?
This is the fourth ship named Oleander, but the second one that we’ve built. There was the Oleander, the Poinciana, and the Hibiscus. They were small, costal vessels, and they used to go from New York, to Baltimore, to Jacksonville, to Miami, to Bermuda—in a triangle. And they would be in port for a whole week, because everything had to be unloaded by palette. It took forever. That’s why you needed three ships—to keep a regular flow. But equally there were very large ships that came from Europe that dropped their shipments as well. So it was very inefficient up until containerisation.

So let’s talk about the new Oleander. What was the catalyst for building a new ship?
So, we spent about a year with the board thinking about what was the best direction, going forward, trying to understand all of the things that go into deciding whether you buy a ship or charter. We went into the charter market, we looked at the second-hand market, we looked at convergence of ships, we looked at every option that you can imagine. Meanwhile what happened was, there had been this incredible increase in cost of building a ship. The world’s economy was booming—before the recession. They build a ship a week where we had our ship built. There were three thousand shipyards in China alone building ships, but the price went through the roof.

How come? Couldn’t keep up with the demand?
Yep! And then the recession came and everything went crazy. So when the company was looking at what to do with the aging Oleander, the options were: Do you scrap it? Do you build a new one? What do you do? And the decision was made back then to do a refurbishment, and get a bunch more years out of the ship. So a significant investment was made, and a refurbishment was done [in 2011]. Then, as we got into it, the ship was still getting older. It’s like having an old car. Meanwhile, the ship-building market softened hugely. The price that we were quoted was between 25 and 50 percent lower than some of the yards had quoted just a few years ago. So we went to the board and said, “Look, this is our time to move.” And the old Oleander still had some value, so we could sell it.

Where is it now?
It’s in Turkey! We understand it was going to be trading fruits and vegetables up into Russia in the Black Sea. That’s what the plan was.

So you decided to build a new ship. What factors influence the design choices?
That was a whole part of the year, you know. You start with your economic considerations. You have to take out your crystal ball and say, “OK, what do you think is going to happen in the next 25 years, over the life of the ship?” Because you have to be able to accommodate whatever you’re moving. It’s a very difficult thing to do. You have to remember, when we’re making this decision the economy still hadn’t recovered. It still hasn’t fully recovered. So you’re taking a leap of faith. You really are. So what we felt was important was, number one: at the end of the day, no matter what happens to Bermuda economically, people are still going to need to be fed. They’re still going to need furniture. They’re still going to need cars. They’re still going to need appliances. And if we’re going to do this, we’re going to do it properly with a ship that the businesses can rely upon so that they have every advantage to succeed. So speed was a big factor. The previous Oleander was a fast ship, so we needed a ship that would be as fast as the last one, and we succeeded with that.

We also redesigned the bow so that in heavy weather it doesn’t pound as much, so it slices more. That’s a really big change. We also put in what we call a “weather wall.” Because all our refrigerated containers are on deck, we didn’t used to have a wall to protect them. Those containers are thousands of dollars and salt water is not a good thing for them. But the really big change was…we did some calculations on what it cost to charter a car ship and to bring cars up from the Caribbean to Bermuda. It’s over a thousand miles each way. By our estimation we could provide those car carriers a better option for them to deliver into Newark to Bermuda. They can get them so they don’t have to wait a month, they can get them straight away. And we just believe that they will want to partner with us to bring all cars to Bermuda. So we had to grow that capacity.

So start to finish it was a three year project. That must have been stressful for you.
Stressful, but enjoyable. I said to my brother Jeff, “The only hard part of this is that my father doesn’t get to see this.” Because he was involved in the building of the first one. The original directors had the vision of putting the money aside for this ship, and a lot of them aren’t here today. And that’s why we invited them [for the christening] and former directors as well. So it was a special day. We know we had to get this right, because the people of Bermuda depend on us to get it right. So we were careful. We made sure we didn’t take any shortcuts and we did the right thing.