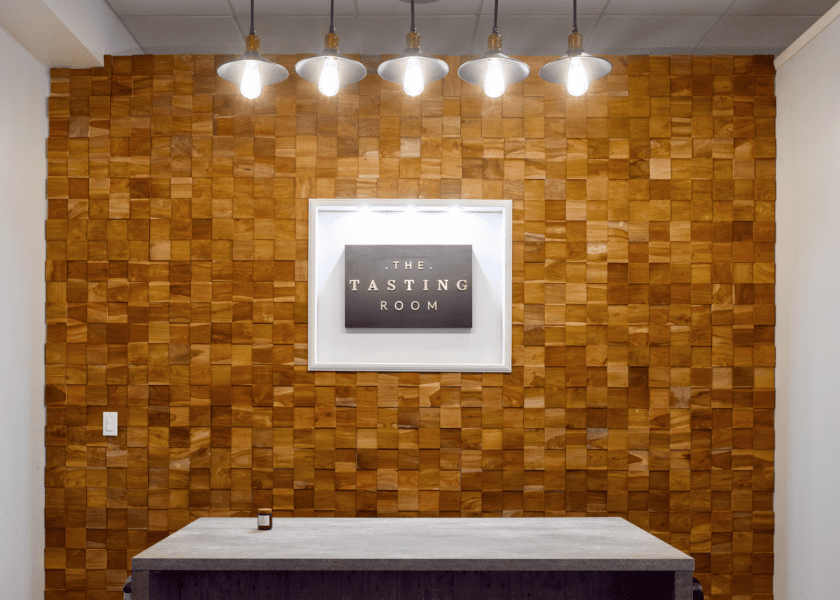 The Tasting Room is the newest addition to Bermuda’s beverage industry, and it gives me great pleasure to announce, with zero hyperbole, that it just might represent a key evolution in our collective fondness for spirits.

You’re not wrong. It is indeed just a fancy new place to buy some wine. But The Tasting Room offers one little tweak on that concept: you buy the wine after you taste it.

Yeah. I didn’t know we were allowed to do that either.

The concept isn’t a new one outside of Bermuda. Apparently. So I’m told by The Tasting Room’s General Manager, John Lake. Which is odd. Most innovations take a while to reach us, but that’s stuff like the newest tech, or changing attitudes towards being on time for dinner parties. Innovations in booze drinking have never suffered those delays. Hell, I know two women in their 60’s that claim they introduced body shots to Bermuda.

Whether late or not, it is very new here, and it’s a concept the entire business was built out from—a regular wine store “but with a difference,” says John. “That’s where the name and what we’re offering here came from.” What they’re offering, specifically, is the largest by-the-glass wine selection in the country. And an astoundingly vast selection of wines that have never been seen here in Bermuda before.

Upon entering The Tasting Room you will find it broken into two parts. First is the retail section, with wine racks from wall to wall and floor to ceiling. From the elite tier wines cheap enough to have every night with dinner, to wines that have never touched a table in Bermuda before, like a Michele Chiarlo Barolo Cannubi.

“They’ve had some wines here on island for a while now, but we’ve brought in some of their more higher-end, more exclusive bottlings. So if you’ve had the Michele Chiarlo Barbaresco before, this is a step up from that,” John says proudly.

Naturally they aren’t presumptuous enough to ONLY sell wine. They’ve also curated a selection of spirits and beers and accompanying snacks like artisanal beef jerky and Mexican chocolates. And among those beers, for the first time ever, you will find six packs of the various craft beers made locally by On De Rock Brewery—the Belgian Beach Blonde, the Amberjack Ale, the Summer Ale, and the Smith’s IPA.

But the Tasting Room wasn’t started just to sell fancy wines and snacks of course. The star of the show is the Wine Lounge. There you will find the centerpieces of the store: the wine dispensers—two fancy cases with bits and bobs of gadgets hooked up to them that look like something crafted straight from your mother’s wildest dreams. As like someone went for a refill at the McDonald’s soda fountain and thought, “This… but wine.”

Enter the Wine Lounge and you’ll check in at the desk where you are given an RFID card that you load up with “credit.” You get a glass and head over to the two dispensers and select from one of forty different wines. Twenty white and twenty red. Pour yourself a one, two, or four ounce glass, then grab a seat at one of the tables inside, or outside on the patio.

“One of the great things about our dispensers is how they do the different pour sizes, so you can really taste a wide breadth of wines without actually drinking too much. So if you have six two-ounce pours, that’s twelve ounces of wine, which is just a bit more than two regular glasses. So if you have four or five you’re good to get back on your bike and drive home having tasted a lot more than you would if you were at a regular bar or restaurant.”

You’ll also be sampling the kind of wine you don’t usually come across in those restaurants, John says. “They’ll have New Zealand Sauvignon Blanc or a Nappa, and we have some of those, but we also have some really cool grape varietals like Gavi and Amarone and Carmenere.” They’ve got plenty of great, affordable wines as well of course, but where’s the fun in coming to sample the wine you have for dinner? “We also have some big Bordeaux’s, or Justin Isosceles, which you would never find by the glass.”

And if you have the temerity to notice the wine you wanted to taste isn’t in those two dispensers? “Smile sweetly enough and we’ll open a bottle for you,” says John.