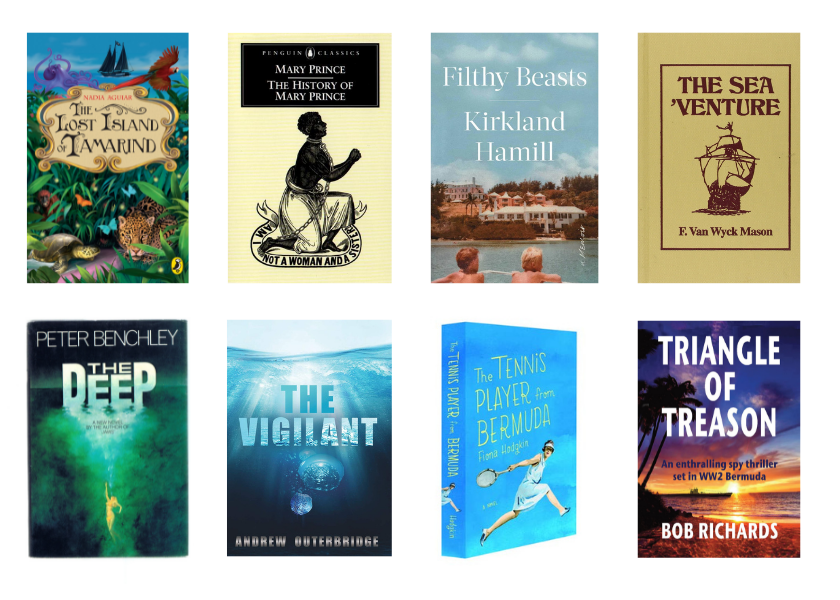 10 Good Reads Based in Bermuda

Bermuda and her beauty has long been the source of inspiration for artists of all kinds, from filmmakers to musicians to painters and of course, authors. Here are ten good reads inspired by, or based in, Bermuda.

Filthy Beasts by Kirkland Hamill
Running with Scissors meets Grey Gardens in this gripping, true riches-to-rags tale of a wealthy family who lost it all and the unforgettable journey of a man coming to terms with his family’s deep flaws and his own long-buried truths.

“Wake up, you filthy beasts!” Wendy Hamill would shout to her children in the mornings before school. Startled from their dreams, Kirk and his two brothers couldn’t help but wonder—would they find enough food in the house for breakfast?

Following a rancorous split from New York’s upper-class society, newly divorced Wendy and her three sons are exiled from the East Coast elite circle. Wendy’s middle son, Kirk, is eight when she moves the family to her native Bermuda, leaving the three young boys to fend for themselves as she chases after the highs of her old life: alcohol, a wealthy new suitor, and other indulgences.

After eventually leaving his mother’s dysfunctional orbit for college in New Orleans, Kirk begins to realize how different his family and upbringing is from that of his friends and peers. Split between extreme privilege—early years living in luxury on his family’s private compound—and bare survival—rationing food and water during the height of his mother’s alcoholism—Kirk is used to keeping up appearances and burying his inconvenient truths from the world, until he’s eighteen and falls in love for the first time.

A fascinating window into the life of extreme privilege and a powerful story of self-acceptance, Filthy Beasts recounts Kirk’s unforgettable journey through luxury hotels and charity stores, private enclaves and public shame as he confronts his family’s many imperfections, accepts his unconventional childhood, and finally comes to terms with his own hidden secrets.

The Tennis Player from Bermuda by Fiona Hodgkin
In The Tennis Player from Bermuda, Fiona Hodgkin tells the story of her short but spectacular career as an amateur tennis player in the early 1960s. Fiona met Claire Kershaw, the number one woman tennis player and twice a Wimbledon champion. Claire was an imp. To get Fiona into the qualifying round for Wimbledon, Claire makes a comical, tongue-in-cheek offer to the

mysterious ‘Committee’ that runs the Championships at Wimbledon. Fiona and Claire quickly become best friends—as well as rivals on the brilliant green grass tennis courts of Wimbledon. Against the backdrop of the London social season, the tennis competition at Wimbledon, and the tennis fashions designed by the irrepressible Teddy Tingling, Fiona has two love affairs, one of which Fiona ends forever—or perhaps she doesn’t.

Nonsuch Summer by Janet Wingate
The true story adventures of the author as a pre-teen girl growing up in Bermuda spending ‘one undated summer’ on Nonsuch Island, while her Conservationist father turns the previously barren island into a living museum of Bermuda’s own plants, animals and birds. Ecology themes are subtly interwoven with the plot. A prize-winning book, used in Bermuda’s schools.

The Deep by Peter Benchley
A young couple go to Bermuda on their honeymoon. They dive on the reefs offshore, looking for the wreck of a sunken ship. What they find lures them into a strange and increasingly terrifying encounter with past and present, a struggle for salvage and survival along the floor of the sea, in the deep.

The Sea Venture by F. Van Wyck Mason
Though fictional, this novel gives its reader a good idea of the challenges faced by those shipwrecked upon Bermuda in 1609.

Retired Captain Rodney Horatio Grant RN, through a German friend, meets Hitler and soon finds himself embroiled in treason and murder as a dedicated spy for the Third Reich.

Alongside this story of espionage and violence we meet Alan (Hooks) Jones, Bermuda ferryboat pilot and devoted family man. He makes friends with newly deployed Lieutenant Harley Harvey, call sign ‘Swordfish’. We follow Swordfish as he falls in love with Hooks’ daughter Becky, and so we learn of the difficulties endured in those days by an interracial couple striving to keep their relationship secret.

Upon uncovering the truth about Captain Grant, Swordfish and Hooks embark on a nail-biting mission to bring him down. Their adventures leave Hooks famous on the Island and Swordfish a war hero.

Triangle of Treason keeps us absorbed from beginning to end. By the time you have finished you will want to visit Bermuda.

The History of Mary Prince by Mary Prince
Born in enslavement in 1788 Bermuda, Mary Prince suffered the first of many soul-shattering experiences in her life when she was separated from her parents and siblings at the age of

twelve. Subjected to bodily and sexual abuse by subsequent masters, she was bought and sold several times before she was ultimately freed.
The first black woman to break the bonds of slavery in the British colonies and publish a record of her experiences, Prince vividly recalls her life in Bermuda and the West Indies, her rebellion against physical and psychological degradation, and her eventual escape in 1828 in England. Her straightforward, often poetic account of immense anguish, separation from her husband, and struggle for freedom inflamed public opinion during a period when stormy debates on abolition were common in both the United States and England.

The Lost Island of Tamarind by Nadia Aguiar
Maya Nelson isn’t your typical thirteen-year-old. She’s spent her whole life living on the sea with her marine biologist parents, her younger brother, Simon, and baby sister, Penny. Maya used to love living on a sailboat, but lately, everything feels terribly claustrophobic. Maya longs to go to school on land. To make friends. To lead a normal life. But when a violent storm hits and Maya’s parents are washed overboard, life becomes anything but normal. The children manage to steer the boat toward a mysterious island, to a place that doesn’t exist on a map.

Welcome to Tamarind, where fish can fly, pirates patrol the waters, jaguars lurk, the islanders are at war, and an evil, child-stealing enchantress rules the jungle.

Maya never imagined she’d have to face so many dangers. But then, who could have imagined a place like Tamarind. . . .?

In her stunning first novel, Nadia Aguiar presents a heart-pounding adventure tale about a haunting, fantastical island cut off from the outside world.

A Brave Vessel: The True Tale of the Castaways Who Rescued Jamestown and Inspired Shakespeare’s The Tempest by Hobson Woodward
In 1609, aspiring writer William Strachey set sail aboard the “Sea Venture,” bound for the New World. Caught in a hurricane, the ship separated from its fleet and wrecked on uninhabited Bermuda, a bountiful island paradise its passengers would inhabit for nearly a year before reaching their intended destination, the famine-stricken colony of Jamestown. Strachey’s meticulous account of the wreck, the castaways’ time on Bermuda, and their arrival in a devastated Jamestown was read by his contemporaries and remains among the most vivid writings of the early colonial period. Following the life of this ordinary man, Hobson Woodward tells one of the neglected but defining stories of America’s founding.

Strachey had literary aspirations and sought to capitalize on his epic experience, but his writings did not bring him the acclaim he sought. Only in the hands of “another” William would his tale of the wreck and its aftermath make history as “The Tempest.”” A Brave Vessel” is the fascinating account of a near-miss in the settling of Virginia, the true story behind one of Shakespeare’s great plays, and the tragedy of the man who failed as an author but who contributed to the creation of a masterpiece.

The Vigilant by Andrew Outerbridge
In 1969, Robert Tucker returns from strict boarding school life in England to his island home in Bermuda to work a summer job for famed local treasure diver Harry Tumbridge. An epic marine treasure hunt and adventure unfolds in this hauntingly beautiful underwater world – and above it – with unexpected twists and turns conspiring to test Robert and his seafaring compatriots.

For Tucker, young love also evolves in this tropical paradise as first experiences unfold with nascent innocence. However, treachery is afoot when Dr. Parrish, the head of the national museum, along with the Bermuda government and others, seek to take over the important 1600’s treasure-laden wreck site that Tumbridge has found. Spirited legal battles ensue, with additional international interests playing out their hands. Will love and justice prevail?

An epic summer of adventure to remember.