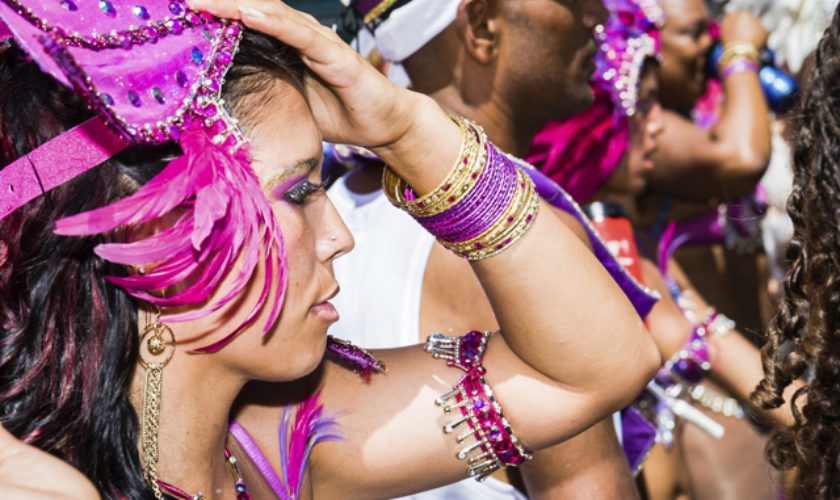 6 Reasons I Keep Going to Carnival

‘I thought you were done with all that carnival stuff,” she said. My mother’s words ring in my ears, and I put them in the folder with the eye rolls, smirks, and remarks from people who hear I’m going to Carnival again. They just don’t get it, or haven’t experienced it, but are willing to pass judgment on my choice of how to spend my time.  I can admit it: I love carnival.  Since 2007 when I went to my first Carnival, I have made it a life goal to return to Carnival in Trinidad frequently, and to experience Caribbean and other carnivals and festivals around the world.  So with that said lets list WHY I keep going back. These aren’t all the reasons, just the ones most important to me.

The simple idea of having my arms spread wide open dancing freely through the streets being me! It is a time to revel in the present, to let go of the troubles of the world and be…Happy! It’s hard not to be happy. In the time leading up to the climax, Carnival Monday and Tuesday in Trinidad, there are beautiful, genuine smiles everywhere – even more so during those final two days of revelry in costume on the road.  The closest comparison I can make for Bermudians is the feeling leading up to Cup Match, but magnified 100 times, ok, ok, maybe 67.928 times.  There is a buzz in the air and it is most definitely infectious. This buzz, this repetitious pure joy, living each moment to the fullest, speaks to the soul of humanity. This is a stark reminder of how we can lose sight of what happy is.

Lets not get into the nuances of what type of dance or how it’s done.  Let’s keep it big picture. When was the last time you lost yourself to dance?  Imagine going on vacation to dance. This isn’t going to your cousin’s destination wedding and cutting a rug, or a weekend clubbing with your crew. This is actually planning to dance daily, for the greater part of your waking hours. The pleasure I get telling a US Customs Border Patrol officer that I was dancing for the past 10 days while I was in Trinidad compensates for all of my visits to Room A, secondary security checks, and the profiling I’ve experienced traveling through the U.S. with an Islamic name on my passport post 9/11.

What would the dancing be without the music? Out of place and funny looking to say the least.  There is an incredible amount of music produced for Carnival each year. Soca’s biggest DJ just put out his mix of the more popular tunes for the season and it’s 3 hours long! Song competitions, kids competitions, competitions for sub-genres, for steel pan bands, the list is long, really long, really really long. The music is contagious, partly because you hear it repetitively, everywhere, at all times of day: in the grocery store, on the street and definitely in the many limes (get together/party), boat rides and fetes (parties/concerts) taking place all over the country. Sometimes you have to join in for safety’s sake.  Take 2010’s Palance for example you can’t stand still with your arms crossed when 2000 people start bouncing toward you…well you can, but I promise it hurts less if you move with them.

The music evolves into a reminder of the feeling, that tangible energy hippy stuff I mentioned.  The songs from carnival are portals to that happiness felt during carnival, not mere musical compositions with repetitive themes of jump, wine, rum, wave, jook, drink, and bumpa.

Once you’re in, you’re in. You are one of many, masqueraders, feters, flag bearers, drinkers, and wining bandits.  There are thousands of people who are doing exactly the same things as you.  Many may find it a strange comparison but it reminds me of Christmas, Kwanza and Ramadan.  During these religious periods you can feel that you are part of something greater, your hunger or celebration is the next mans and the next mans, across the world and together you take the journey.  Carnival gives me that feeling. Collectively we:  are working out to have the stamina for this experience, picked costumes, organized fete tickets, picked a song (that’s MY song girl!!!), sourced clothes for fetes, even if it is just 3 cut offs and 7 tanks, booked flight, accommodation, and ground transport, after all that how could you not get excited.

With the advent of the ‘interwebs’ and social media, carnival heads have a platform to share tips, information and promote to each other.  It elevates this collective feeling, a true community investing and striving toward one goal.  The excitement is material ( more flower power). After years of attending Carnival, I have built a network, and a carnival family, outside of the exponentially growing Bermudian contingent that head down.  There was a point when we went to carnival where DJs and artists never shouted out Bermuda. Now there are so many Bermudians and Bermudian flags in fetes, little Bermuda gets recognition all through carnival.

I obviously believe that there is carnival energy. I also think the energy is female, and if not, it’s definitely female driven.  Women are in charge, women are the most adorned on the road, the extravagance, beauty, and intricacy of modern day bikini mas costumes are really only seen in female costumes. Women roaming through the party doing whatever they please.  Men being reasonably submissive, accepting for fact they will be wined on, climbed on, and physically controlled by a random woman!

You can argue the sex of the energy at Carnival, but there’s no denying that the freedom and utter dominance displayed by women at Carnival rocks the core of millennia of societal norms.

When I tabled the idea of carnival having a female energy with my female feting friends one mentioned that at Carnival she felt safer and more empowered than she ever has in any social setting. ‘I did things I would never to at home!’ she said.  Safety is an interesting concept when we think about Trinidad being known for violence, kidnappings, and theft. But in her view, with full knowledge of the dangers of Trinidad, she felt the understanding of ‘free-up’ prevailed at the events she was at.

When you realize that one of your main sources of energy, stems from another country’s celebration of their culture, its hard accepting how the cultural expression of the people of my country of birth has been stifled and contained. There are very few of us who make a living as cultural icons.  Very few of us who work on large scale cultural projects or displays year round.  In Trinidad, certain civil servants, musicians, writers, designers, band leaders, seamstresses, and so many more all work hard for carnival, many of them throughout the year.

Seeing Bermudians being so proud to carry and wave their flags is a beautiful thing.  The carnival contingent is full Bermuda ambassadors the BTA wish we had more of.  I hope that one day we’ll be equally excited and proud on our own island, plan for months to celebrate our culture, grin at our creations, and entice the world to join us.   Until then (and even then), I’ll carry my flag, whistle, and gombey skanks to Carnival around the world.