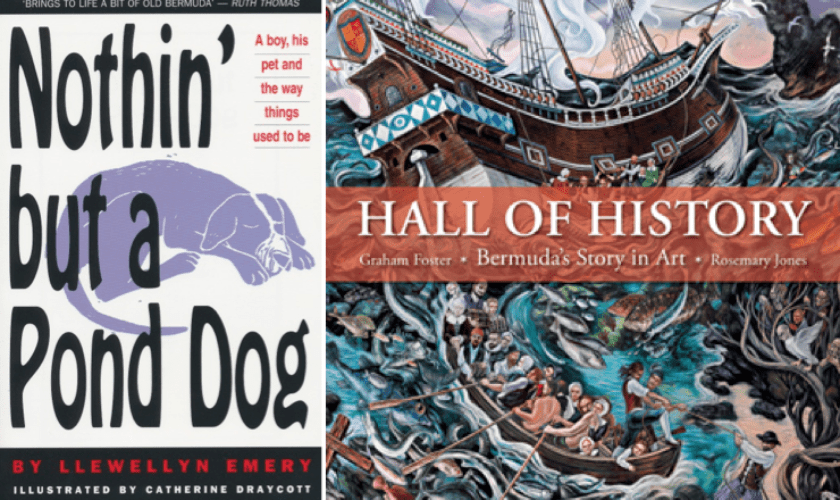 8 Books That Should Be On Every Bermudian’s Shelf

With so many informative, thought provoking works from local authors, there is never a shortage of books to read about Bermuda. With that in mind, coming up with 8 must-haves is a tall order, but regardless of our omissions, the following list will keep you in good stead when building your own collection of local literature.

The pocket-sized slang dictionary has been a staple of every Bermudian’s book collection since it was published in 1984 by Fred Barritt and Peter Smith. While it can certainly help a visitor translate some local lingo, a copy of Bermewjan Vurds is best saved for trips abroad. When home seems like a distant memory, there’s nothing that fills you with national pride quite like reading the definition of ENH-ENNHH (See BYE-NO-BYE.)

Made by the Bermudian 2009 Committee, in association with the Bermuda Government this book is a summarized goldmine of Bermudian social and historical documentation. It serves as a wide ranging guide to the island. Bermuda: 400 years also touches on many contributors to Bermudian business, society, and arts. This book makes for a good reference guide for many past and present subjects local.

Chained to the Rock

Written by Cyril Outerbridge Packwood, Chained to the Rock is a detailed independent study into the african diaspora relating to Bermuda. Aspects of law, documentation and personal accounts are highlighted, giving an in depth perspective into the history of Bermuda’s legal and regulatory framework dealing with slavery. With many illustrations, this book is easy reading and well put together, a must read for anyone inquiring into the subject relating to Bermuda.

Nothin’ But A Pond dog

A compilation of short stories that brings to life the good old days when the author grew up by “The Pond” in Pembroke . Written by Llewellyn Emery and illustrated by Catherine Draycott, Nothin’ But A Pond Dog is very descriptive, loaded with visual commentary that helps convey an era that has since passed. This book makes a great gift, and sheds light on the experiences of a inner city pembroke native, known sometimes as “pond dog”.

The Woppened books are a series of comics created by recently passed Peter Woolcock. They mostly consist of cartoons, depicting significant members of Bermuda public service. Peter Woolcock was gifted in the sense that he was able to create satirical, comical, cartoons of public officials without being cruel or malicious. There are 22 books in total, once for all comics created for the Royal Gazette for each year. The artistic talent is uncanny, in that all members depicted in the comics are not only easy to recognise, but it is easy for one to understand the intended emotion they were intended to convey. This is  a great addition to any Bermudian book collection.

Written by Liana Hall and Illustrated by Alicia Wanklyn, this book is aimed at the younger readers. Comes in handy when tucking a little one in at night, and will compliment any Bermudian bookshelf perfectly. Its a story of a Bermuda home that sits abandoned for years before the lock is mysteriously opened. Part proceeds from The Little Cottage go to charity. Its also a new book. Being released in January 2015, this will be a new story for youngsters of all ages to enjoy.

Music on the Rock

This is a brilliant, comprehensive history of Bermudian Music featuring iconic photographs throughout the ages. Written by Dale Butler JP, Music on the Rock touches on a myriad of different genres of music from jazz, calypso, country, soul, reggae, gospel and more. It’s a perfect gift for a performing artist and is a great reference guide on the bookshelf of a music lover.

Hall of History is a large book, but artistically unique. The depictions are derived from a larger than life mural in the Royal Naval Dockyard at The Commissioner’s House. Artwork is by Graham Foster, and text is by Rosemary Jones. One reason why this book is so special is because it depicts many known facts of Bermuda’s history during a time when there were no cameras. This allows the imagination to run wild from a perspective of historical facts to reference. The 2011 visualization of history is highly recommended, second to visiting the mural in person at The Commissioner’s House.