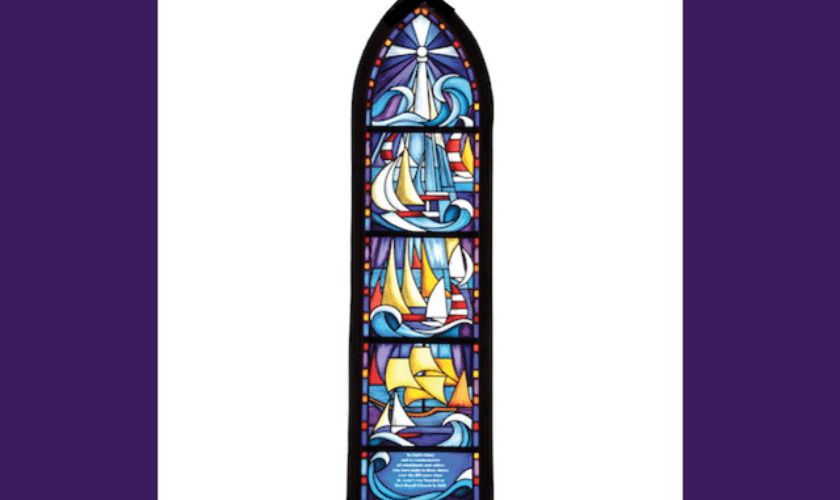 St. Anne’s church in Southampton is one of Bermuda’s prettiest churches, thanks in part to its plethora of beautiful stained glass windows. So it was decided that to commemorate the church’s 400th anniversary, the last empty window would be filled with another stained glass creation.

Ruth Thomas, Bermuda’s first cultural affairs officer and a loyal parishioner ever since she was warmly welcomed at St. Anne’s in 1964, was delighted when she heard the news. She had long wanted to contribute something special to the celebration but wasn’t sure what. Now she knew. She would donate the window, but she would do it anonymously. Only the minister, Reverend David Matthews, and the stained-glass artist Vivienne Gardner would be in on the secret.

Gardner had already created seven of the windows, including one showing Christ stilling the storm on the Sea of Galilee. When Thomas explained that she wanted the window to capture the history of Bermuda and the environment, Gardner suggested sailboats since they were how people had come to Bermuda for much of its history.

As Thomas explains, “Our history, our culture in Bermuda, is so inextricably bound to the sea. You can’t get away from that. It’s a segment that touched everybody’s life, be it black, white, rich or poor, because the sea was a major part of transportation.”

St. Anne’s, overlooking the south shore, has had its own connections with the ocean. It inspired the names of the beaches opposite the church, Church Bay and Christians Bay, and it is also the subject of a much-loved story in local lore: In the days when Bermudians plundered ships wrecked on the reef, a preacher at St. Anne’s, watching a boat go down and his congregation leave in search of loot, shouted, “Wait! I must take off my cassock and then we’ll start even!”

So the new window, appropriately facing south and the sea, colourfully shows Bermuda’s relationship with the sea. At the top is Gibb’s Hill Lighthouse, its light beams in the shape of a cross, which as Gardner explains is “God’s light drawing people safely to the shore.” Then there are the racing yachts with an America’s Cup boat included, next the Spirit of Bermuda representing the boats and fitted dinghies built in Bermuda, and lastly the tall ships and pilot boats.

The inscription “To God’s Glory and to commemorate all inhabitants and sailors who have come to these shores over the 400 years since St. Anne’s was founded as Port Royal Church in 1616” is entirely fitting.