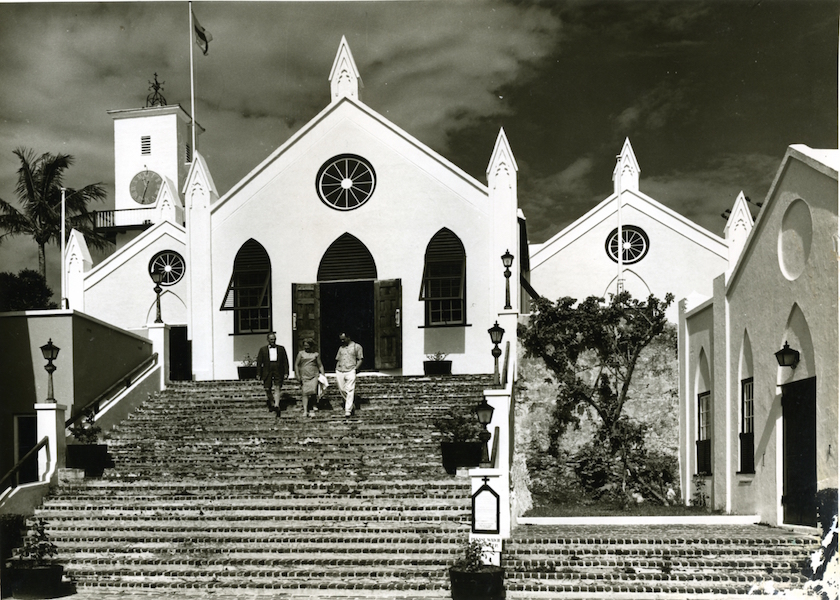 A History of Witchcraft in Bermuda

In the 1650s, Bermuda saw the execution by hanging of five people convicted as witches – four women and one man.

From 1484-1750, 200,000 witches were executed in England. The so-called “witchfinder generall,” Matthew Hopkins, was on a literal witch hunt in the 1600s, traveling around the country and ratting out so-called witches. Some Bermudian men would have visited England during this time where they were probably affected by the witchfinder generall’s ideas, and within about 5 years, 5 people were killed in a witch-finding craze.

What Caused The Craze?
In the 1640s, England was in the midst of a civil war between those who wanted to see England governed by a parliamentary system and those who wanted a monarchy. In addition, religious pressures were heating up at this time – conservative Puritans wanted to see the Church of England washed of all Roman Catholic practices, and not everyone was eager for this change. These troubles carried over to Bermuda.

It was a period of mass disruption. Religious observances in Bermuda were being challenged by new practices. People thought that their country and faith might not survive such upheaval – and they were looking for a scapegoat. Everyone was looking for someone to blame, and historians believe that witch hunting may have been an easy way to target people with mental or physical disabilities, or people generally regarded as pests in the community for the religious and political turmoil.

What Did Bermuda’s Witches Have in Common?
Almost all of them were spinsters, women who made their living by spinning fibres into yarn for use in textile manufacture.

All convicted witches had histories of unpleasantness. It would have been easy to pin someone unliked as being the cause of the island’s misfortunes, and they likely wouldn’t have had many advocates arguing for their release.

All were from the lower stratum of Bermudian society, and some had troubled marriages.

How Were Witches Identified?
Matthew Hopkins laid out detailed instructions on how to identify witch marks – a dark coloured spot that would not bleed or react to pain. Women were also tested by being tossed into water – if they sank, they were innocent, and if they floated they were guilty.

Methods for identifying a witch-mark probably reached Bermuda through various publications – A Guide To Grand-Jury Men described what we now know as skin tags – “a little teate,” and moles – “blewish spots,” that would identify a witch, and warned that these would “be often in their secretest parts, and therefore require diligent and careful search.”

Jean Gardiner
Jean Gardiner was accused of threatening and bewitching a mixed race woman called Tomasin. She reportedly threatened “to crampe” the woman, and afterwards Tomasin said she was struck blind and dumb for two hours.

At first, no witch marks were found by the panel of women appointed to search Gardiner’s body, but later a suspicious blue spot was found inside her mouth. Perhaps to double check their theories, Gardiner also undertook the water test. Bermuda’s oceanic waters effectively guaranteed that she would float, and she was proclaimed a witch.

She was hung at Gallow’s Island in St. George, which at that time was only a few metres from the mainland. Now, it is known as Ordnance Island, and connected to St. George Square by a bridge. There were many spectators at Gardiner’s execution since the island hadn’t seen a hanging in eleven years. 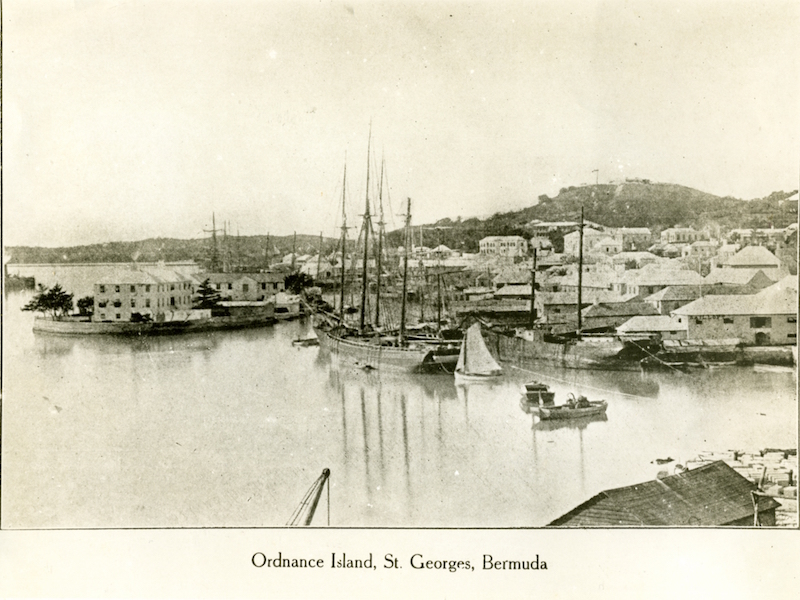 The Middletons
A husband and wife – Elizabeth and John Middleton, were both accused of witchcraft.

Mrs. Middleton seemed mostly to be accused because of proximity to her husband – but also was accused of saying “cursed speeches” and sending a child into fitts. Her husband, meanwhile confessed to being a witch, despite undoubtedly knowing that it would lead to his execution.

Middleton seemed to shout about his witchcraft – neighbours and citizens had heard him call himself a witch. Apparently a neighbour heard him announce that he had “private marks about him” – one “between his fundament and his Codd, the other on the inside of his thigh.” How can we unravel this archaic speech? A “fundament” is a person’s buttocks, “Codd” is a little less clear, but perhaps means “bag” or “fool” – a very private and secret location, whatever it means. Another neighbour even suggested that Middleton had the ability to transform into a black cat.

After his body was searched, witch-marks found, and he floated during the water test, he confessed that he was a witch, though he “knew yt not before.” Witch or not, Middleton was a snitch – when asked if he knew of any other witches, he answered that the wife of Thos Stevenson was one. In a later trial, he said he feared there were “too many” witches in Bermuda to name.

He seemed to be encouraging a witch hunt, identifying various women and seemingly becoming the authority on witch marks – rallying panels of women to search the women he identified as witches, and giving instructions on what to look for. He was hanged in 1653 after accusing Stevenson and Moore.

Christian Stevenson
It seemed that Stevenson was something of a local pest – dozens of witnesses came out to testify against her. Many said that she had attempted to sell them some item – but when they refused, became angry and cursed them. One man said that after an encounter with her, his child fell ill and had unnatural pains until she died.

She was accused of making a woman’s tongue hang out of her mouth “like a beast’s tongue” for many days, so she could not leave the house. She was accused of causing butter not to churn, and of causing a miscarriage. There were many accounts of people being haunted by Stevenson in their dreams.

Maybe Stevenson had some idea of how people regarded her – when she offered a rose to a man and he refused, she proclaimed piteously “I am noe witch.” After a search of her body, the presence of suspicious marks begged to differ. She had blue spots and “teates,” and she was hanged.

Alice Moore
Moore was accused of ruining a neighbour’s soap making, killing a neighbour’s pigs, and ruining a corn crop through devilish means. In one instance, she reportedly went to a man’s house to buy a sow, but found the price too high. Later, the sow gave birth and her and all her piglets died, so the man believed she had cursed the animal.

These accusations were quite tame compared to the witches who had come before her. However, she was found guilty and hanged on the same day as Stevenson after the discovery of offensive witch marks on her body.

Elizabeth Page and Jane Hopkins
In 1654, the Mayflower stopped in Bermuda because the captain believed there to be two witches on board – only Hopkins was hanged. The notion of a sea witch was intrinsic to maritime superstitions. Greeks spoke of mermaids who would lure sailors to their death, and other stories claimed of normal-looking women who were able to control the seas, or destroy ships.

Many people on the ship accused Page of witchcraft that went above and beyond messing with humans – years earlier they said they heard her talking about summoning the devil himself. Page had also apparently made the ship’s compass needle move just by pointing her finger at it, but revealed later that it was a trick with a magnet.

A peeping tom said they had seen a mark on Hopkins’ shoulder when she was dressing. Hopkins was as brazen as Mr. Middleton with her witchery – when asked about the mark, she said it had come to her recently, after she had “had her desire upon her enemyes.” She had asked God to show her some sign that she was a witch, and at that moment a rat ran across the ship. Rats were ubiquitous on ships at this time, but many believed it was Hopkins’ familiar – a bewitched servant in the form of an animal.

Upon searching their bodies, Page had no witch marks, but Hopkins had many, and she hanged a few days later.

Was Witchcraft a Real Practice?
It is unclear whether ‘witchcraft’ was ever a ‘real’ religion, but characterizations of witchcraft and witches have existed since Ancient Greek times. In the early middle ages, Christian thinkers rejected notions of witchcraft as ridiculous and superstitious – a religious code at the time stated, “let nobody presume to kill a foreign serving maid or female as a witch, for it is not possible, nor ought to be believed by Christian minds.”

Why Did People Confess?
If ‘witchcraft’ wasn’t a uniform belief system, how could anyone confess to it? Society in the early modern period was made up of superstitious people – they believed that misfortunes were caused by the devil working against you. In many of the above cases, emotional people wanted someone to blame, and it was easy to point to a witch. Petty neighbor disputes, crop failures, and livestock or human death could be attributed to ‘witchcraft’ purely using circumstantial evidence.

In some cases, perhaps, the people who confessed did so because they superstitiously believed they were inhabited by the devil, if only temporarily. Some others who confessed may have thought that a confession would allow them to escape punishment if they repented.