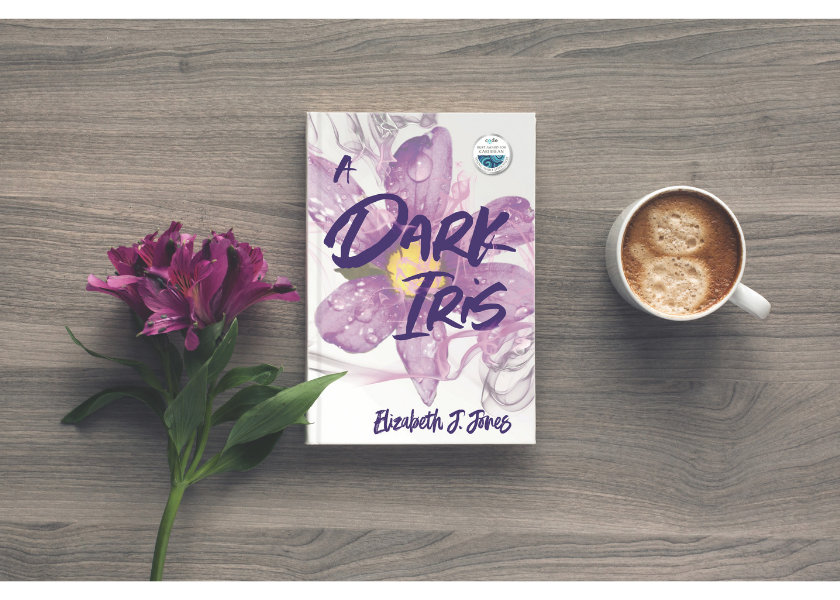 An excerpt from the novel by Bermudian magazine contributor Elizabeth J. Jones, published recently by Blouse and Skirt (Blue Banyon) Books. A Dark Iris was shortlisted for the 2018 CODE Burt Award for Caribbean Young Adult Literature and is available in Bermuda’s bookstores. Elizabeth Jones will be signing books this Thursday, June 27th at the Bermuda National Library from 6:00pm to 7:30pm.

After the dishes were done, she couldn’t help going to her pastels box to make sure it was still there. She stroked the wood tenderly and slid the drawers open and shut.

“I should have bought you paper, Bek. I don’t know why I didn’t,” said her daddy, watching her.

“Then why don’t you go down to the cove? There’s still some light. You could paint the sunset.”

After grabbing her sketch book, Rebekah carefully chose charcoal, pencils, and pastels for her portable box and slipped out of the back door into the yard and down towards the gate. The narrow driveway was more of a lane edged with the fronds of stumpy palmetto trees. Rebekah walked through the gate, down to the road, then crossed over and turned left, following the road until she came to a little cove tucked between rocks. Sitting on a grassy slope, she gazed at the glassiness of the water, and the roots of mangroves pushing upwards and edging the sand. To her left, a frangipani with creamy flowers filled the air with fragrance. She thought of painting the frangipani, but she had brought the wrong colours. How impossible it was to decide in advance which colours out of 500 would work and how wonderful to have that problem.

She took out a charcoal and quickly sketched the curve of the mangroves around the bay, the hillside in the distance, topped with casuarinas, the jetty on the left. Then she tried blues and pinks for the water, greens and ochres for the foliage. How could she capture the mysterious lights in the entangled roots of the mangroves? And the frangipani. She decided to sketch it in after all but as she did, it seemed to fade out of the light until there was almost nothing there at all. The casuarinas on top of the hill faded out as well, replaced by a few spindly cedars. But the mangroves remained, thicker and lusher. What’s happening? She looked up and caught her breath. The casuarinas really had gone. And the frangipani. Even the scent had faded from the air.

She looked towards the jetty and saw a small figure stand there, then jump onto the narrow strip of sand. The figure came closer so that Rebekah could see it was a girl. The girl. The same child she had seen at Hog Bay when her daddy went to get the hooks. Rebekah’s heart leapt. The child darted towards her, running to the top of the slope. Then she sat next to Rebekah, right next to her.

“Well, hello, little girl,” Rebekah said after only a slight hesitation. The girl looked at her with such trust, Rebekah wanted to hug her. But, no, that would be too forward. This was already strange enough.

The child was older now. Her front teeth had grown through. And somehow her face had lengthened a little, losing its elfin quality. Her chest was more developed; she had breasts, tiny but breasts all the same. She was smiling and her eyes, the colour of seaweed, had an innocent expression. This time I mustn’t forget what she looks like, Rebekah told herself. I must learn her face by heart. I must draw her.

But then the child surprised her. She pointed a slim brown finger at Rebekah’s drawing of the cove.

“Don’t touch please. You could spoil the pastel.”

But the child shook her head and put her finger firmly on the page, followed the contour of the shore line. She left no mark.

Then the little girl, not so little now, turned to Rebekah. She touched one of her earrings, then the other, her eyes seemingly entranced by the brightness of the gold.

Her finger is so light, Rebekah thought. Like a feather. She noticed the girl’s ears were not pierced.

“You don’t have any earrings?”

Once again, the child shook her head. Her lips parted and she said softly, so softly, her words were fluttering breaths, “No finery. No finery.”

The words sounded so odd to Rebekah’s ears, she thought she’d imagined them. But then she heard them again floating on the air. “No finery.” What could that mean? The words filled her with unease.

“What’s your name little girl? Who are you?” Her voice sounded unnaturally loud, almost impolite. Rebekah never liked to be impolite but, after all, it wasn’t good manners to touch someone’s painting without asking. The child ignored the question. Instead, she pointed again to the sketch book and Rebekah could have sworn she heard the whisper, “Draw me, draw me.”

I’m imagining it, Rebekah thought. But even if I’m not, I want to draw her anyway. That’s what I should have done in Somerset. She tore out her drawing of the cove and started a new page. The girl went to her box, picked out a charcoal and handed it to Rebekah. She put her finger on the dazzling white page leaving no print, no mark at all. Then she looked up at Rebekah, her eyes begging her to begin. Rebekah obediently worked the charcoal onto the page, and soon the child’s cap, face, and frame emerged. Her skirt was the same as before, but it was shorter, Rebekah realised, because her legs were longer. The child’s eyes grew round, spellbound by the magic of the creation.
She’s really beautiful, Rebekah thought. But who is she? Where has she come from?

“What’s your name, little girl?” Rebekah asked again after she had signed the drawing in the bottom left hand corner. “I’m going to write it on the drawing so everybody will know it’s you.” But the child seemed no longer interested now that the drawing was finished. She jumped to her feet.
“Why don’t you tell me your name? See, my name is Rebekah Eve,” she said pointing to her signature. “What’s yours?”

The little girl turned away and started to run towards where the frangipani had been. Then she stopped, turned her head and waved. Rebekah thought she could hear her calling out, “Bek, Bek.” The frangipani drifted back into view and then sank into silhouette, its perfume once again lingering on the night air. The child disappeared altogether.

Nervy, Rebekah thought, calling me that. Nobody calls me Bek. Nobody except for my daddy.

A Dark Iris by Elizabeth J. Jones was shortlisted for the 2018 CODE Burt Award for Caribbean Young Adult Literature. Published by Blouse and Skirt (Blue Banyon) Books, it is available in Bermuda’s bookshops.