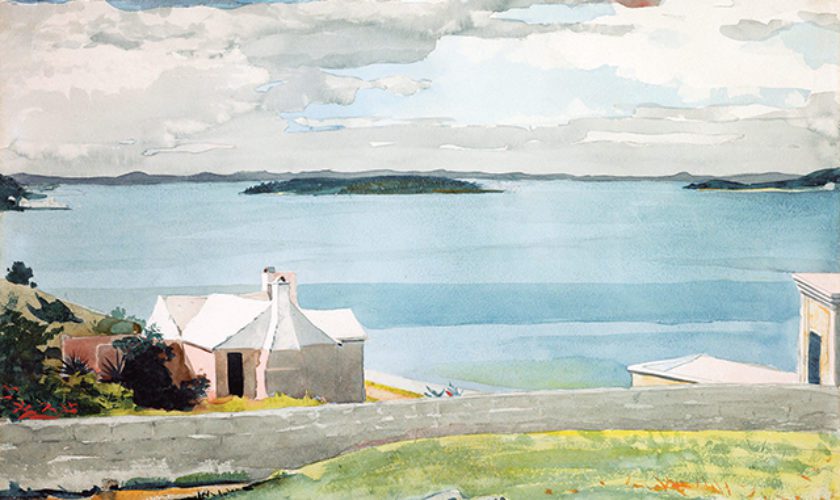 A Room with a View

Masterworks Museum of Bermuda Art is proud to be celebrating its 30th anniversary with a special, multifaceted exhibit called Room with a View. Made up of four separate displays covering different themes that relate to Bermuda in one way or another, this exhibit aims to highlight Masterworks’s evolution from a vision 30 years ago to the permanent institution it’s become today. We spoke with curator and director of collections Elise Outerbridge for more information on the new exhibit.

“Because 2017 marks our 30th birthday, we thought that it was only appropriate to include all of the components that have brought us to where we are today,” says Outerbridge of the gallery’s decision to showcase the four separate displays as one overall exhibit. “Each display represents an important part of our development and the degree of excellence we have been able to achieve.” The displays themselves are entitled The 30th Anniversary Collection, Canada, Eh?, Bermuda 4 Sail, and Gleizes, Hartley and Demuth, with all four representing a special connection to our island and how Bermuda became what it is today.

The 30th Anniversary Collection features some of Masterworks’s most celebrated works from its vault, with the featured pieces having been previously displayed at some point prior during the past 30-plus years. Three such pieces are watercolours by famed American landscape painter Winslow Homer, one of which was generously given to the gallery in its early days after previously having been on loan. Another, realist painter Andrew Wyeth’s ‘Royal Palms’, was originally featured in an exhibition at City Hall in 1986 under the Department of Community and Cultural Affairs. The display also features a collection of works that Masterworks lovingly refers to as the ‘Twelve Apostles’: the first paintings they acquired outright in 1987.

Bermuda 4 Sail sheds light on a significant aspect of Bermuda’s marine history: the “Bermuda rig.” This unique mast and rigging configuration once proved to be the island’s biggest nautical export, and was ultimately the inspiration for the rigging used on most modern sailboats to this day. The display features artwork reflecting different representations of this unique style, and highlights the different interpretations of it that eventually emerged.

Gleizes, Hartley and Demuth recalls the impact that renowned painters Albert Gleizes, Marsden Hartley and Charles Demuth had on the global art scene as a result of their respective trips to Bermuda in the early twentieth century. During this time, Gleizes’s French cubist style fused with Hartley and Demuth’s early American modernism and made an important, lasting impact on twentieth-century art that can be partially attributed to their stay on our island.

Canada, Eh? features works by Jack Bush, Isabel McLaughlin, Nora Collyer and Andre Bieler, amongst others, and highlights the long-standing ties between Bermuda and Canada in the context of Canada’s 150th anniversary of independence from Britain. The display explores how artists from the Toronto area and Maritime provinces in particular have a tradition of visiting Bermuda (most notably in the winter months), where they are inspired by the island and ultimately translate their northern sensibilities into a tropical subject matter.

“We have never stopped striving to promote Bermuda culture and heritage through the visual arts, and hope to expand our educational programmes and reach out to a wider section of the community both old and young,” Outerbridge explains of how she envisions the Masterworks gallery evolving in the future. “We have always had a big vision and in the long term hope we will be expanding both our collection and its presence in the community.” Adding that the Room with a View exhibit has been broadly advertised on TripAdvisor, social media, overseas through the Bermuda Tourism Authority, and on local TV and radio and in print media, she is optimistic that the scope of the exhibit will attract visitors old and new. “This show offers such a wide variety to choose from, from contemporary Bermudian artists to the earliest depictions of our island.”

The Room with a View exhibit will be on display until September 30th.