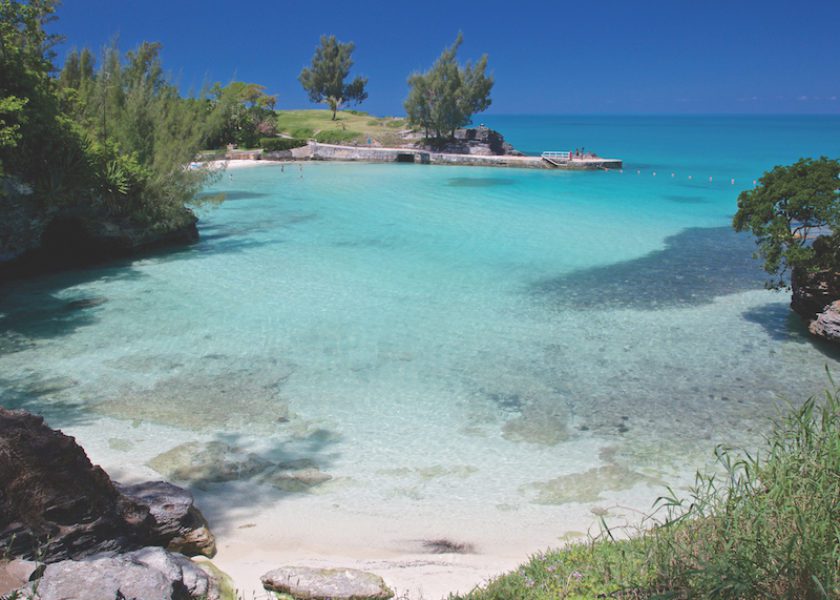 New for 2018, this is more than just another book of beautiful photographs. It’s a journey through Bermuda from east to west, which gives equal standing to each of the nine parishes, plus the City of Hamilton and Town of St. George.

Each section begins with an introduction about the parish or municipality itself and the origins of its name (past and present), together with its coat of arms and two maps—the larger one showing the locations where all the photographs were taken in that particular parish.

The 137 fully captioned photographs—including 25 aerial images—contain fascinating information (both of an historical and general nature) about their locations. In fact, the author admits to spending twice as much time researching and writing the book and captions than he did on taking the actual photographs.

Did you know for example that the early settlers called Devonshire Parish “Brackish Pond,” or that Elbow Beach was originally named Elba (the owner of the first guest house there being an admirer of Napoleon)?

As Chris Wilcox explains, “This book is neither a travel guide nor an historical record, but seeks to highlight many of the foremost attractions found within Bermuda’s nine parishes, as well as the City of Hamilton and the Town of St. George.

“I hope it will inspire visitors,” he says, “to discover for themselves what each particular parish has to offer, and for Bermudians and residents to fully reacquaint themselves with their beautiful island home.”

Remarkably, Chris Wilcox began working on this book over thirty years ago: taking photographs, creating his own large-scale parish maps and writing captions. However after much work and consultation, he concluded that there might be little interest in the book and in his own words, he “shelved the project.” By the time he resurrected the project in early 2016, so much had changed in Bermuda during those intervening three decades that he had to begin entirely afresh with all new photographs and brand-new maps.

With the obvious exception of the aerial photographs, practically all the images appearing in the book have been taken from public places or highways. This was a deliberate move on the part of the author to encourage readers to personally visit those locations which hold particular appeal for them.

Upon its release, Ellen Hollis, Local Studies Librarian with the Bermuda Library, described Bermuda: Parish by Parish as “a welcome new addition, one which fills a current vacuum in Bermuda publications.”

Martin Buckley, Department Manager of The Bookmart at Brown & Co. who was also an advisor on the project said, “This book will become the standard work of Bermuda landscape photography and will appeal to both locals and visitors, alike.” That has since come to pass, and in the case of The Bookmart it immediately became their biggest selling title in this genre.