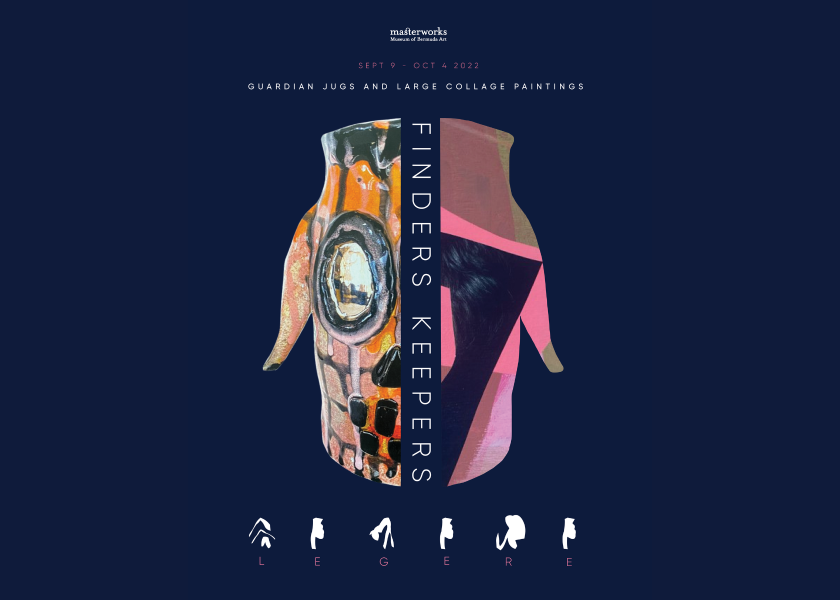 Opening next in the Rick Faries Gallery at Masterworks Museum of Bermuda Art is Finders Keepers, a solo exhibition by Bermudian Artist Jon Legere featuring a collection of ‘Guardian Jugs’ and large collage paintings.

Unlike traditional gallery openings where one might expect to find all artworks present in the show, some of the Guardian Jugs will not be displayed in the exhibition until they are found. The artist has hidden six jugs across the island in places that are significant to him and his life in Bermuda. “I thought it would be fun to play a game with this show rather than just show more paintings on white walls- so something that is interactive, a bit of adventure and celebrates this beautiful island,” he explained.

The public is invited to attend the opening of Finders Keepers on September 9th at 5:30pm and try their hand at decoding clues and puzzles from accompanying artworks in the show. From there, you will begin your journey to discovering the Guardians. Legere will also post additional clues on his Instagram account.

Although six jugs have been hidden, the artist has made close to twenty and intends to make more and hide them all over the world. Each one is a “contemporary version of Face Jugs, which have existed throughout time in all different cultures. They go back thousands of years and were created to scare off evil spirits,” explained Legere.

“The Guardian Jugs get their shape from the little yellow core of a Bermudiana flower and have three different classes, Defenders (teeth), Balancers (equal lips) and Breathers (open mouth). All of the Guardian Jugs have been enchanted and offer whoever cares for them their magical powers.”

Given the circumstances of the last few years, Legere said, “I think we all could use a Guardian Jug in the house.” However, he cautioned, “If you find a ‘Breather Jug’ you have to be very careful. They mimic the energy in the room so positivity in, positivity out. But negativity in…”

As a mixed media artist, Legere predominately works with paint, collage and photography. However, the creation of the Guardian Jugs marked the artists first time using ceramics as a medium. When asked what led him to explore this medium, Legere said, “The idea chose the medium. I wanted to create something that I could hide around the island for people to find and in the case they were never found I wanted to make them out of a material that would last a really long time. Ceramics can last hundreds of years in the wild”.

Also included in the show are four diptych paintings, each comprising of two 4×4 foot squares on wood, and assembled with “media that has been sitting around, lost and forgotten.”

Legere divulged that his large-scale collage paintings have always expressed a connection with their “immediate surroundings- colour wise and graphically.” For this particular show, the artist has sourced collage materials locally from The Salvation Army, The Barn and anywhere else he could find printed matter. “I love rummaging through piles of thrown out books and magazines and salvaging moments with a scalpel.”

The artist hopes visitors to his show will “feel the energy and joy in the work.” “These are real Bermuda summertime paintings and couldn’t have been made without the sun bearing down, wet saltwater shorts, ants dancing on the surface and sunscreen dripping off of my face.”

Jon Legere is a widely accomplished artist whose work has been shown in galleries across the globe. Although he is currently based in New York, Bermuda is an integral part of his artistry. “It’s always an honour and privilege to show work here,” he added.

‘Finders Keepers’ – a collection of ‘Guardian Jugs’ and Large Collage Paintings will exhibit September 9th through October 4th in the Rick Faries Gallery at Masterworks Museum of Bermuda Art.

For those who dare to embark on the quest to finding the guardians, the artist has provided The Bermudian with the following bonus clue: Fright Night.