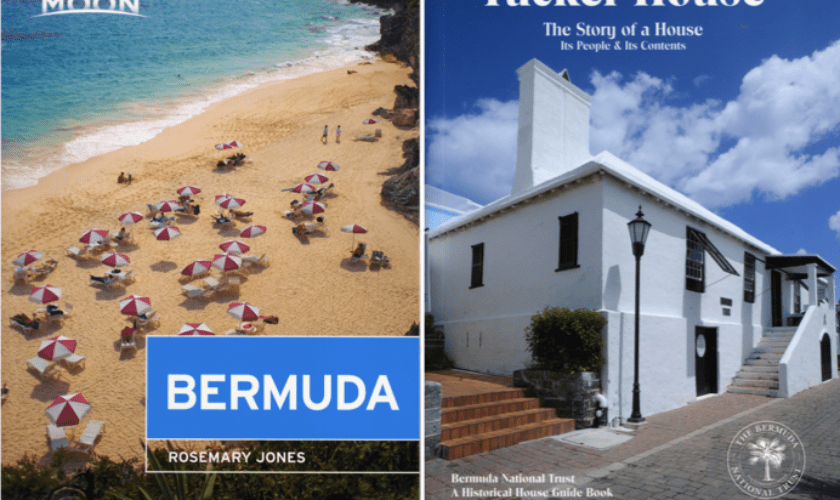 The fourth edition of Moon Bermuda, written by Bermudian Rosemary Jones and published by Avalon Travel of Berkeley, California, has been released.
The 368-page, full-colour title—which has sold 20,000 guides or e-books since the fall of 2006—is available in Bermuda and throughout North America and Europe via online booksellers and major bookstores, including the US Barnes & Noble and Canada’s Indigo retail chains.
“I feel very privileged as a Bermudian to have the opportunity to highlight the island’s spectacular offerings via this international product,” says Jones, a journalist and author, director of Brimstone Media Ltd., and communications manager for the Bermuda Business Development Agency (BDA).
“As a born-and-bred local, I’m able to offer what almost no other mass-market Bermuda guidebooks can—authentic ‘insider’ knowledge about the island, its people, its best attractions, and the elements we, as islanders, are proudest of. This is one of just two major guidebooks I’m aware of that are actually authored by Bermudians.”
The updated fourth edition is the first Moon Bermuda to feature full-colour photographs throughout, most images shot by Jones—with a few by her 14-year-old son, Gabriel.
“Since its launch in 2006, I’ve updated this guide every three years and am always impressed by the evolution of our tourism product,” Jones says. “But this time has seen the biggest wholesale revamp of Bermuda’s offerings and general cohesion and attitude, in my opinion. The impetus of the upcoming America’s Cup, major reinvestment by hoteliers, new restaurants, and a reinvigorated spirit of entrepreneurship among Bermudians—I think there’s never been a better time for visitors to come and experience the island.”
Jones, who was a People magazine correspondent and frequent contributor to Islands magazine, previously worked as a reporter for the Toronto Star, Toronto Sun and Broadcast News/Canadian Press Toronto. Published in numerous North American newspapers and magazines, she is a former editor of The Bermudian magazine, managing editor of Bermudian Business magazine, and author of several books, including Royal Bermuda, Hall of History: Bermuda’s Story in Art, and Bermuda: Five Centuries, winner of a Bermuda Literacy Award for Non-Fiction. She currently works as communications manager for the Bermuda Business Development Agency (BDA).
The latest Moon Bermuda guide offers itineraries geared to romantic getaways or kid-friendly holidays, extreme sports suggestions, as well as parish-by-parish tours and detailed contextual background on everything from Bermuda’s history and government to its economy and flora and fauna.
“As Bermudians, we know our favourite fish sandwich, the coolest sunset cocktails, where to go cliff-jumping or to buy flip-flops, what to do over Cup Match, that North Rock has some of the most eye-popping snorkelling,” says Jones. “These are the highlights I’ve tried to emphasise, so visitors can experience the real Bermuda—the way we do.”

Moon Bermuda is available at Bermuda Bookstore and at all major North American, UK and European booksellers, as well as online retailers including www.amazon.com.

The unfolding history of the Town of St. George is seen through the eyes of the inhabitants of Tucker House in a book published recently by the Bermuda National Trust—Tucker House: The Story of a House, Its People & Its Contents.
The museum focuses on Henry Tucker and his family, who lived at the house on Water Street in St. George’s from 1775 until 1807, but Tucker House has been home to many other interesting people and the book also tells their story.
The house was built in the mid-eighteenth century for Captain Thomas Smith, a ship owner and merchant. It had a clear view of the harbour, and the captain and his family lived upstairs over spacious cellars. St George’s was then Bermuda’s only town, its seat of government and a busy port.
Henry Tucker, after whom the house was later named, was a leading administrator in the island’s colonial government. He lived there during the time of the American Revolution and the so-called Gunpowder Plot and made several additions to the house.
Enslaved members of the household worked and most probably lived in the detached rear kitchen as well as in the cellar kitchen added by the Tuckers, now the site of the Archaeology Exhibit. Mary Harvey, widow of eccentric lawyer Benjamin Dickinson Harvey, owned the house in 1834 when Bermuda’s slaves were emancipated.
Her unmarried daughter, Althea, lived there during the American Civil War, which saw St. George’s turned into a bustling boom town. It was at this time that Joseph Rainey, who later became the first African-American to serve in the US House of Representatives, ran a barber shop in the former detached kitchen.
The Bermuda Historical Monuments Trust, forerunner of the Bermuda National Trust, bought the property on the eve of the Second World War from 80-year-old Emma Boggs who had lived there, without electricity, since the age of 17. The Monuments Trust opened the house as a museum in 1953.

Tucker House: The Story of a House, Its People & Its Contents was researched and written by Diana Chudleigh. Contemporary photographs were taken by Ann Spurling, and the book was designed and laid out by Dace McCoy Ground. Funding for its printing was provided by David and Joy Tucker. The 68-page book is available for $10 at Tucker House and the Globe Hotel in St. George’s and at Waterville in Paget.