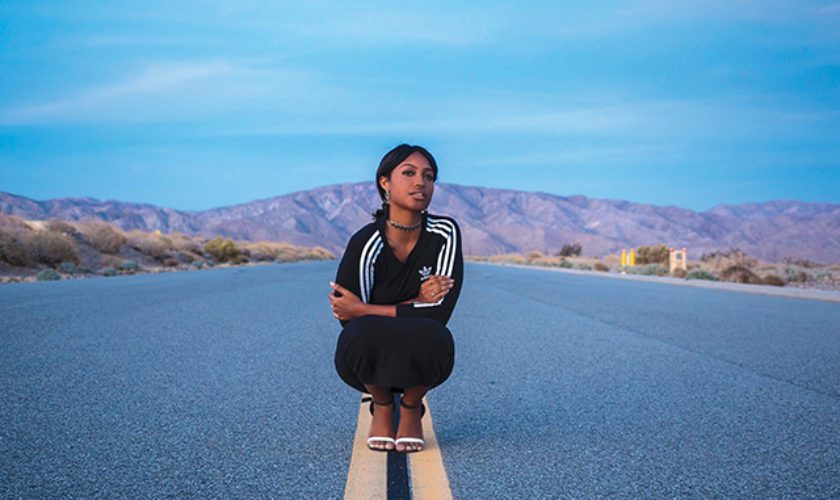 When Bermudian Canjelae was in fifth grade, she was caught singing in the bathroom stall at school.

“I thought I was going to be in so much trouble, but it turned out the teacher was just mad that I didn’t tell anyone I could sing!” she said.

This was the point at which Canjelae—as she is now professionally known in the music industry—was first discovered. Today she is featured on Quincy Brown’s single “Sunshine,” which she co-wrote with artist Reo Cragun. Her resume also includes working with many talented artists and musicians including Timbaland, T.I. Akon, Chris Brown, Al debarge, CyHi Tha Prince, K Kamp, Scott Storch, Nico and Vinz, and Don Corleone.

“It’s always fantastic when you can meet another music lover, especially when you’ve grown up listening to them,” Canjelae said. “I’ve learned so much with each interaction, and I consider myself really blessed to be among the new generation of musicians who make music for a living.”

Canjelae didn’t recognise her musical ability at first. She considered herself like everyone else, enjoying Bermuda summers, afternoon bus rides from school and ironing school uniforms early each morning. She has been singing for as long as she can remember, but she never knew she had a talent until she was eight or nine years old.

“In church everyone could sing, so I didn’t think I was any different from anyone else. Plus, I was pretty shy. I used to lip-sync to the songs in children’s choir!” she confessed.

Canjelae attended Bermuda Institute, Somersfield Academy and Bermuda High School. She credits vocals coaches Danny Hill, Dr. Gary Burgess, Marcelle Clemens and Ruzelda Severin as teaching her different and important techniques she has since taken with her in her career.

“I love singing my songs because I can share my truth in a way that’s relatable,” she said. “Music was such a big part of my life growing up. Songs were so anecdotal. Aaliyah was the big sister who convinced you to try again, Lauryn Hill and Destiny’s Child were the cousins that told you how sometimes guys only want one thing and sometimes in the end all you have is your girlfriends or just you.  I watched how Whitney’s voice would pierce right through to so many hearts and from then on I knew I wanted to reach people that way.”

Canjelae is currently working on her first solo project, TIDES. She has written all the songs and hopes it is the very first of many albums to come. She credits her team and her “sheroes” Traci Ellis Ross, Barbara Streisand and Beyonce, whose work ethic, tenacity and drive are unmatched in her eyes.

“They inspire me to push the envelope continuously,” she said.

She also finds inspiration in everything from personal relationships and struggles to conversations and stories she hears and reads. In her downtime she said she loves bonfires, binge-watching her favourite shows, painting and hiking.

“All in all, I sing because it’s therapy, and if working through my obstacles and putting those messages of love out there can positively impact someone, well, then I’ve done my job.”

You can follow Canjelae on Instagram @canjelae for the latest updates on TIDES and the single release. You can also buy Quincy’s song “Sunshine” on iTunes and hear her on the chorus.