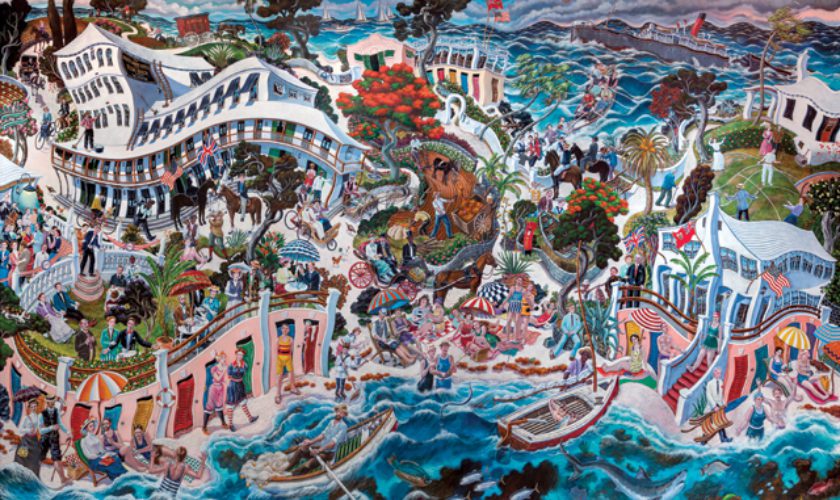 By his own admission, Graham Foster always knew he would devote his career to the making of art but perhaps he didn’t predict that one day he would literally make history. In 2009 he completed his mural in the pillared hall of Commissioner’s House at the Royal Naval Dockyard, compressing over 500 years of Bermuda’s history into just 1,000 square feet of wall space. From that time he has established himself not only as an artist and sculptor but also as one of Bermuda’s most important illustrators and historians. In 2013 he completed a mural for the Bermuda College Library which illustrates the works of Bermudian writer Brian Burland. Now he has completed yet another mural depicting the history of the Elbow Beach Hotel. “Around a year ago, I was contacted by Elbow Beach’s consultant Harry Kromer,” Foster explains. “He told me the hotel’s general manager, Ed Burns, was interested in having a mural created. I met up with Harry at the hotel, and he showed me the mural space: two one hundred-square foot walls opposite each other at the entrance of the newly renovated conference rooms. After some research, I painted two 1:12 scale colour miniatures which gave a pretty good idea of what the final mural might look like. I dropped these off, and things went quiet for a while, then I got the call from Harry saying I had the job.”

The mural, acrylic on plywood, is now displayed in all its glory. The first wall focuses on the hotel’s beginnings in 1908–1940, while the second concentrates on the 1940s to the 1990s.

Research is always key to Foster’s preparation since anachronisms have to be avoided. What were his sources? They include a book written by Roger Crombie commemorating Elbow  Beach’s 100th anniversary, numerous photographs,  newspaper articles, old hotel brochures, the Internet and, most important, conversations with people who have worked or stayed there. But of course Foster’s rich imagination and his  skill as a painter transmute his information into an extraordinary flow of swirling vibrant images, allowing his audience total immersion into Bermuda’s  history of hospitality as experienced at Elbow Beach.

As is true of the Hall of History, Foster not only captures important events in the hotel’s development  but also evokes the lifestyles of both locals and guests, by paying amazing attention to detail—from the clothes they would have worn and the transport and equipment they would have used to the details of environment they could have observed.

The images’ chronological order flows from left to right and so on the first wall in the top left corner a male figure is driving a horse and cart containing vegetables. He began the hotel’s story. “There are no central characters or exact likenesses in this mural,” Foster explains, “but he does represent the hotel’s founder and first owner, Richard Berry Johnson. I figured he was a hands-on guy.” Johnson was an Englishman who had immigrated to Canada to set up his farming business. Forced to leave Canada because of his wife’s ill health, he moved to Bermuda’s warmer climate, bought this property from the Crown and, against locals’ advice, eventually built what he was to call The South Shore Hotel right on the dunes he named Elba Beach. But the property also had arable land so that in the mural he is driving past farmland used to cultivate vegetables that would feed the guests. In the centre of the mural, farm labourers till the earth with a donkey-driven plough, pull carrots and dig in Sargassum seaweed carted from the beach.

Horses are plentiful in this wall of the mural—as a means of transportation and of outdoor activity for guests and locals alike. In the background are red-coated riders, a reminder that Bermuda once had a Hunt Club, while a horse pulls a cart full of ice blocks before Bermuda had the benefits of refrigeration. Some figures ride bicycles rather than horses. Boats abound as well—depicted in the background are sailing boats and in the foreground fishing row boats. Top right is a steamship, broken and floundering in fierce white-crested seas on the reef, below it, a whale boat to the rescue. The BR. S.S. Pollockshields actually was shipwrecked off Elbow Beach on September 8, 1915. The whale boat was captained by Antonio Marshall, rescuer of all the crew save the ship’s captain who drowned while trying to save the ship’s cat and kittens.

The transportation theme continues left to right chronologically in the second mural with the introduction of cars and motorised bikes. Taxis and rental motorbikes at the Frances Barnett Autobike Livery were now available for guests. The Hillman, Morris Traveller, Morris Minor, Ford Popular cars and a VW van all make an appearance as do the early Zündapp and Moybylette motor bikes.  Whereas in wall one, the sea dominates, in wall two Foster shows us that traffic has taken to the skies—above the horizon a flying boat, perhaps the Cavalier, comes in to land, as does a Constellation propeller plane from Eagle Airways. And a more modern jet plane flies over a more modern cruise ship.

Historical and social change is also of course reflected in costume and fashion. Foster has paid meticulous attention to this, particularly in wall one where he depicts bathers wearing early, cumbersome swim suits outside the bathhouses, which were a distinctive feature of Elbow Beach until they were destroyed in Hurricane Fabian in 2003. The sheer amount of clothing he has painted both men and women wearing as they lie on the beach, sit outside on patios, play tennis or golf (at one point Elbow Beach had its own golf course) is shocking to those who have experienced Bermuda’s fierce summer heat. How could the men bear to be in hats and suits, the women in long skirts and stockings while they danced to live band musicians, also formally dressed? The answer is that the tourist season was winter until after the Second World War when people began to flock to the island during the summer. During the 1920s and ’30s many guests came from the US for an escape from the prohibition of alcohol.  Foster playfully reveals this in the drunken, dissipated, albeit formally dressed, look of a few men—one figure has to be supported by his wife as he topples down some steps. Alcohol flows freely in the patio area on the left of the painting. In the centre, however, the Gosling’s wooden crate accompanying the driver of a horse and carriage for guests is filled with glass mineral water bottles, complete with their distinctive marble stoppers.

The second half of the mural starts on the left with the Second World War soldiers, many of whom were billeted at the hotel. A military staff car and jeep can be glimpsed entering the property. Perhaps because of the American influx and influence, the formality of the pre- Second-World-War period gave way to a freer lifestyle altogether which Foster clearly shows in wall two.  The guests are far more scantily dressed, especially on the beach where a young woman dressed in a bikini makes for the sea.  Sunbathing for the purpose of tanning is now acceptable.

Entertainers are less formally but more colourfully dressed—the Talbot Brothers of course, as well the Gombeys, unique to Bermuda.

Naturally the mural shows key developments to the hotel so that in wall two a formal foyer replaces the former porch, while the addition of a swimming pool offers more water activities. And new cabanas overlooking the pool meant a different, less formal kind of accommodation. On the left of the second mural, the new Elbow Beach Surf Club, built in 1951, was for many years the headquarters of the North American College Weeks guests. They would crowd the hotel and sometimes get up to all kinds of mischief, such as catching a cow and keeping it in one of the rooms, an anecdote Foster heard from a former hotel employee and could not resist including in the mural.

Perhaps what is particularly noticeable in his work is Foster’s inclusion of workers, all contributing to the hotel’s success. The farmers have already been mentioned. There’s a man digging sand (wall one) to make cement, a woman working in the hotel receiving a fish, presumably to cook, a man carrying an ice block on his back,  another whitewashing the roof of the hotel. Foster also pays attention to the environment. In wall one, there’s not a kiskadee in sight because that bird was not introduced to Bermuda until 1957. Instead he paints a European goldfinch, a red bird and blue bird. In the second mural we can see the kiskadee as well as the yellow night-crowned herons introduced in the early 1970s.

Now open to the public, Foster’s mural will be an invaluable visual resource for history buffs, teachers and students who will be able to see a thousand historical details come to life in these two spaces.