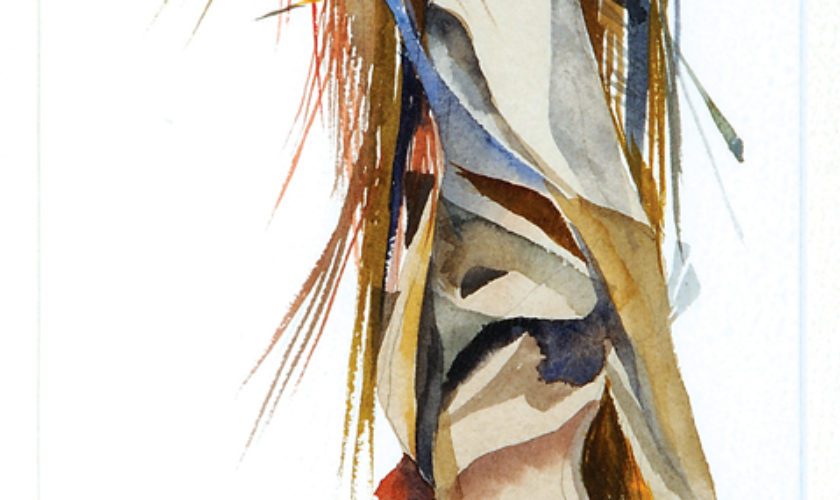 Bermudian artist Molly Godet was completely surprised at her recent Charman Prize win for her exceptional watercolor painting Green Man Gombey. Now in its fifth year, the Charman Prize is sponsored by John Charman and given by the Masterworks Museum of Bermuda Art at the annual community art competition. The winner receives $10,000 and the prestige of being selected by international jurors as the best in show.

“Winning the Charman Prize is not only a huge surprise, but now it has introduced me to a wider audience and has fulfilled a completely different judging criteria, which is rewarding in itself,” the artist says. “It is very humbling to be selected. I don’t think it can get much better.”

Godet began her career with a degree in graphic design from Hornsey College of Art in London in “the late but still swinging sixties,” as she puts it. Upon graduation, she worked as an art director for advertising agency J. Walter Thompson and later as senior art director and European creative director for French multinational Publicis. “I spent my professional life in London until I negotiated early retirement in 2005 and returned to live in Bermuda with my late husband,” she adds. Their two children currently live and work in London, where her daughter is a fashion director and her son is working toward his master’s degree in fine art at the Royal College of Art.

“London was then globally recognized as the creative gold standard for advertising inventiveness,” says Godet. “I was fortunate, over time, to win all the major British and American awards for various clients. And I am told that some of my work is held in the advertising archives at MOMA.”

However, for Godet, painting as a passion came later in life. “Painting wasn’t taught in the art colleges in the sixties, at least not in the trendy London ones. We were somehow supposed just to know how and consequently didn’t.”

Although she divides her time between Bermuda, the U.K. and Spain, she only paints in Bermuda. “Bermuda constantly provides me with subjects that interest me,” she explains. “Quirky little details that capture my imagination and furnish a dialogue for a picture—be it a strange tree, a weird juxtaposition of objects, a huge clash of colour or merely a strong graphic series of strata or angles.”

Godet says that watercolour is her favourite medium, albeit one of the least forgiving, and she credits local artist Christopher Marson with encouraging her to pursue the medium that eventually led to the prestigious Charman win. “Watercolour is definitely my favourite medium thanks to Bermudian master painter Christopher Marson, who patiently tried to initiate me into the vagaries of this strange, almost living, means of getting colour onto paper while I railed and despaired,” she says. “It is such an exciting way to paint, as you have to fight it every step of the way [because it is] totally disobedient and endlessly interesting. It really argues, and it’s very satisfying when you bully it into submission.”

While in Bermuda, Godet likes to paint with the Plein Air group that meets every Sunday morning at various locations around the island. With some of Bermuda’s best artists painting in one place, it is, Godet says, a “free master class. If it wasn’t for having been bullied in the nicest way to join them, I would still probably be sitting about saying that I would try and paint one day.”
For Godet, Green Man Gombey is unintentionally a small painting; she just used the paper she had on her when she went on location at Gates Fort. Instead of the old fortress walls and stunning views, a simple palm tree caught her attention that day. “I went all the way to Gates Fort only to be fascinated by a palm tree that seemed to have had another and more interesting life,” she says. “And it was certainly dancing hard in the strong wind that was blowing that day.”

After the Charman Prize exhibition closes, Green Man Gombey will become part of the Masterworks Collection of Bermuda Art. “One day,” Godet says, “a retrospective of Charman Prize winners will be a fascinating and sensational exhibition in its own right.” We couldn’t agree more.