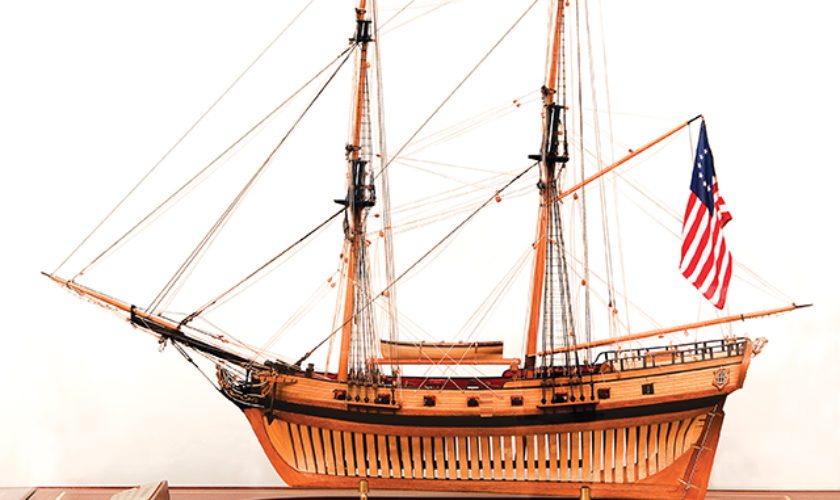 The Masterworks Museum of Bermuda Art has acquired an exhibition-quality model of the “Bermuda-built” brig Fair American, which was commissioned as a privateer during the American Revolutionary War and commanded by Captain Charles Morgan of Bermuda.

The beautifully constructed scale model of the 14-gun brig was assembled by renowned American model builder Michael Costagliola (1919–2011), based on a contemporary Royal Navy model. The hull features mahogany planking over boxwood frames and head rails that support a female figurehead. The model is rigged as a brig, with bowsprit, masts, spars, trees, tops and standing and running rigging.

The Fair American is described by Bonhams Fine Art Auctioneers as a Bermuda-built brig, either constructed in Bermuda or made using Bermuda sloop lines in about 1776. The vessel was a US-flagged privateer during much of the Revolutionary War.

“The Fair American is an important addition to Masterworks’ collection of ship models of importance to Bermuda’s history. This is yet another attraction for museum lovers, nautical fans and history buffs. Morgan’s ghost lives large and has come home,” said Tom Butterfield, founder and creative director of Masterworks.

The model’s planked and tunneled deck is detailed with pin and fife rails, bit post, capstan, hatches, a ship’s boat on a raised frame, pumps, a ship’s wheel, boxed compass, ladders, skylight, US flag and other details.

According to Bonhams, the Fair American was commanded by Captain Morgan, who was granted a privateer commission by the governor of South Carolina in November 1776. Morgan was a member of a Bermuda maritime family that reportedly supplied the whaleboats and oarsmen who helped transport stolen British gunpowder to US vessels off of Tobacco Bay during the “Gunpowder Plot” of August 1775.

In June 1777, the Fair American (one of two vessels bearing that name during the Revolutionary War period) and a consort were reported to have conducted an unsuccessful raid in western Bermuda and, later, a successful raid on a British sloop.

Fair American was taken into the South Carolina Navy in December 1777 and resumed her privateer career in the West Indies in May 1778. The vessel was captured by the British in 1782.

The Fair American model will be displayed as part of Masterworks’ 30th anniversary celebration in January 2017. In the meantime, it can be viewed by appointment at the museum.